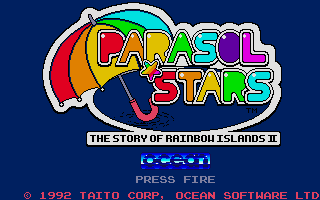 Lots of colour. A little taste of what is to come. 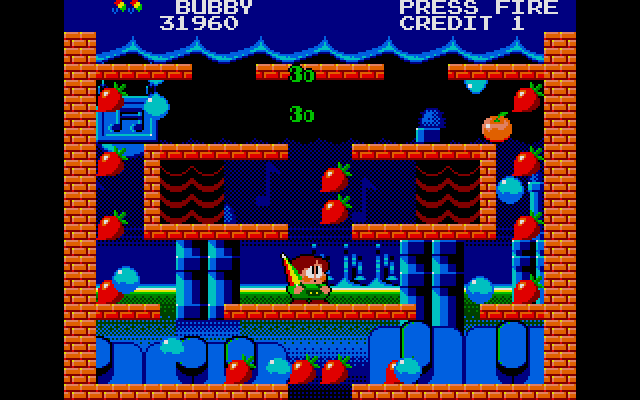 Man I sure hope he likes radishes. 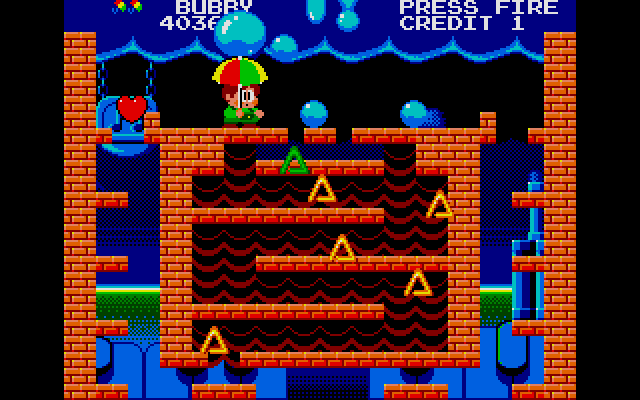 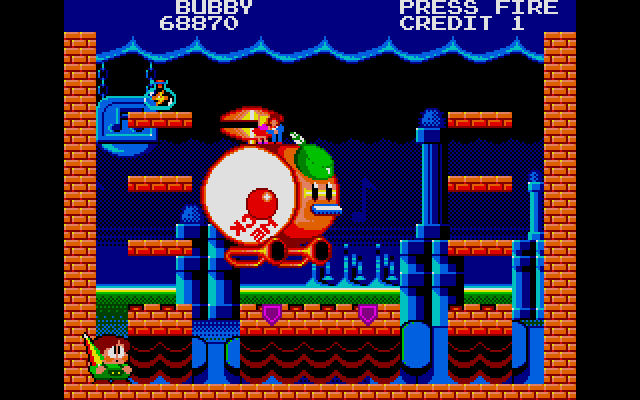 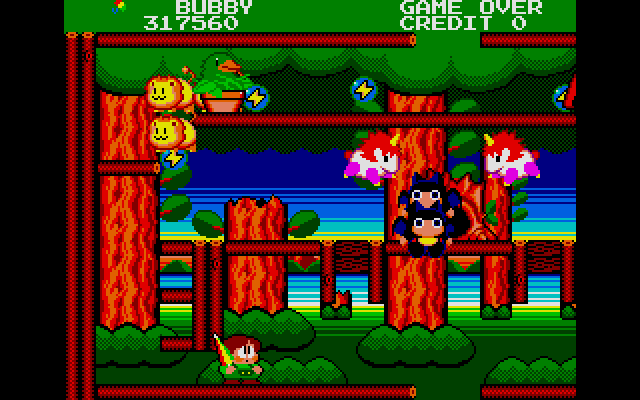 The second world, look at those creepy bats! And those unicorns ... brrrrrrr... 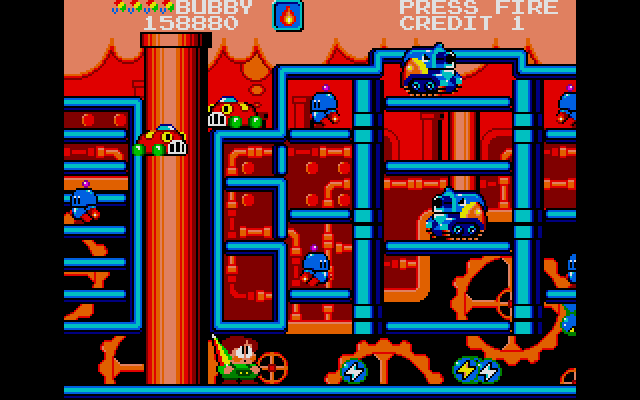 This is where it is starting to get hairy. Just when you think you cleared a stage, a baddie is hiding behind those flip screens. 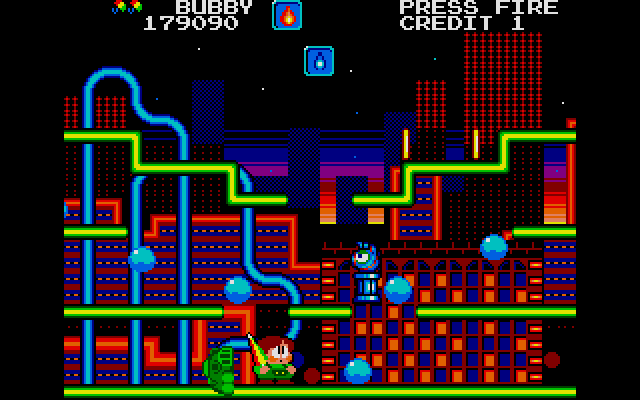 A beautiful looking game it is for sure! 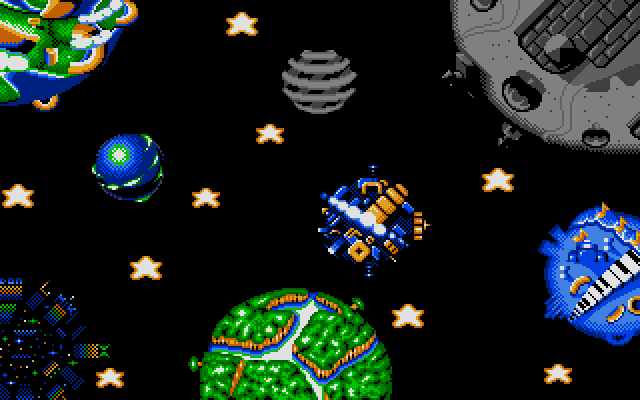 Each world is presented on this map. 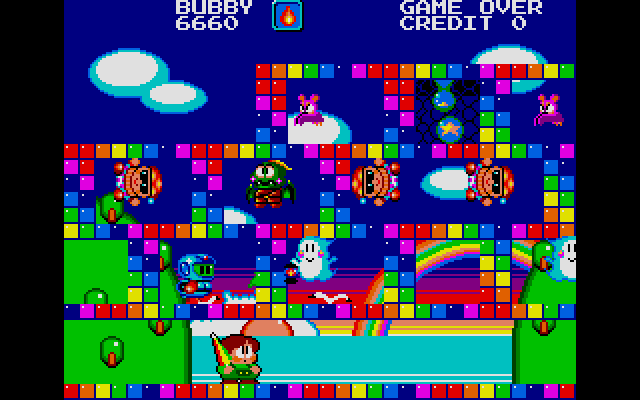 The final world is pure mayhem, with enemy fire all over the place.

So last month it was finally time to make my little nephew happy. He is 9 years old now and really wanted to get into those awesome 16-bit home computer games. (I wonder who gave him that idea ;-) ) Since I didn't have a decent Gotek for the Atari ST, and working with floppies these days can get tiresome (especially for his generation, I guess), I donated the next best thing, a shiny Amiga 500+. Perfect for playing those classics...and it is also nice for me to hear the PAULA versions of the games I grew up with. And even though my sisters' kids already have an XBOX 360, still they wanted to play on the Amiga. And they are loving every bit of it (all 16!). I guess nothing beats sitting with friends or family on the couch for some fierce 2 player action (and an occasional swear word)...

Of all the recommendations I did, they're completely hooked on Parasol Stars. Funny thing is, I have never played Parasol Stars properly in my life, yet I came up with it in my list without putting much thought into it. Everybody used to like it and it got rave reviews on just about every platform, so why not? The only experience I had with it was the Game Boy version, but I quickly turned to other games on that system. Still, I consider myself a huge fan of these, as I call them, single screen platformers - although why do I keep calling them like that? Most of these take at least 2 screens, yet it doesn't feel that way to me. I have spent countless hours on games like Bubble Bobble, Pang, Rodland, Bombjack and many more. And not only for their fantastic 2 player modes. I played these with my friends and even my little sister. I remember her booting up MY ST to play Bubble Bobble with HER friends. (Damn it!)

And even today I'm hooked. When I visit the yearly computer club, guess which games I boot up (apart from the obligatory Super Cars 2 and Speedball 2 sessions) ... yup, you got it right, Bubble Bobble and Pang it is! Last month I checked the awesome Crash Time Plumber (a single screen platformer with super smooth 8 way scrolling, right? *sigh*) and before even noticing, I wasted a whole afternoon on it. I just love the genre. Yet I never ever got around playing a classic like Parasol Stars. So let's get started and see how this thing compares to the other fan favourites, shall we?

An exploding array of colour. Compared to Bubble Bobble, Parasol Stars is alive and kicking. Big cutesy sprites bounce to every region of the screen without any apparant slow down. In later, bigger levels, we are treated with some flip-screen scrolling. But it doesn't matter. Parasol Stars is a beautiful game.

Just like the other Bub and Bob games, this one is filled with addictive YM chiptunes. They are meant to stay in your head...and they do. And I could swear the tune from the first boss is a ripp off of the Lambada by Kaoma. Listen to it!

So the story to this game continues where Rainbow Islands stopped. After handing over their magic parasols at the end of the previous game, Bub and Bob's well earned vacation is abruptly shattered by the evil Chaostikahn and it is up to them to, yet again, rid the world of him. There, that's it. Script-worthy stuff indeed ...

When I first started playing Parasol Stars, the gameplay felt very familiar - which is a good thing. However, it soon became clear that this game is actually Bubble Bobble on steroids. There is so much going on it makes your head spin. Baddies are flying over the screen, stages get constantly filled with bonus goodies, sometimes you just don't know where to look first, but you get used to it. After 2 sessions I had the feeling I was missing out on things and had to read the manual again before I could continue. And I find this a bit of a negative for a game of this kind. Simplicity should be key.

While there are similarities to Bubble Bobble, this time the main heros are equiped with parasols (duh!). You use these to defend yourself or stun enemies. If a baddie (or in this game perhaps a cutie?) comes in contact with your parasol, it is stunned and turns into a blue or green color (a bit like the way an enemy was trapped inside a bubble in the first game). Then it is up to you to run into it to have it transformed into a bonus item. But there is more ... oh yes, much more. You are also able to grab enemies with your umbrella and throw them against each other for extra combo bonus points. Other weaponary items appear as well, like raindrops, or fire drops. If you collect 5 of these drops on your parasol, a super drop appears which can do massive damage. E.g. when throwing away a super raindrop, a massive flood is created dragging everything in its path. Some levels contain bigger monsters which incubate other baddies, like the pianos in the first world. These can only be taken out by throwing things at them.

There are 8 worlds for you to complete with 5 or 6 levels each, and all of them end with a boss stage. This is an awesome touch and adds to the console feeling of the game. At these boss stages you need to collect a temporary super power to finish off the bad guy.

During the levels you are also able to gather special powers. Things like the 'shoe' item makes Bub (or Bob) run faster, a 'ring' item, which unleashes a deadly star or the 'clock' item which stops time. Oh, did I mention there is a time limit? After a while the 'Hurry Up' sign appears and the baddies start flying all over the place at twice or three times the original speed. Fun fun fun!

Finally there are 3 types of magic items to collect. Once collected, these will appear on the top status bar and are kept during the progress of world you are attempting. If you manage to grab 3 of these, bonus points are awarded. If they are all the same (jackpot!!), a door will open for you.

There are tactics involved in this game as well. Something to learn is opening your parasol above you and jumping up straight into enemies. Problem is, to open the parasal above your head you press down + fire. To jump you press up. So practice this as this might be tricky at first. Also, prepare yourself for some serious frustration once your opponents have the ability to shoot back at you.

With Rainbow Islands Taito created something completely different, not my cup of tea. Parasol Stars takes the ideas of Bubble Bobble and added some extra flavour. And although still a very good game, I feel they overcooked it all a bit. It has become a bit of a nervous experience and while not rocket science, it lost some of its simplicity and charm. If you want a better looking, colorful, single screen (but don't call it that!) platformer, Parasol Stars is not a bad choice, but I would prefer Magic Boy instead. The 2 player mode is great fun, it just isn't Bubble Bobble fun!