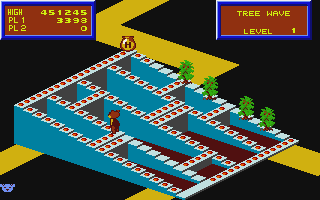 And to think this game would be an asteroids clone! It would have been called 'Toporoids', a contraction of the word TOPOgraphy and AsterROIDS...That just doesn't sound right to me! 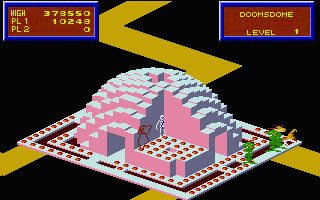 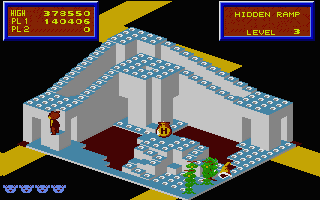 Strange fact : Crystal Castles was one of the first games to have a real ending! 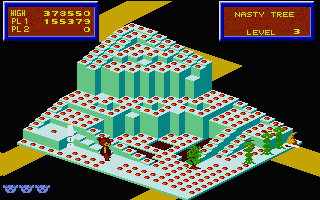 An extra 1000 points reward for that delicious honey! 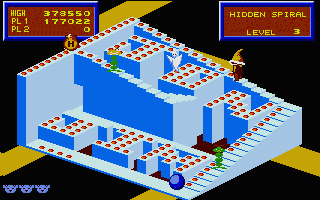 Crystal Castles is a game that could have easily been written by Disney! The background story sounds like a fairy tale and characters seem to have escaped from one of their movies...Here is a piece from the manual, to give you an idea :

"Once upon a time, Bentley Bear was rambling through the woods, daydreaming about poached salmon. He stopped to take a nap in his favorite hollow tree trunk. But when he awoke, he found himself inside a huge castle glittering with diamonds, emeralds, and pearls. Though Bentley didn't know it at the time, he was trapped in Crystal Castles, home of Berthilda the Witch and her evil cronies. To escape their spell, he must harvest the gems in the castles before Berthilda and her malicious gang send him into permanent hibernation."


But every retro gamer knows by now that "Crystal Castles" is one of the many arcade hits from Atari themselves, dating back from 1983! Interestingly, Atari wanted it to be the first 3D Asteroids clone; shooting the incoming asteroids above 3D maps. But when the game was finally finished, they found out it didn't really work and changed it to its form as we know it today, a sort of 3D pac-man clone!

The graphics are good, but nothing special. All the maps are in 3D and nicely detailed. Every level comes with its own color scheme and appropriate enemies!

A dull intro track and some VERY annoying sound fx! But I guess that's part of what makes the game so nerve wrecking, and in the end...Addictive!

As mentioned above, Crystal Castles is a 3D Pac man game. As Bentley, It's your job to collect all the gems in a level, while avoiding all the nasties that guard them. You have the ability to jump, making you unreachable for the enemy! Or you can catch them while they're eating your precious gems. If you manage to do this for all the levels in the 10 worlds, you'll be rewarded with a happy ending to the story.


Creatures you'll encounter on your journey are walking trees, ghosts, skeletons, centipedes...And every now and then, a dangerous swarm of bees. They will try and make your life miserable if it takes you to long to complete a level!


Every map has its own hidden rooms,level warps, elevators and bonuses. for example, If you manage to grab the honey jar, you'll score extra bonus points. But beware, this pisses off the bees. There is also a magical hat which makes you invincible for a short period of time. In every final level (the 4th) of each world you'll meet Berthilda herself. The only way to get rid of her is to walk straight at her with your magical hat! You'll be rewarded with even more bonus points if she is eliminated...


The controls in this game are very good! You use the stick to move the main character, pressing the fire button and pushing the joystick in the appropriate direction, makes Bentley jump! It takes a while to get used to the 3D environment though. You'll be hitting yourself when you get stuck behind a wall, or when you aren't able to get on an elevator in time, only to get caught by a damn walking tree! And keep in mind...Bentley is very fast...And that can also work against you!

Crystal Castles is a very addictive game! It's not just any pac man rif, the 3D environment adds a lot to it. You'll be trying again and again to complete it! But be warned, it can be frustrating as hell. This game is yet another example of simplicity, but amazingly executed. And in the end, that's all that matters. Another hit from the masters of the computer game...Atari!