I still remember those rainy days, playing computer games all afternoon with my buddy. First playing as a perfect team, but the further I progressed in the game, the higher the tension got, and the more heated the conversations went. Until I finally snapped! My friend did something which prevented me from entering the next round! Just great ... I think this sounds familiar to most of us! This effect can only be caused by playing a tension-filled game ... and Super Cars 2 is such a game!


This genre is almost invented by Atari themselves. It all started with "Super Sprint". After that we had "Badlands" and "Ironman's Offroad" and in 1991, a company called "Magnetic Fields" (of "Lotus" fame) created the cherry on the ice cake, "Super Cars".


The game we're reviewing is the highly successful sequel to this game. Focussing more on armament then racing, the player is treated with an exploding top-down racing game!

The graphics are nice for this kind of game. Landscapes are all nicely detailed. It all looks very clear. Scrolling is good, everything moves fluently on our screen.


A great intro track! It'll stick in your head for a while. In-game sound effects are mediocre. We get the usual engine sounds and some tire screeching.


This isn't your regular "Super Sprint" clone. "Super Cars 2" adds a lot more to the genre. There are 3 levels of difficulty (being easy, medium and hard...Duh). Each level has a number of tracks that have to be completed to enter the next level. The easy level can be finished pretty fast. It's in the next 2 levels where the fun really starts! Here we are introduced to more complex tracks, with crossover, jumps, sliding doors and even railroad tracks! That's right, you read it correctly, and there are loads of trains, I can assure you!


A really great part is the ability to upgrade your car. After every completed track you enter the shop. You can buy new tyres, extra armour, a completely new engine, and so on. Don't forget to enhance your car with some rocket launchers to make your opponents life a living hell! You don't need your driving skills to pass the opponents, just blow them of the track! You start off with three regular front and back rockets. But when you manage to earn enough cash, you might want some guided missiles, or mines, or maybe some battering rams, so you can bump your enemy to burning pulp!


Another nice feature are the subscreens. After every track, you'll be questioned! If you answer every question correctly (or give an answer they like), you can earn extra championship points or cash! But be warned, you'll find yourself most of the time ripped off! These multiple choice questions are sometimes completely out of context. This feature can be switched off if you want, but it still adds to the game in my opinion.


But the biggest plus in comparison to its predecessor is the 2 player mode. This is just awesome fun. And it's recommended to play "Super Cars 2" this way, cause the AI of the computer controlled opponents isn't really that good! Though a bit limited, the split screen mode works just fine!


"Super Cars 2" is a real arcade game. The tracks are all very well done, and there are lots of them for you to explore. As already mentioned, there are lots of obstacles to watch out for. Bumping in the side will add a little bit of damage, but if you get hit by incoming enemy fire, or if you don't managed to make it when you jump, your car will explode and there will be loads of damage added! You can have it repaired in the shop. If your car gets wrecked, it will explode and the race is over. And if you didn't end up in the top 5, you'll have to try again!


Controls are good, but not very realistic. But that's no problem here, I think it even adds to the game play. It's awesome to make a handbreak turn at full speed! Hear those tires! You have the option between 2 control settings. With the first option you use the fire button to accelerate, but you can also choose an auto accelerate mode, with the fire button to brake, just like in the arcades!

Fast, Furious and Frustrating. It can be a real pain when you get blown up every second. But still, the pumping action, the tight curves, the handbrake turns and the explosions are just awesome fun. Just pop in the disk and start blowing up cars, avoiding incoming rockets and jump sky high!


This is the best game in its genre, and one of the best multiplayers available for your ST! But beware, it can get intense! Recommended. 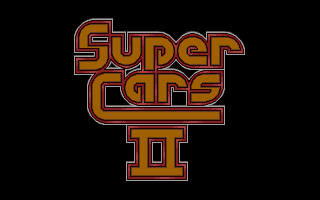 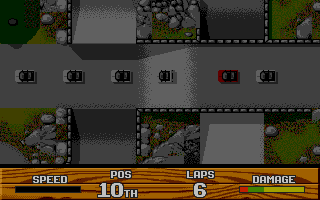 And remember children, each on their turn ... all in a nice row ;-) 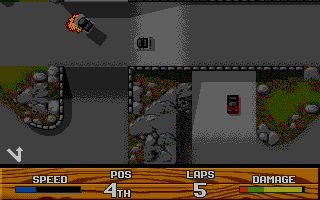 Oh, there goes another one! 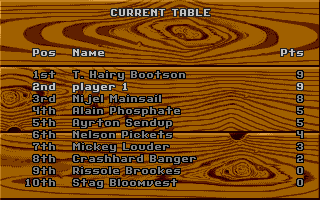