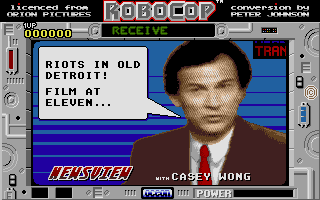 A fine example of an ugly mission screen - aww, my eyes! 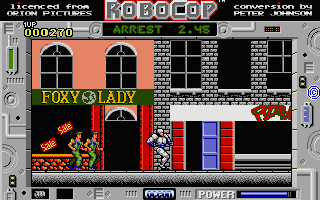 At first, you have your iron fists as only protection... 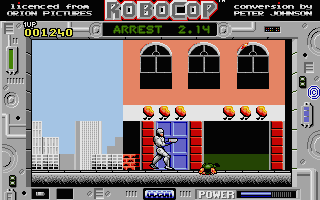 ...but when things get hairy, it's time for the famous automatic gun! 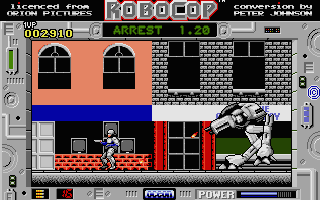 The first appearance of ED-209. This is nothing compared to the one you'll encounter further on in the game!!! 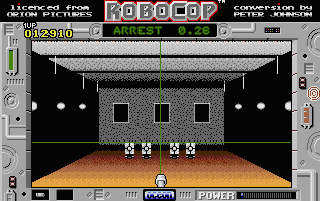 - Serve the public trust
- Protect the innocent
- Uphold the law

The robotic voice mumbles through the speakers as I load the game! Impressive! Who hasn't heard these famous few lines before? It's everybody's favorite good guy - Robocop!

Another movie turned into a game! And of course released by Ocean - or what did you expect! The Atari ST and the Amiga ports are known to be the best conversions available for the home market. Is it still worth checking out! Let's start shooting some street scumm!

I'm not impressed! I don't like the look of this game, I never liked it. If this is a perfect conversion of the arcade, well, then I definitely don't want to see the other versions. Don't get me wrong, it's all pretty clear for the eyes! And it might have been good for those days. Just take a look at the pictures on the page and judge for yourself. It looks dated in my opinion! And I just hate that border...

A conversion of the Rob Hubbard soundtrack! I just love the Robocop main theme, but the ST incarnation is pretty horrible! If you want atmospheric sound in you Robocop adventure, you'd better check out Robocop 3 by D.I.D.

By now you all must think I hate this game. Well, not really, it's actually pretty fun to play, especially if you're a fan of the movie. Robocop on the ST is a straight forward run, jump and shoot game. You start with 3 lives and its your job to kick (or shoot) the sh*t out of the scumm that attacks you to finally reach the end of a level! There are some power ups to grab (like the three way shooter), extra power and more! The game is loosely based on the events seen in the movie. You'll encounter the motorcycle gangs, you'll have to do some gun practice...


Even the famous scene where you have to save the female hostage by shooting through here skirt is recreated in one of the many bonus rounds. These are actually the most fun of the game! Controls are accurate, yet slow. Also beware, the level of difficulty is pretty high! But if you play a lot you'll know where the enemy will appear on screen, which makes everything a lot easier. Question is, will you keep up that long?

Robocop is fun for a while! I recommend to try this game only for its "historical" value, or if you're a fan of the movie! But if you wanna play a good game of shoot on your ST, I recommend you should give "Turrican 2" a try! Or "Midnight Resistance". Those games are way better!

Oh, and if you like to get passed that damn first ED-209, walk at him and shoot straight up his neck! It took me ages before I found out!