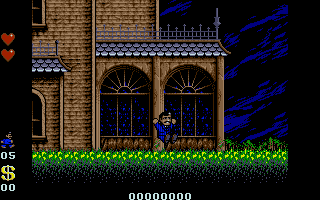 In front of the famous, spooky mansion! This is where the adventure starts... 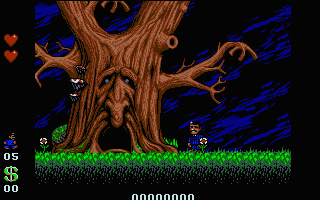 The old tree...Enter at your own risk! 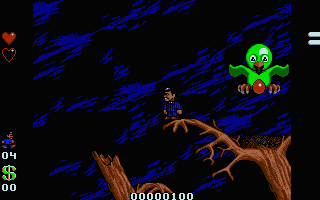 This nice surpice is waiting for you at the top of the tree! 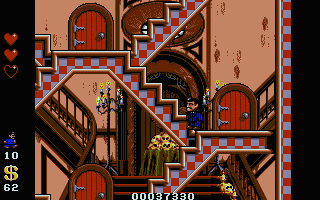 The main hall, your family members are hidden some where behind the seven doors in this room. 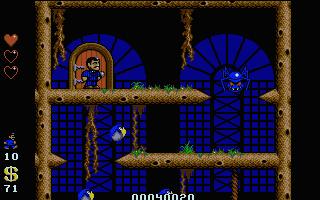 Really frustrating rooms! Watch out for the baddies and the sharp edges of the platforms, you only have 3 life points! 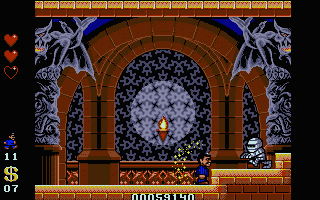 The invincibility bonus activated. You really need these things to make it through the game! 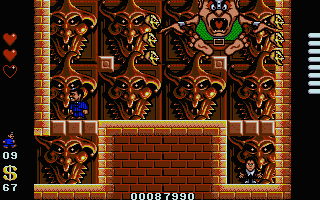 The end of level boss! This creep has captured 'wednesday'! Watch out for the skulls! 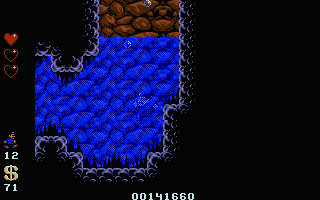 As if it wasn't difficult enough, you'll have to swim to make it out here! 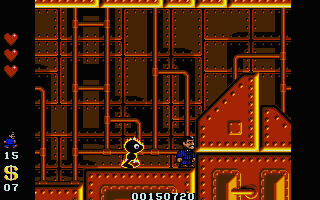 Once you've entered the oven, it's even impossible to jump on the enemies, they're too hot ;-) and you'll burn yourself!

Ocean was to be THE company with the most promising game titles ever! They always had the big movie licenses. Too bad most of their games sucked immensely! Releasing one mediocre platform game after the other! Most of the time disappointing game fanatics. Ok, they had their share of good titles, thanks to the guys from D.I.D., like Robocop 3, Retaliator...but I think they were, most of the time, just interested in the money, instead of delivering quality! There are always exceptions, and fortunately "Addams Family" is such a title!

Arch enemy Abigail Craven is after the spooky family's money. She has put Gomez under serious pressure by kidnapping the whole family and hiding them one by one in the rooms of the huge mansion! As Gomez, it's your job to find your loved ones and finish off Abigail! But behold, the house is filled with creepy stuff..."The Addams Family" is not just another platform game. You wanna know why? Read on...

The game looks great! Every screen is filled with colors! Animation is perfectly executed. The backgrounds are nicely drawn and the game features some cool parallax scrolling! All the rooms have this nice gothic look!

There is one real drawback though. This platformer uses the flipscreen scrolling method! In other words, every time we leave one screen, we flip to the next one. This can be really frustrating. But it had to be done due to the ST's limitations, I guess...

The game features the main theme from the movie, and some different songs in every room. The sound effects aren't much though...

This game is big, I mean HUGE! How they managed to put all of this on one simple disk is beyond me. That's an impossible task these days. There are tons of levels for you to explore. I don't know how many, I lost count, but I think it isn't a bad idea to start making your own maps of the rooms while playing, cause you'll definitely get lost in the mansion.

There are 7 main doors in the game. Behind every door you'll discover a different world filled with levels. It's your job to go searching for a member of the family. They are really difficult to find, not only because of the magnitude of the levels, but there are also lots of baddies to watch out for. On your quest you'll meet werewolves, mummies, spooks, zombies, flying pumpkins and much, much more! Remember, we are talking about "The Addams Family" here!

As in real platform game tradition (Mario, Giana Sisters etc.), you can defeat the enemy by jumping on their head. But make sure you hit them right on top, or you'll lose one of your three lifepoints.

If you hold down the fire button while killing an enemy, your character will jump even higher. This can come in handy to make it to those hard to reach bonus rooms! The game is filled with these. Here you'll find (most of the time) extra money or life points, but if you're lucky you'll get a 1-up! Once you've collected 100$ in cash, you'll also be rewarded with an extra life!

Other goodies to help you make it to the end are: the shield - which makes you invincible for a while, the shoes - who make you run faster and finally the fez - which turns you into a little axe! The shield is a very welcome bonus, because some levels just seem impossible to complete without it!

If you manage to make it to the end of a world (and believe me, this is a very difficult task) you'll meet the end of level boss. These guys are mostly pretty easy to defeat by jumping on their head. If you make it out alive, you'll be rewarded with a family member and a password. This password can be used to log on in the game and start over where you finished the last time. There are seven level passwords to acquire. If you ever defeat all the level bosses, enter the main door to Abigail's world...

It's also advisable to re-visit some of the rooms after you paid them a visit. They sometimes lead you to a completely new level. Or you might have the powers to enter yet another secret room! Some of the levels need to be entered again to be completed. This game just never ends!

Controlling Gomez is also an accomplishment in its own right. You see, he seems to slide on every type of floor. So frustrating, you really need to get used to this. You use the joystick to control your character. Press the button to make him jump, pressing the button several times makes him swim or fly up, but only if you have the fez bonus.

The Addams Family is a game with an extremely high frustration factor! This game is so big, you sometimes feel like giving up. All the rooms are crawling with annoying enemies. I don't understand how you can finish this game without cheating! I've been playing all day long and I managed to free one member. And I have to admit, I used the save state feature in WinSTon a lot!

Don't get me wrong here, "The Addams Family" is a great platform game. It feels a lot like Mario Brothers' games on the Nintendo systems, with the exception that it's much more difficult! I would recommend this game to all the hardcore platform gamers with thumbs of steel! One of the better platformers for the ST!