The shoot 'em up genre is old. It has been with us since the very beginning of computer games. Names like "Space Invaders" or "Galaxian" are very common to us game fans. The Atari ST had some very good shooters in its vast assortment of games. But very few came anywhere close to the quality that Thalion delivered with their release of "Wings of Death".


Thalion are known for their awesome software. They're responsible for "Enchanted Land", by some considered to be the best platform game on the ST. One of their last efforts was "No second Prize", a fast 3D cycle sim. Their software products made your ST(e) sweat, getting everything that was possible out of the machine. And "Wings of Death" is no exception... as you would expect from some of the best demo-coders on the Atari ST(e).

Fine art! The appearance of the Thalion logo alone is worth the loading time! Everything in game is nicely drawn and extremely detailed, using lots of colors. Animation is fluid, even when the screen gets filled with enemy activity! And look at the animation of the main characters, cool or what? For you lucky STe owners, this game has been enhanced, using the extra powers of this machine (more colors, better scrolling, blitter support)!

Awesome music by Jochen Hippel! He's responsible for most of the music in Thalion demos and games. Every level features its own theme! The quality is extremely good, especially considering the ST's soundchip limitations! Sound effects are just fantastic. Every time you catch a bonus, a sampled voice tells what you've just won. You have the option to play the game with sound effects only, music only or "music+" (fx + music)! High marks...

"Wings of Death" isn't an original game, all of this has been done before... just not as good! This game has a high "coolness" factor in my book. First of, you can expand your fighter in many ways. During action, all types of bonuses fly by.


You have the ability to choose between a number of different flying animals, being the dragon, the bird, the bat, the insect. Every fighting animal can be upgraded accordingly. The dragon for example has in its first stage only a little fire breath, but the more "dragonfire" powers you grab, the stronger it gets! In the final stage it blows up everything in its path.


Sadly, all of this has a down side. It is extremely frustrating when you grab, in the middle of the action, for example a bat power, just when you possessed the most powerful dragon fire. You'll lose everything and start as a little bat (which has to be upgraded again). So beware! Amongst the other supplements we have extra lives, indestructability, smart bombs, power ups and the sneaky "power down"!


There is more mayhem of course as we're talking shoot 'em ups here. Enemy activity on screen is very high. The difficulty between levels rises gradually. 7 different levels have to be completed to finish this game. In the first level, everything stays pretty normal. Just shoot the swarms of nasties to pulp. Starting from level 2, you'll have to watch the background, as some spots might harm you. When you make it to level 3, enemies will start to creep up on you from behind!


At the end of each level you'll have to face the end boss! Or what did you expect. These things look extremely cool indeed. Also notice that it takes a lot of practice to complete certain levels! You'll have to find out which type of fighter is the most appropriate to complete a level! I found the bat to be very fitting for level 2, as his weapon is good for shooting things in the background!


Your character responds quickly to your joystick wiggling. If your machine is equipped with 4 megs of ram, the level will be completely loaded into memory. There won't be any disc accessing during gameplay! There is also a 2 player mode. You and a friend will have to fly in turns!

Well, if you're a shooter fan, you'll play this game to death! "Wings of Death" is without a doubt one of the best shooters available. Personally, I think "Xenon 2 - Megablast" looks a bit better. But it's just as fun to play! A sequel to this game was produced called "Lethal Excess"... 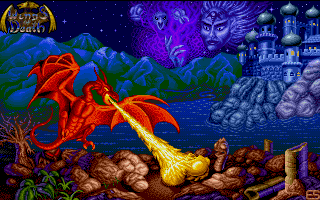 Look at all the colors! 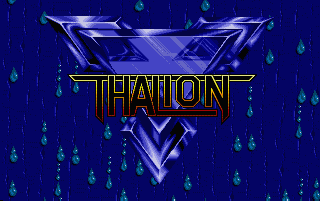 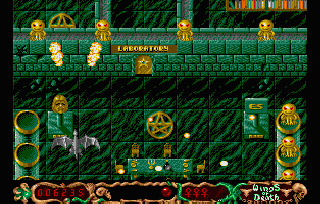 This is what you get after taking some extra fire power 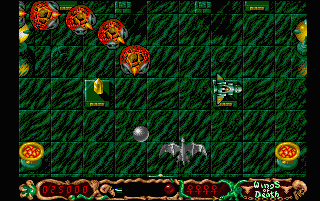 inspect the background of this screen for a while! Did you see it? Isn't that the fighter from Xenon 2? 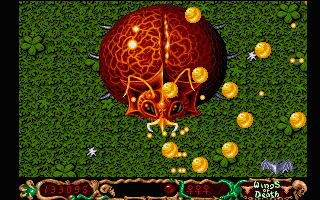 One of the many bosses you'll encounter. This one is an easy pray, especially with a full powered bat! 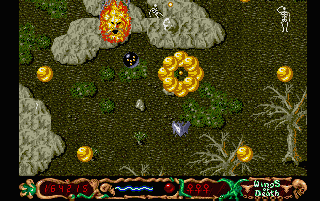 The animation of the bat is probably the best of all the fighters! 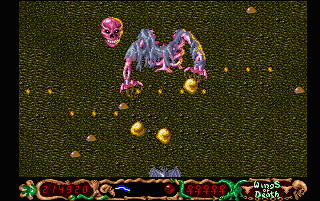 You can leave your head on :-) 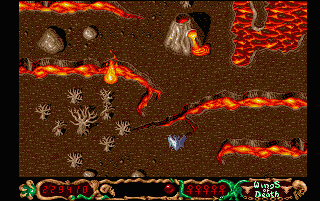 It just keeps on getting better...Level 4 sends you to the fiery underworld! 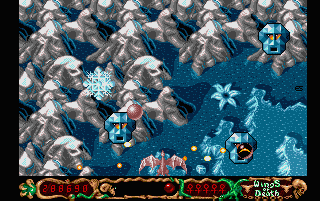