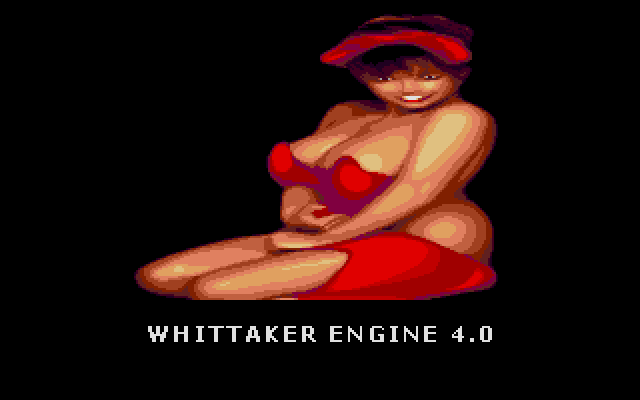 The star of the show. Cerebral's version of Maria Whittaker. 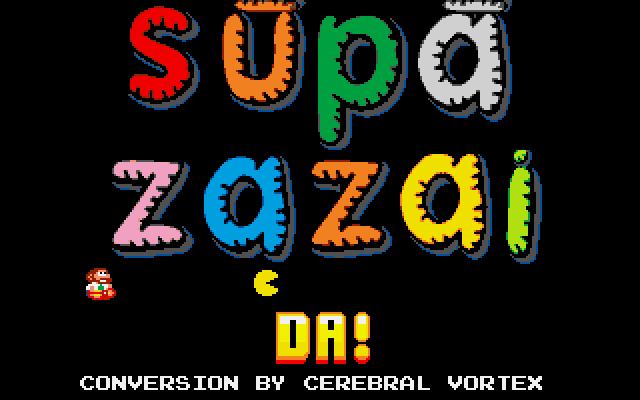 What a strange name for a game. I wonder what it means? 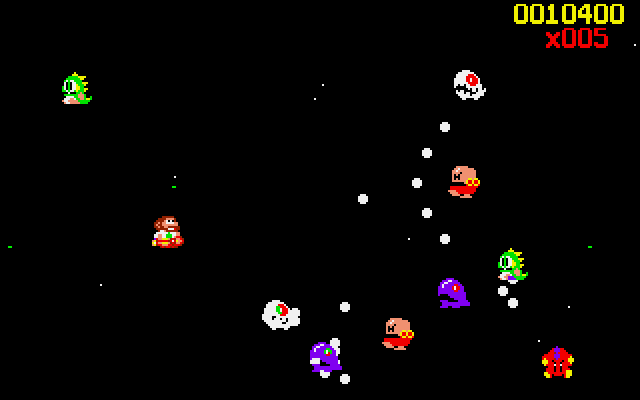 This is the Bubble Bobble level. I bet you never knew Bub and Bob were actually PURE EVIL! 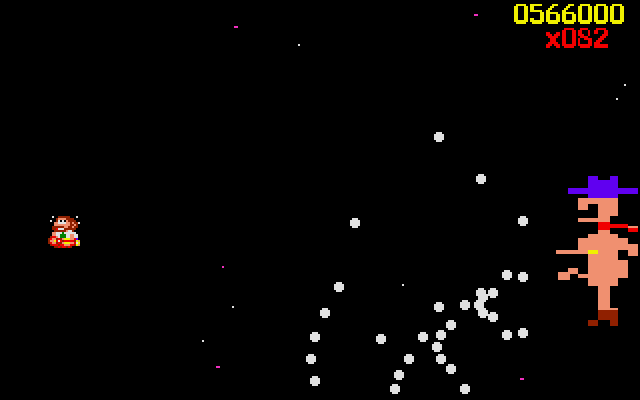 This is just hilarious. One of the 8 bosses in the game and this one is for the Atari 2600 stage. After you shoot down Frogger, ET and other classic characters, you are treated with the notorious (and completely naked) General George Custer, of Custer's Revenge fame. 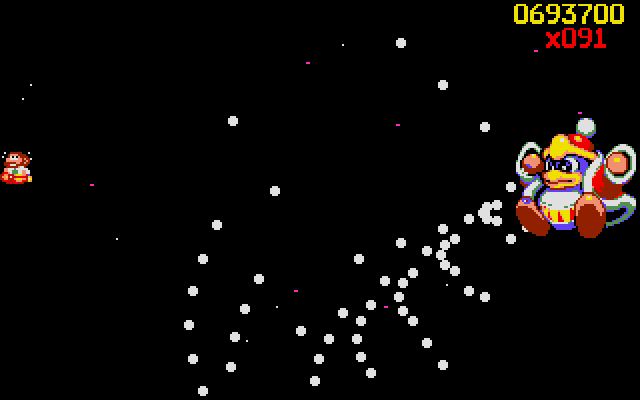 The boss from the Kirby level. Try and avoid the bullet storm! 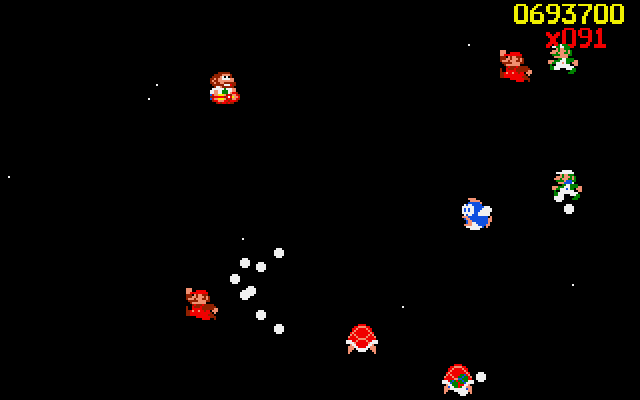 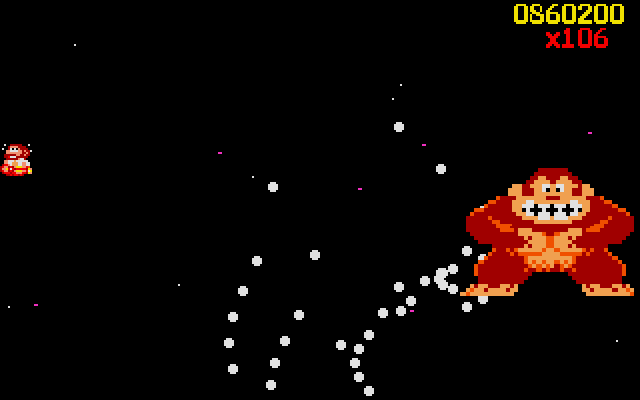 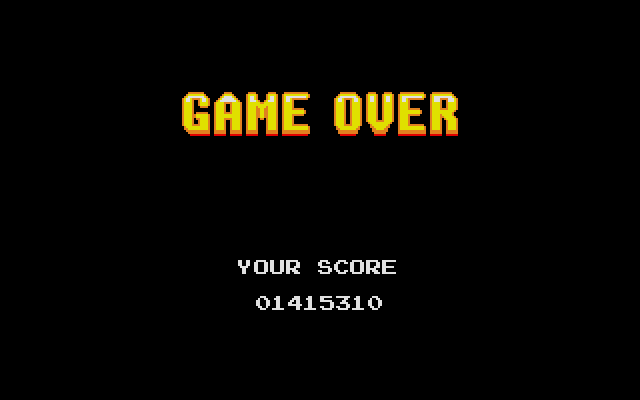 Get used to seeing this screen!

Don't you just love demo parties? I'm not a demo coder at all, but I have been to such an event 2 years ago. STNICCC 2015 in Gouda Holland, to be more precise, and I loved it. The atmosphere, the enthusiasm ... Nerds drinking beer ;-) People with the same passion start talking to each other, they come up with an idea and sometimes, great stuff happens (just look at Atari Legend).

This game is another fine example. Supa Zazai Da was the winner at the Silly Venture 2017 party in Poland. It ranked first place in the Atari Falcon/ST game competition. And when fellow Atari Legend member Brume asked me if I had time to (p)review a new game, what did I do? Well, I played it till my thumbs blistered!

Supa Zazai Da was originally developed for the PC by game coder Dr. Floyd. This might ring a bell to some French internet users, as Dr. Floyd is the webmaster of the Gamopat website and the immensely popular Gamopat forum.

He developed other games for the Atari ST as well in the early 90s. However, the ST version of this game was re-written from the ground up by Templeton of Cerebral Vortex fame. It is their second adaptation of a Dr. Floyd game for the Atari ST, with their first conversion being Crash Test Plumber, which by the way also finished first at a previous Silly Venture compo. While Cerebral Vortex created mostly games for the Atari Jaguar, they are also known for their ST and Falcon demos. They even made an intro screen for Atari Legend in the past.

Supa Zazai Da is an old school horizontal shooter ... with a story! It is clear that the creators ate one too many mushrooms when coming up with this stuff, and I love them for it. You play as Dr. Floyd. Mario and Sonic abducted your girlfriend Maria Whittaker! (Say whut?) So now it is up to you to rescue your natural 36DD breasted girlfriend while shooting your way through hordes of retro game characters.

Did this whet your appetite or what?

This is an old school game. So graphics are very simple. Not a problem, considering all the game characters come from the Atari 2600 and NES era. Graphics are nice, colorful and detailed, and it runs at a silky smooth 50 frames/sec without any noticeable slowdown. It really makes this game stand out actually. Boss characters give the game that extra spice.

Awesome. On the STe a sampled tune loops throughout the whole game. I love it, as it just pumps you up and makes the adrenaline flow. Sound effects are the usual 'peew peew' while shooting, Galaga style!
The Mega ST version features a cool in-game chriptune.

It doesn't get more straight forward than this. I have been complaining about the fact that there just aren't any 'pick up and play' games anymore these days. Well, I take it back, as Supa Zazai Da is THE solution to my problem. You move your ship up and down and back and forward and use the fire button to ... well ... shoot. All this while avoiding (way too many) enemies.

Supa Zazai Da features 8 levels and they are a lot of fun. Each level is based on a classic game. We have 'Galaga' level, 'Bubble Bobble' level, 'Zelda' level, 'Mario' level and so on. In each level, characters from these classic games are your enemy. As you can see from the screenshots, they are not low on ammo. You must avoid the big white dots. However, keep in mind that the actual hitbox is the green square on your shirt! So it is not all that bad! This takes some time to get used to as at first I thought the hit detection was off. But if the game wasn't made like this, it would be completely impossible I guess.

When you kill a baddie, it leaves little green particles behind. Grab those for extra points. Avoid the purple particles, as these will diminish your score.

At the end of each level there is a boss fight. Kill it and you go on to the next level. And that is all there is to it. There are no power ups.

Oh, and one final detail, you only have one life, and when you are hit, it is game over!

When I first got my hands on Supa Zazai Da, I must have played the first level about 20 times, not being able to complete it, always getting killed at the boss part. It frustrated the living crap out of me. The screens are literally filled to the brim with bullets and it seems there is just no way out. Why did the creator do this? That is not what is supposed to happen already during the first level, right? Wrong! Just as can be read in the manual, you have to hold on a little bit, do some practice and then the magic happens, you start seeing the patterns. All of a sudden you feel like Neo in The Matrix when he knows he IS the one :-) The game turns into one hell of a satisfying and addictive ride. It has been quite a while since I have experienced this.

That being said, Supa Zaza Dai is pretty unforgiving, with only one life and no power ups. But I understand why and it just makes the game more addictive. You want to see what happens in the next level so hey ... "let's give it another go!"

Sure this game is a blast on a real ST, but I played it in STEEM using my XBOX 360 controller and maybe it was not designed for this, but wow, it really plays like a dream! Controls are super responsive and the action is just fierce.

I just have one complaint. When you get the hang of it all, the game is way too short. I made it to the last level, the final rush (which did not seem to end) and I want more. More retro characters, more action packed levels, more crazy Dr. Floyd adventures, and way more, way way way more Maria Whittaker

Maybe one day they will release a data disk...