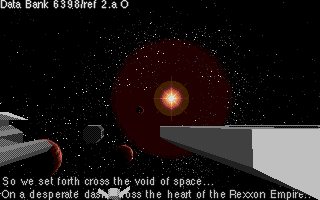 During the intro animations, we already get a taste of all the vector mayhem. 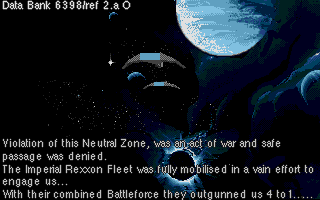 The mood is set by a haunting sample by 'Maniacs of Noise'. It works really well actually. 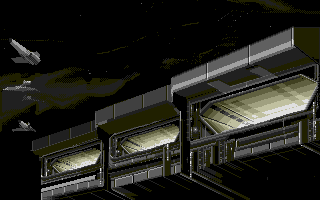 Up until here, the game is just fantastic. What an introduction, especially back when it was released! 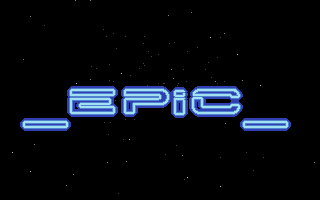 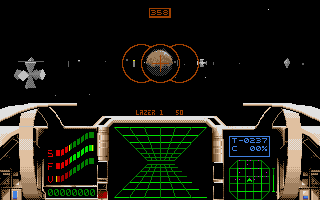 Epic has everything to be a great game. Fantastic graphics, a great game engine ... If only you knew what you had to do ... 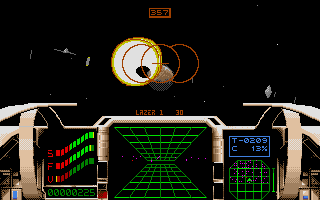 As a little kid I used to buy 2 different game magazines every single month. One of those was Dutch magazine 'Hoogspel', which I discovered at the age of 11. A year later, I started reading ‘ST Format’, which was quite a challenge as English wasn’t my native tongue. Why am I telling you this? Well, with the release of Epic, most magazines (especially the big UK ones) praised Digital Image Design for their technical marvel of a game, receiving mostly scores of 90% or more. However, this was not the case in my favorite Dutch magazine. The guys from ‘Hoogspel’ always had their own principles, only reviewing games that were actually available to the public, no previews or beta’s, and they really had a strong opinion (which eventually lead to their downfall 10 years after the magazine was born). I loved them for it. I will never forget their view on Epic, saying it was a beautiful game, but pretty empty gameplay wise. As a 12 year old, I never understood this view. Why was my favorite game magazine the only one on the planet that didn’t like this breathtaking space opera?

Space shooters are nothing new for me. I started with games like Star Raiders (which I loved) and Star Glider (I never had a clue what was going on but still loved it). Than I played Epic. And in the 90’s I was absolutely hooked on Lawrence Holland’s X-Wing and Tie Fighter games on my dad’s PC. In 1995, I also completed the fantastic Zero-5 on my precious STe. What a gem!

Epic took 3 years to complete, it was seriously hyped. I wasn't aware of this, taking my first steps in gaming journalism at the time (reading magazines). Now that I have gathered some serious experience points as a space pilot, how does this game compare to other games in the genre. Well time to revisit this game and give it proper look as an adult *huhum*. A while ago I got a hold of a complete boxed original copy, with manual, map and 3D glasses. So there is no stopping me now… (and oh boy, was I in for a treat!)

As a fan of classic computer games, you can only get excited when you boot the game and are immediately presented with a very special version of the OCEAN logo (not your typical blue and white design). This is a DID game after all. DID only released 2 other games on the ST (F29 Retaliator and Robocop 3), but they always had something special to me. Epic starts with a very elaborate cinematic, almost like watching the first bits of a Star Wars movie. Animation is quite good, there is the usual slow down, but everything looks very polished and stays playable. I’m a big fan of their first game, F29 Retaliator, and it is clear (especially when playing a mission on a planet) that Epic runs on a newer version of the same engine. The different camera angles and cockpit views are all very detailed and a joy to behold (not that you will use them, but still).

Again, the DID team has choosen digital music and soundeffects over the typical YM chiptunes. As the story unfolds during the intro, a short sample of an orchestration is played, which sounds kinda haunting. We are also treated with some very clean sampled speech now and then ("CLEAR FLIGHTDECK"

. During gameplay, there is not much going on apart from the usual dull sound effect when shooting the laser cannon. This is actually a bit of a let down.

So first of all, let me give you guys a little warning as this review is based on only 2 levels of gameplay. Why only 2 levels? That is indeed the question...

The game comes with a very thick manual, almost like a little novel. The complete back story is explained, mission briefings can be found in the manual as well (why they didn’t add these in the actual game is beyond me), all the spacecraft you encounter are explained in full detail...And more stuff like that which you don’t really need…

Epic is the first game that makes me feel genuinely stupid, as I just don’t have a clue what I need to do. I now have the original manual and still...nothing. This is problematic. For example, the first mission in space, you have to lead the way through a mine field, blow up enemy craft you encounter and finally destroy the primary target. The problem is … Where is the primary target? When you press the help button, the onboard computer gives you the coordinates (I guess), but when you follow them, nothing happens…for me at least.

To make matters worse, the programmers decided it would be a good idea to put in a time limit in every mission. Seriously? I mean, I understand why they did it. The missions are probably to short and when you finally figure out what to do you could end the game in 30 minutes. But this really is a frustrating way of making a game last longer for the player.

When I finally made it past mission one (and God knows how I pulled that off), I was amazed that in mission 2 the game turned almost in some kind of flight simulator. Just … EPIC! Yes, we have missions on different planets and this is really cool. But the same problem is still apparant. Where are the targets? What should I do? Reading the manual doesn’t help a single bit.

I wish I could write more about the other few features the game has to offer, like the different types of homing misiles, the onboard camera or the fact that you have a tractor beam to grab fuel pods (this is even possible in mission 1 according to the manual, but how and where?), but I just haven’t been able to use much of it. And yes, your ship also has a limited supply of fuel - which is yet again a time constraint.

Oh, and another thing that really bothered me (and maybe I’m just getting old), you need the ALT key to accelerate. But can you imagine using a joystick in one hand and the ALT key in the other? Almost uncontrollable, unless you have a sticky joystick. Playing with the mouse might be a good solution, and even though the controls are very responsive, it just feels weird. (and good luck with that Atari ST tank in you hand!).

I have played EPIC on the Amiga, and I have played it on the ST. I don’t see much of a difference, but I have 'wasted' quite a bit of time with this game and to be honest, it is a frustrating mess to me. Weird that I didn’t feel that way when I was younger, I was just amazed by the looks (but they do deceive!). I understand the view of my precious Hoogspel authors very well now. To me, Epic really is a missed opportunity. And believe me, I really want this game to be good. Maybe I was completely blinded by nostalgia. On a technically level, it is kinda amazing, especially considering it runs on a vanilla ST. The engine is good, the game mechanics are right, it is just not fun at all and I feel completely let down. I mean, a simple game of Star Raiders is way more satisfying. This would have been Ocean’s Wing Commander beater. Seriously? I don’t think so…And you know what the really funny thing is? I SO wanna experience more of this game, who knows which planets there are to visit? I could just use the cheat code which was added in the manual, but how boring is that?

(If you are reading this, you may always leave a comment to let me know what I’m doing wrong here, maybe you can turn me into an Epic fan after all …)

LynXX
Thanks for the review! Kind of sums up the experience I had at the time...

I remember the excitement about this game, finally able to get a hold of a copy at school (yep, sorry, I didn't pay for it!). If I recall correctly, it required an STe and didn't work on STf. I only had 1040 STf, but my best friend had an STe!

We were just crazy during the school day with the EPIC floppies in our backpack, just wanting for the school day to end so that we could go to his place and try the game! Finally the day ended, we jumped off the school bus and ran to his bedroom to play this unbelievable game!

What an intro, we're almost in a Star Wars movie, incredible! But then ...the game itself... What a let down indeed. I don't think we even ever got past the first level, as you said, it was completely confusing and unclear how to actually win the level and make progress.

Missed opportunity indeed. It's mostly a cool tech demo, where it could have been the killer app. the STe desperately needed...
November 18, 2017