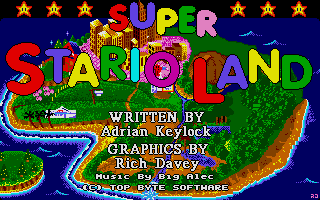 The very colorful intro screen. The music is top notch! 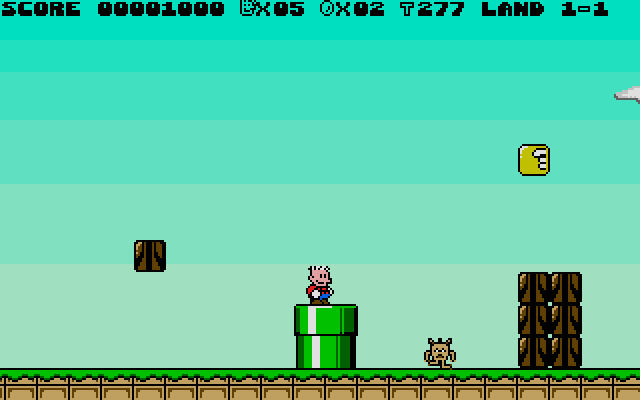 Hmmm, this seems so familiar. I have been here before, but hey ... what happened to my plumber's cap? 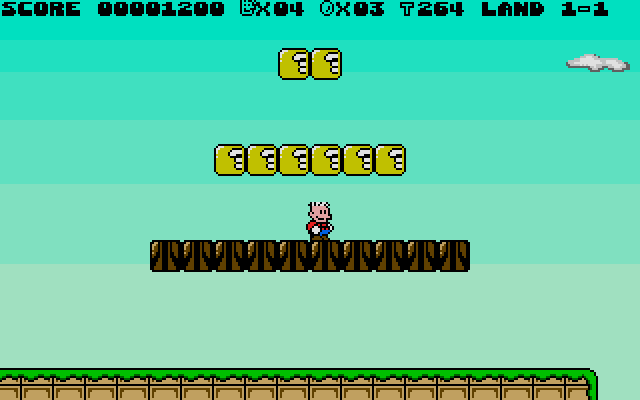 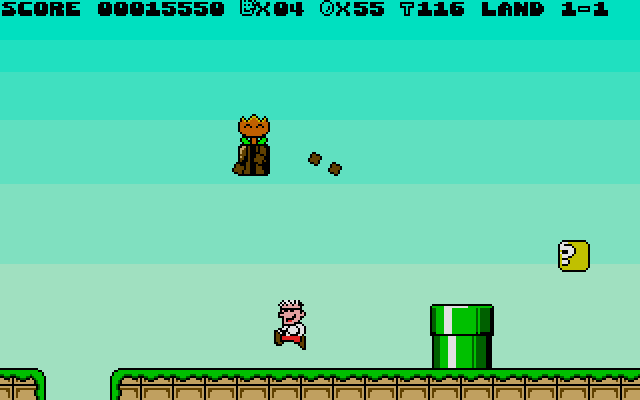 The flower bonus gives you the ability to shoot (NO SH*T SHERLOCK!). 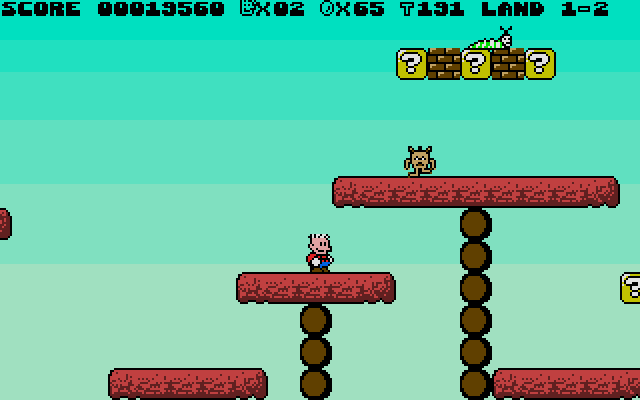 Level 2 and yes this screen is an exact copy of the Game Boy game :-) 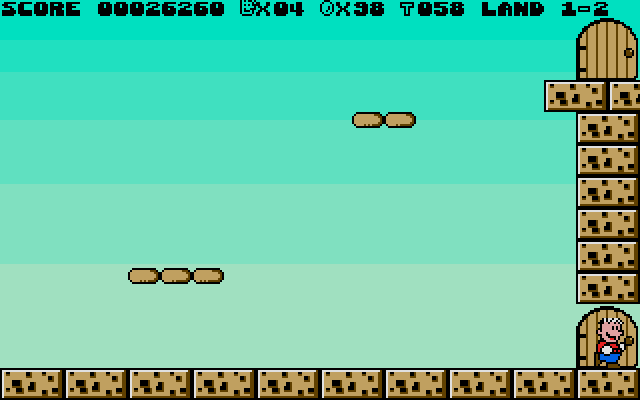 The end of level screen. Try taking the top door. 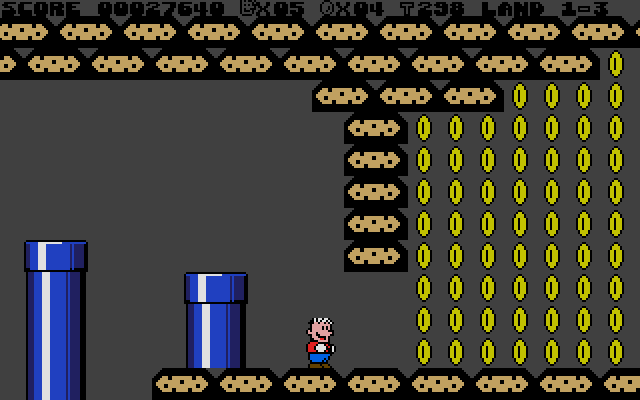 Look at all that treasure! Collect 100 coins for an extra life. 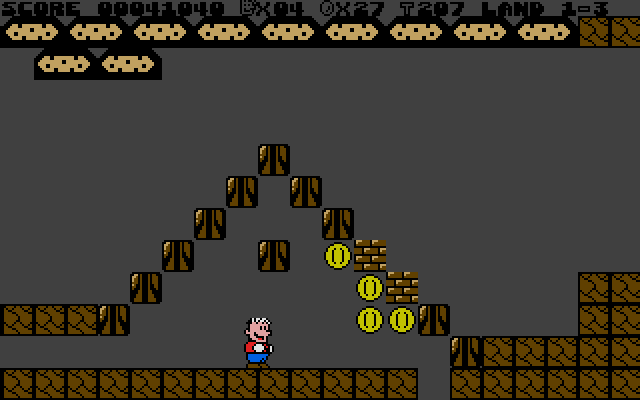 In the cave level the music gets more spooky... 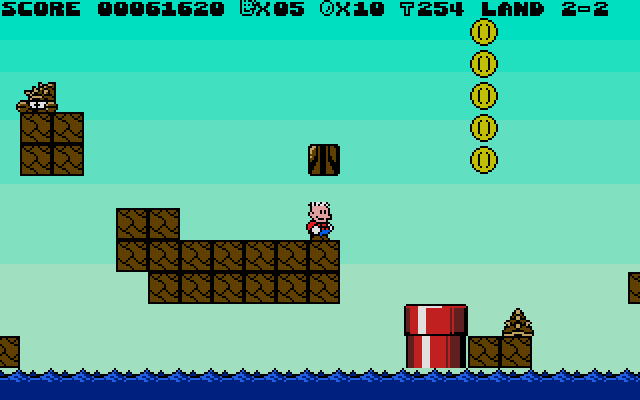 There really are some traps and deaths in this game. Practice is needed. 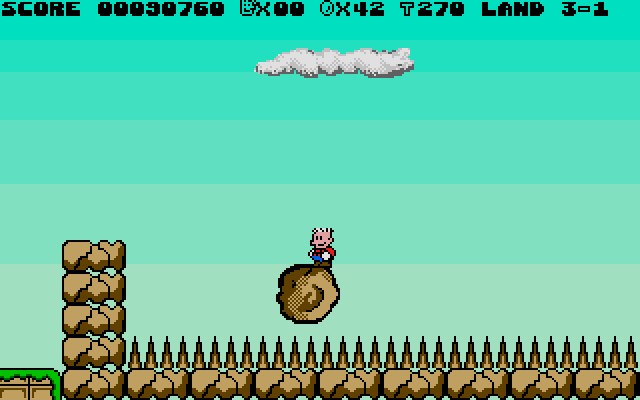 Another familiar sight from the classic Game Boy version 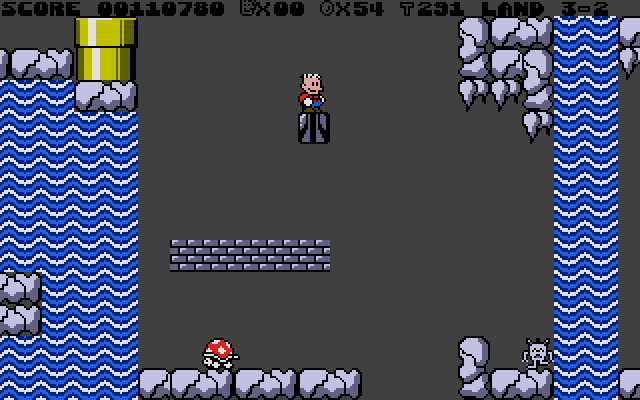 Ready to jump to the top of the screen? I guess we all know that secret by now...

During the second half of the 90s, with the complete demise of Atari, I moved my precious 1040 STe from my desk to the cupboard, and I became a PC gamer. In all, I think my Atari STe languished in the cupboard for about 3 years tops. Around 1999, when studying my first year of Computer Sciences, I got it out and put it back on my desk. At college, we had this big library filled with PCs, and after class, we went there to browse the internet. Back then we still used dial-up connection and spending time online was quite costly, so the school library was perfect. On one rainy evening I stumbled upon a very pretty website called 'The Little Green Desktop'. It's considered these days to be the mother of all ST sites, but I had no idea at the time. I loved it! Browsing through the games, using the forum to talk about ST games, leaving comments. It was all new to me and I soon rediscovered the most interesting homecomputer ever to grace this planet. I started using emulators (WinSTon!) and soon after, the ST was moved back from the cupboard and onto my desk.

Why am I telling you this? Well, the creator of the website that started it all again for me was Richard Davey. So you can imagine my surprise to see his name grace the screen when booting up this astonishing Mario clone. It seems that Mr Davey was also into ST game creation at one point in his life. More so, Top Byte (the company responsible for this game) had released quite a bit of amazing games during the final years of the ST's commercial lifespan. I guess that is also why they got away with a commercial release of Super Stario Land. Since the ST was going the way of the dodo, I think Nintendo didn't care anymore.

Ever since Nintendo released Mario Bros in 1985, every single console and homecomputer system needed to have their own mascot and Mario clone. On the ST, we already had The Great Giana Sisters. Super Stario Land however is even more true to the original. This game is based on the first mario game released on Nintendo's Game Boy, Super Mario Land. A lot of Mario fans disliked this game in the franchise, I however, loved every bit of it. I must have completed it a dozen times. I remember a girl from class back in 1992 bragging to me how she was able to complete this game (I never met any Game Boy owners who weren't able to complete SML). Everybody wanted to play this game, even people who didn't like video games. That was the strength of Nintendo (and that is why we have so many amazing game experts in the retro Nintendo scene these days *huhum*). Needles to say, I was excited when I saw the first glimps of this game in an issue of ST Format. I even recognized some of the level design just by looking at the shots.

With the commercial release of Stario, Davey had to change the look a little bit, compared to the ST Format preview that was released earlier on. The look of Stario was changed drastically, to minimize the resemblance of that famous Italian plumber, the bricks now displayed an Atari Fuji, and the enemy sprites were all replaced by random animals. Luckily, gameplay and overall level design remained untouched.

While some background graphics would have really added the extra punch, Super Stario Land just feels amazingly polished. Mostly due to the super slick scrolling (and oh boy what a difference it is after playing flip screen platformers like The Blues Brothers or Titus the Fox!). Super Stario Land plays like a dream on an Atari STe. The game is colorful enough, the sprites are nicely detailed, but most importantly, this just looks like a Mario game!

The game starts with a nicely enhanced intro tune. After that, at first glance, it seems we are treated with very few in game sound effects only. Is it just me, or do the sound effects ring a bell? I could swear some of them are ripped from the game Thundercats! They are nothing special, but they do the job. But wait, you are one button press away from pure sonic gold. If you press the F9 key, you switch to in-game music. The tracks by Big Alec are simply amazing and really show what can be done with that little YM chip. I love them all, from the catchy tunes of the first levels to the eerie cave theme. There is one real drawback. You can not have music and sound effects on simultaniously. Still, it's top notch stuff!

Since Super Stario Land plays exactly like a Mario game, explaining the gameplay would be kinda boring. Everything is there, the mushrooms are replaced by magic potions, you need to break bricks to collect coins and there is even a carrot bonus which can make Stario fly (sort of) by jumping up to 3 times.

More interesting however is the fact that the levels are randomly generated (or so I read). And it does look that way. The advantage is that you are never playing the exact same game. Enemies are never put on the same spot and platforming is always a bit different. The drawback however is the actual level design. Because of this generated world, the levels sometimes feel a bit ... boring ... especially compared to the original. It feels as if certain screens apear in the same level up to 3 times. It is not all that bad, I just miss a bit of punch from time to time (Oh, not this jump, AGAIN!).

As mentioned above, the scrolling is just perfect and the controls are spot on. If you ever played the game on the Game Boy, well, you don't really need to get used to anything, it is that well made! Stario does suffer from the typical sliding effect and because the level design is just more difficult than the original, with a lot more pits and cliffs to fall to your death, this little handicap really gets frustrating from time to time, but I guess that just needs to be part of the game.

The famous pipes from the original are here as well. Sadly though, I did not find a single one which led me to a hidden bonus room or similar as in the original game. So I guess they are just there for show. Most of the baddies are easy to kill by jumping on them ... but don't get me started on those damn flying fish that you will encounter later on in the game. These are just a pain in the b*tt. Practice makes perfect. I also did not encounter a boss during my time playing this game.

If you are a Super Mario Land fan but think the original is a bit too easy and aren't afraid of a challenge, than you are in for a treat with this game. Super Stario Land truely is a hidden gem on the Atari ST. Technically, this game is just perfect, level design could use a little bit work. But don't let this hold you back.

Getting older, not only my hair is growing thinner, but also my patience for these kinds of games. Super Stario Land sometimes is a bit too frustrating for a guy like me. I prefer the original, because it is more forgiving. That being said, Super Stario Land really is a good game and definitely one of the better platformers on the Atari ST.

mwaawm
This game was an utterly amazing release in the STs twilight years.....proper scrolling that should have been incorporated into all ST games back in the day.
February 22, 2021