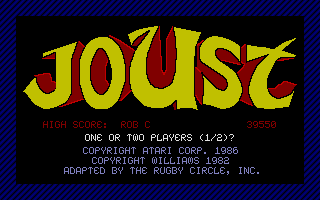 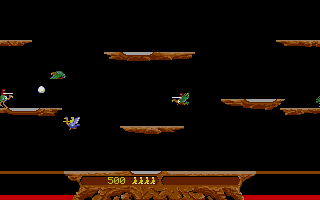 You've just beaten a red Bounder. Make sure to catch that egg before it hatches! 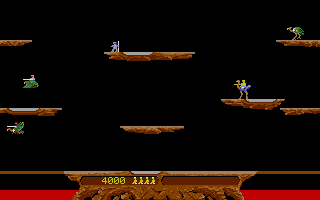 A Bounder just hatched and turned into a more powerful Hunter ... Go get the b*stard! 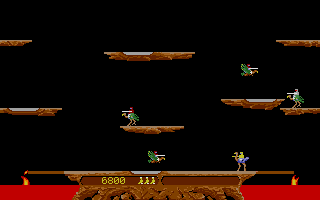 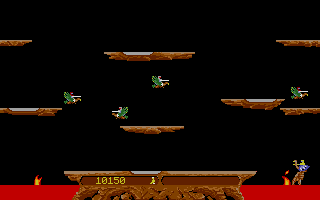 The lava troll has got you in his grip. Try to wiggle your way out of it or you'll be burned to pulp... 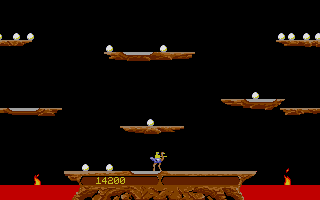 The egg wave. Catch them all before they hatch! 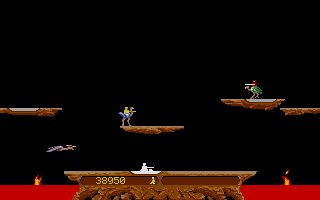 The fearsome Pterodactyl. Watch out for this guy... 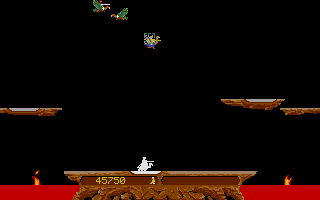 Almost all platforms are gone. Now the enemy can attack from everywhere! 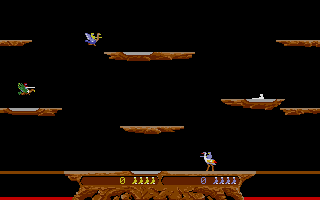 
Every games fan in his 20's must have probably played this classic "ostrich battling" game. Originally developed in 1982 by Williams for the arcade market, it has now found its place on almost every home system available. And the Atari ST version, which dates back from 1986, might even be considered the best version yet! "Joust" is known to be one of the greatest 2 player games ever created, and I used to play this title a lot with friends back in them days. Let's give this classic a closer look ...

Graphics are good, considering that it is an exact arcade conversion. "Joust" has never been a graphically advanced game, and to produce the things you see on screen, your ST doesn't even sweat! Yet still, graphics are colorful and animation is very fluently. The movement of the giant birds looks very good. This is the best version of the game I've seen...

The music is none-existent. There is a very short intro sample and some in-game sound effects. They are used very sparse, fortunately, cause they sound mighty annoying. The constant ticking of the footsteps when your bird is walking ... It makes you turn of the sound completely!

In "Joust" you are a lone warrior in an alien world, which is infested with buzzard mounted enemies. To protect yourself from these creatures, you are mounted yourself on a giant ostrich and, of course, you have your lance at your disposal. Now it is your job to defeat all enemy knights in a joust. Once you have accomplished this task, you move on to the next wave. In total there are 99 waves for you to finish!


There are 3 types of enemy knights, they can be distinguished by color. First we have the red Bounders, these are the most common and easiest in the series. Secondly, there are the more sneaky, silver colored hunters. Watch out as they change their course all of a sudden to trick you. Finally, the dark blue colored shadow lords are the toughest. They fly like a lunatic, so beware. Apart from these knights, the "unbeatable?" Pterodactyl might appear sometimes. He can only be destroyed by hitting him straight in the beak!


How can you defeat the enemy, you ask? Well, once you engage in a fight, the warrior that hits the highest, wins. In other words, try and jump on them! Once defeated, the enemy buzzard leaves an egg behind. You have to try and get this one for extra points. If you wait long enough, the egg hatches and a warrior of a higher order is generated. you can still grab him for extra points. If this guy is picked up by a buzzard, you'll have to start over and fight him again...


There are also 2 extra bonus rounds after every 3 waves or so. One is the egg wave, in which you have to grab all eggs on screen before they hatch. The other one is the Pterodactyl wave. Here you'll have to watch out for that flying dinosaur. After a few waves, platforms start to disintegrate, making it even harder as you can't take cover anymore. Also watch out for the lava pool and the lava troll at the bottom. He tries to grab you and pull you under. You can overcome has grip by flapping your wings as hard as you can!


In one player mode, "Joust" can get boring pretty fast, as there isn't much variation in the game. 2 player mode, on the other hand, is something completely different. In this mode you work as a team. There are also extra bonus rounds implemented. One in which both of you have to survive during the whole round to receive extra points. And another one where you, strangely enough, have to try and defeat your partner!

What makes "Joust" such a nice experience is the ease of the gameplay. You are gonna be airborne before you know it, kicking some serious buzzard butt. It can get, however, pretty boring in 1 player mode. And 99 waves is a lot of the same to complete. 2 player mode on the other hand is just amazing, one of the better experiences I had on my ST. Give this classic a try. It is a really original game!