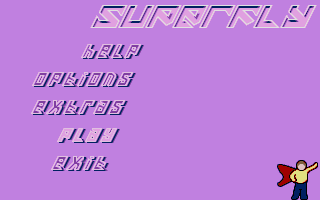 The menu screen - Simple but beautiful. 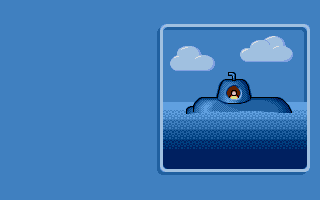 This is a picture from the gallery section of the game! 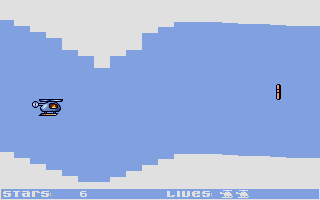 On to the next level! Do I hear the theme from Airwolf? :-) 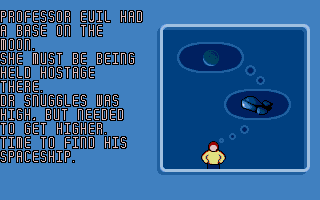 One of the many cutscenes in the story mode. The finishing touch in this game... 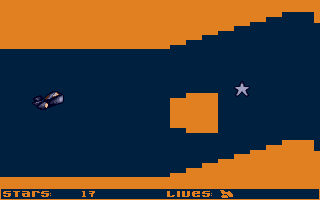 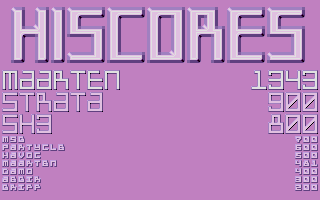 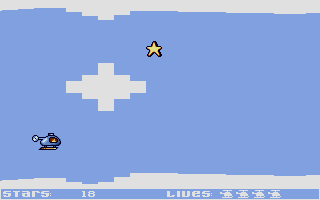 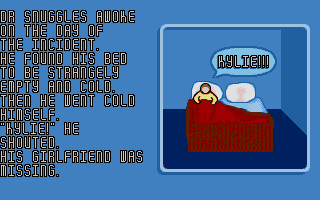 The story is so stupid, it starts to sound hilarious. I think the creators did this on purpose...

It seems to me that the best game creators and all-round coders are the people from the Demo scene. They really know what the ST is about, they know what it can do, and they always seem to push the hardware to the limit. Too bad there are so few demo coders moving over to the game scene. But the ones who did, have proven themselves they can do more then "just" the ordinary scrolling routine. Take the guys from Synergy for example. They created a Pacman clone called "Crapman", and even though the title sounds weird, for the game itself the complete opposite is true. It's the best Pacman game ever. Or what about the people from X-troll? Some of them went on to create the fantastic "Lethal Xcess". Sadly enough, we don't hear a lot of them these days when it comes to games...


But there is one team that seems to be creating one game after the other. They're called "Reservoir Gods" and they just released this little stunner "Superfly". And this shows that a game doesn't need to be complex to be good. Just think of games like "Tetris" or "Pacman". "Superfly" is so simple, yet very addictive. To some it might sound a bit over the top to compare this game with the previously mentioned two cash cows, yet I think this is not too far fetched after all !!

The graphics might look a bit dull at first, but you just have to see this game in action. Everything scrolls at a whopping 60 frames/sec. The worlds are very simply drawn, with no real background graphics, still everything looks quite slick. The creators had the option of making a fully graphically enhanced version, which only STe and Falcon machines would be able to run, or the version you see now, for every ST machine out there.


Keep in mind that the SID music and the 60 frames scrolling eat up a lot of resources, so a more advanced version would have never been possible on "ordinary" ST machines. So now, the background and obstacles are dynamically rendered and build by the CPU, making the game different every time you play it. As a whole package this is still all top notch work. Not the best, but far from the worst - and the 8-bit look is quite cool!

The music is sublime. I can easily say that these are just the best Yamaha tunes I have ever heard on my STe. Remember, these are not MOD files. I didn't even know the Yamaha chip was capable of producing such rocking tunes! They used the so called SID technology, like on the Commodore 64, (developed by Jochen Hippel for the ST, if I'm not mistaken) and it shows. Why other game developers never used this in the past is a mystery to me.

Where do I start. For such a simple game, the creators have really outdone themselves to make it as fresh and different each time you play it. Let me first try to explain the basic gameplay a bit more.


"Superfly" is a side-scrolling game, but not a shooter. It's simple, just manoeuvre your craft between the upper and lower barrier and avoid the obstacles on the way. Keep in mind that the real trick in this game is gravity. Your craft is pulled to the bottom of the screen, yet you have to try and keep it balanced between the edges!


To play the game, you only need to press one button, the space bar. Yes, you heard me, ONE button! The craft flies all by itself, by pressing space, you make it go up. This is the first game I ever played that can be completed by pressing just 1 button. Now that is what I call simplicity, and it really works, I can assure you. This is just a big plus in my book!


So how do they manage to keep the game from getting boring quickly? Well, there are a lot of different game modes. You have the "Freeflight" mode, in which you can practice a bit, get used to the controls, and try and reach as far in a level as possible. In "Star Search" mode you'll have to collect a given number of stars scattered around each level. Then there is the "Stage" mode. In this mode you'll have to fly a defined distance to make it to the next level. "Hunter" mode will have you hunting after even more stars. And finally we have the "Story" mode, and this is what the game is all about!


The story to the game is a bit dull, but it is not really important, it only adds a lot to the gameplay. One day, you wake up just to find out your girlfriend has been kidnapped by Captain Evil. So it is your job to get her back and defeat the Evil captain once and for all. So story mode is the more straight forward game.


You get 4 lives and you'll have to try and win round after round to end up in a final confrontation with Captain Evil! All the different game modes are mixed together in one fun, action packed adventure! There are 5 main worlds and bucket loads of levels to complete. In each world, you'll find yourself in a different kind of craft, with its own ways of flying.


When you first start the game, you'll notice that most of the game's features are locked. The only thing you can do is start the game in "Freeflight" mode. And this is where we reach another highly original factor in the game. To open up all the other features, you'll have to earn experience points. How can you earn experience points, you ask. By playing of course. And it doesn't matter how you play, even if you suck at it, you get points. And you'll learn and get better at the same time. I find this just amazing, and it had me playing over and over, just to see what other features were in store!


So in other words, you can never really get stuck in this game! And all your scores and stats are saved, so you never have to completely start over when you load it up the next time. But there is even more. If you manage to score enough points, there is a feature to play the stage a completely different way! I haven't unlocked it yet, so I really wonder what it'll be. On a side note, the creators have added some more multimedia. There is a "Gallery" hidden in the option screen. Each time you completely fill a highscore table (10 entries) in a certain game mode, a picture is released for your viewing pleasure. These are most of the time production art or never used pictures for the game!


To round it up, there is even a jukebox where you can select each song used in the game! And of course, there are a lot of video and sound options. Wanna change the refresh rate and play in 60 hz? No problem (remember, we're talking demo coders here!). Support for the Jaguar gamepad? It's here too. You'll be toying quite awhile with all the features before you actually start your quest!

"Superfly" is an amazing little product. It's simple, it looks great, it plays great and it is addictive as hell. You'll be giving it another go each time you want to turn of your machine :-)


I've been playing it the whole weekend, and it has been awhile since I've been hooked like this on a game. This is a hard drug for every arcade fan! A real recommendation! The Gods have done it again - you can be sure of that! My personal favorite of the year!!!