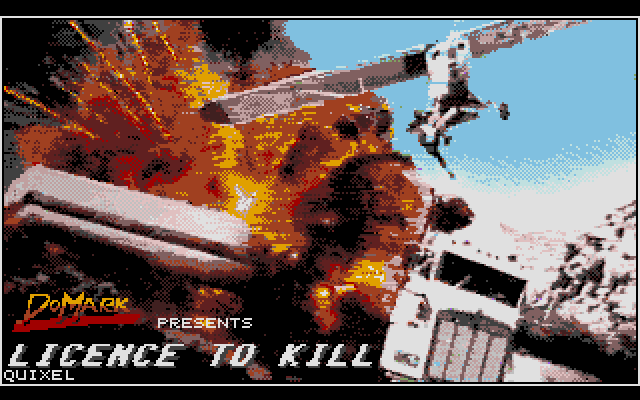 One of the many amazing scenes from the movie. Although this scan looks pretty bad... 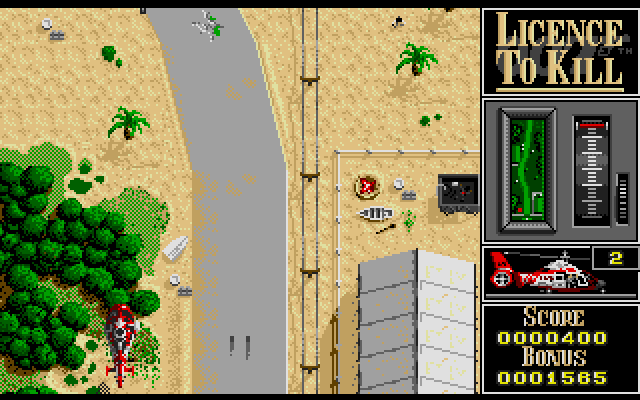 Now you better watch those power lines if you plan on being 'Airwolf'! The sound of the chopper is so cool. 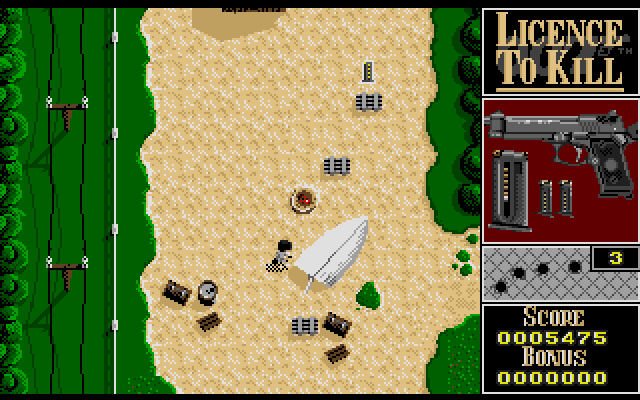 Making those crates explode is a satifying way to finish off a bad guy. 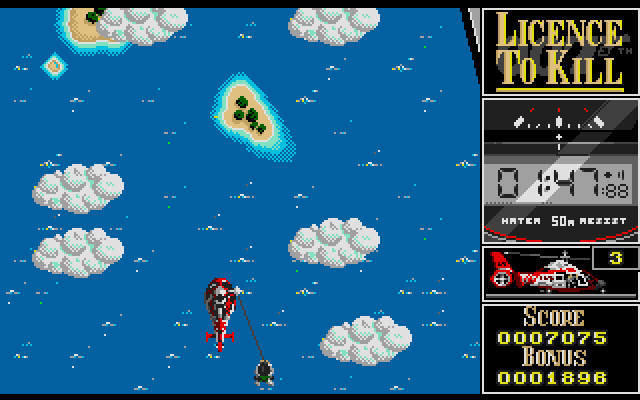 I never knew hanging from a chopper could be this boring. 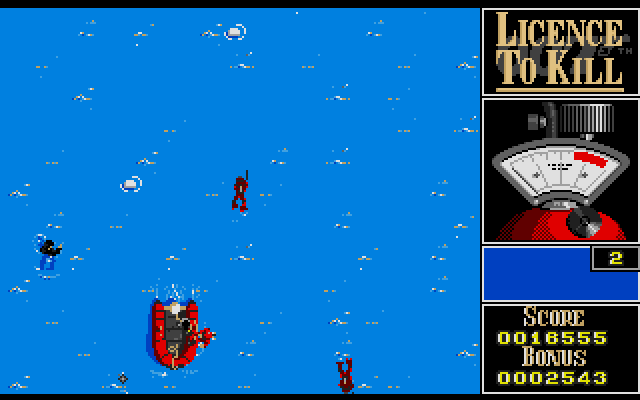 Bullets, boats, harpoons, divers ... will it ever be enough? 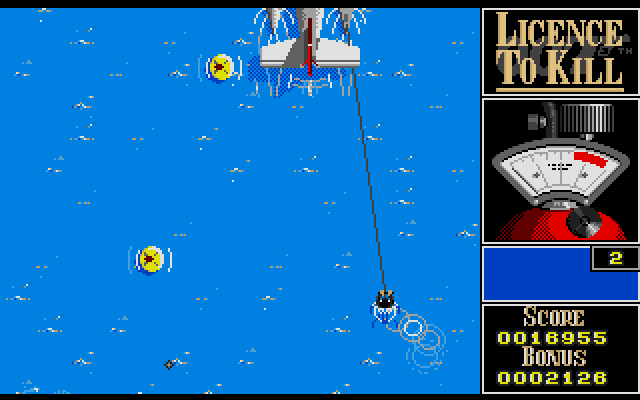 Who's in for some barefoot waterskiing? 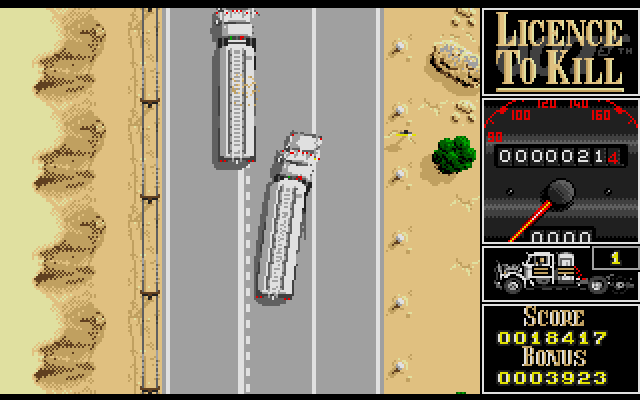 Push those tankers to the side and make them explode. This is Spyhunter with balls! 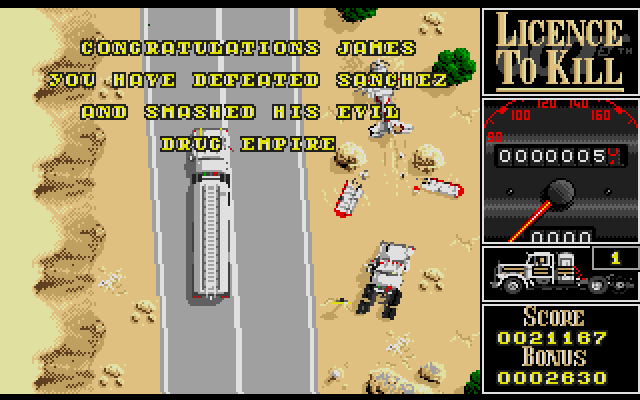 1989 was the year I saw my first Bond movie at the cinema. I went with a friend, my nephew (who still is a major Bond fan to this day) and ... my mom. I was 9 years old, so I guess that's normal. The hype that went on prior to the movie being released was just incredible. MTV must have played the Gladys Knight video every single hour of the day. Why my ears never started to bleed is beyond me. But the video itself...man oh man...It contained the best parts of the movie. The 18 wheeler chases were simply mind-boggling, certainly for a kid of my age. I watched the video clip over and over...
In the end, we left the cinema completely satisfied and in love with the beautiful Bond girls (albeit slightly traumatized by the 'exploding head in the pressure cabin' scene). Even today I find myself enjoying this Bond movie. Timothy Dalton is one of my favourites and the stunts in Licence to Kill are just the coolest. Such a fun movie...

A game was, of course, bound to happen, and that same year it was ]Domark who jumped the hype train and released it for the home computer market. Prior to this title they already released Live and Let Die, a mediocre Fire & Forget game on water. So could they do a better job this time around? Oddly enough, a year later The Spy Who Loved Me hit the shelves. And even though they had the release order all wrong, that last game I really loved. So let's see if Licence to Kill fares well in comparison ...

This game looks pretty nice. It is nothing special, but for a 1989 game, it is well done. The first levels are top down shooters, first from the sky and later on land. When comparing this to other titles on the ST like Ikari Warriors or Leatherneck, Licence to Kill is definitely the nicest. There is some slowdown on some of the levels when a lot of action is happening on screen, and this can get a bit in the way, but nothing too distracting.

The chiptunes by David Whittaker are really nothing special in my book. Even though I'm a fan of the man, this game features a very mediocre version of the Bond theme. But there are some really nice sound effects present. Just listen to the chopper in the first level. It sounds so real. I love that.

Licence to Kill features 6 scenes from the movie (or 5, depending how you look at it). Once you finish these with the 3 lives at your disposal, you complete the adventure and are treated with a sad little text screen before the game starts over. But OK, let's not get ahead of ourselves here. The gamescreen is always divided into 2 parts. The bigger half has the playfield and on the right your score and other information, which changes depending on the level you are playing.

In the first scene you are flying a chopper. This time around we are treated with a beautiful looking version of Chopper X. On the right side we see a little map and an altitude meter. It is your job to reach your destination, shooting down the enemy turrets, without crashing. However, there is a little catch, when you want to go fast, your chopper will fly low and you can collide with obstacles like buildings and even power lines. On the map you see a blinking dot, this represents your target. Once you catch up with it, the scene is completed. This first level is fun, but way too easy and too short.

The second scene is your first ground mission. As mentioned before, the game is turned in a more tactical version of Commando. I absolutely love this level and I think it is the best one of the game. This is not just running and gunning. The difference is that you have to aim carefully first, place your crosshair in the right direction and make sure you are positioned behind one of the many obstacles to avoid incoming bullets. This time your ammo is displayed on the right side of the screen. When you kill an enemy, you will sometimes receive extra ammo. One word of warning, make sure to reload at the right moment. Because, if this happens during action, there is a good chance you are treated with the Game Over screen. You can be hit 5 times before losing a life.

Scene 3 is where the game is starting to become a bit hit or miss. You see, in this level it is your job to drop Bond from the chopper onto a plane, like in the movie. You have to catch up with the plane and carefully fly right above its tail. When this is done, a marker appears and you can drop the main hero. All this must be done within the 2 minute mark. My main problem here is that it took me a lot of tries before I figured out it had to be the tail of the plane (maybe I did not pay enough attention watching the movie). All in all, I think this level is boring compared to what we experienced up until this point. Moving along ...

Scene 4 is the swimming/diving level. On the right you now have an oxygen meter. You have to avoid the speedboats, bullets and other divers with harpoons. When you dive, the speedboats won't see you and will not fire, but you can run out of oxygen quickly. In this mode you have to watch out for other divers and try to grab a harpoon from an enemy. From time to time a plane will appear on top of the screen. When this happens, it is your job to aim your harpoon at one of the pontoons. If you manage to do this, you will move straight into Scene 5. You are now waterskiing behind the plane and need to try and climb on to it, while avoiding rocks and other objects. All in all, pretty fun.

The 6th and final scene has you flying in a plane. You are back in the scenery of level one (which is a bit of a bummer). This time you are chasing a truck, position the plane exactly at the front of it and drop Bond so he can hijack the 18 wheeler. This part has completely the same mechanic as the one in scene 3. Once you are in the truck, you need to destroy every tanker you encounter by hitting them. On the right we see a time limit and a picture of your truck displaying the damage you have suffered. This final level is again way too easy. I noticed that driving on the left side of the road is the way to go, as the enemy will never hit you with their rocket launchers!

Licence to Kill really is a mixed bag. Although the game looks pretty classy, I feel with a bit more TLC they could have created a winner. The shooting level is really good, and will have you playing for a while. After this one, the game becomes more frustrating, and a lot of times, because you don't know what to do. IMO, the manual is needed to complete the game, and that is what I did.

Domark used the same formula again a year later on The Spy Who loved Me. This game features even better graphics and the gameplay, of the levels I experienced, is absolutely top notch. That being said, I do recommend Licence to Kill. It is one of those titles I have been playing my whole life, and something I revisit from time to time.

AtariCrypt
yeah this does look nice and sure it also looks like a bit of TLC would have been nice, i agree. I'll have to play this!
August 17, 2018