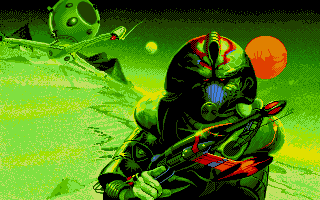 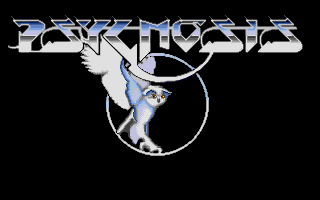 Psygnosis went on to create classics like Shadow of the Beast and The Killing Game Show. 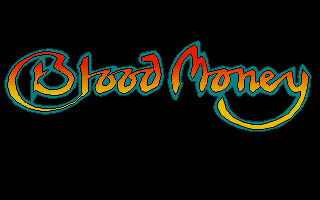 The speech blew me away as a kid coming from the ZX Spectrum. 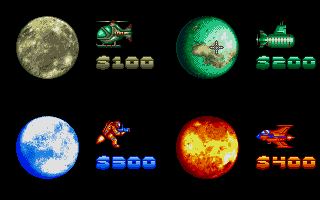 The 4 levels of the game. Only 2 are available at start. 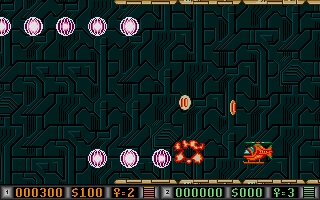 The coins drop off screen. So be quick and grab as many as you can. 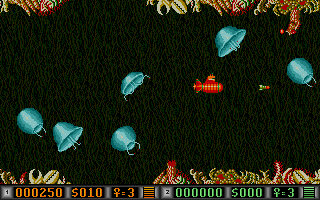 In the second world you are in a submarine.

Blood Money is a 4 way scrolling shoot’em up developed by DMA Design and published by Psygnosis in 1989. DMA Design went on to make lots of high quality AAA games such as the Grand Theft Auto and Red Dead Redemption series.

Psygnosis have been involved in some amazing classic titles like Shadow of the Beast, The Killing Game Show, Leander and many others. It's fair to say both are legendary for all kinds of games on a lot of formats.

Blood Money is one of the earliest titles on the Atari ST, but it's also available for the Commodore 64 and Commodore Amiga. Not counting the ST, I would pick the Commodore 64 version to be better than the Amiga because the music is amazing and it's just a better experience.

The sound in this game is superb and, in my unpopular opinion, it's better than the Amiga version. I find the music on the Amiga a bit over the top and doesn't really create any kind of atmosphere, but with the ST port it makes you feel that you are on your own within the large levels. You can turn the music on or off and just have the sound effects, which do the job nicely.

You will notice in the starting menu that you can have the standard 1 player game or a co-op 2 player game. It really does make for a fun experience no matter what mode you select.

Once you start the game you can select from 4 worlds, which is all a con, because you can't pick 2 of the worlds just yet. No, you have to get enough money to buy the craft for that world. If you are new to this game then I would just pick the first world with the chopper because the others will chew you up in double time (more on that later). What’s nice is that if you do manage to beat level 1, all your power-ups are carried over to the next world.

The main aim of the game is to destroy everything you come across and pick up the money that's left. It all falls down and off the screen, so you must be quick in collecting that cash because you are going to need it. That's when the shops will appear on the levels and you can upgrade your craft. From multi directional firing, to improving the length and power of your shots, you are going to need them all. I did find one certain enemy a pain because if it collides with you, it doesn't die but it will take your money away.

If there is one downside to this game it's the difficulty, because believe me, you won't get off the first world for a while. You are going to need to play this game for some time and remember the patterns that the enemy comes at you. If you don’t, then the screen will become overrun and your energy bar crashes to nothing very quickly.

Blood Money is where I cut my teeth on the Atari ST. I had not seen this wonderful computer in action before and I didn't have the money to even buy one. So it was lucky that my aunt's boyfriend at the time had the 520STE along with some games and that it was all in my grandparents.

The intro where it speaks really blew me away when I was a kid and still does now. I still had my ZX Spectrum, so some of this was all new to me (yes, I had a sheltered life).

My final thoughts on this game is that it's a very good shoot-em-up, but also very difficult if you are new to it. I think to get anything out of it you will need a lot of time to learn a lot to even get off the first world, let alone any of the others.

I still like this game even though I am super crap at it as you will see in the video.

MichaelB
I loved Blood Money when I first played it.... I was terrible at it though and quickly lost interest but the digitised speech at the beginning still gives me goosebumps....
May 30, 2021