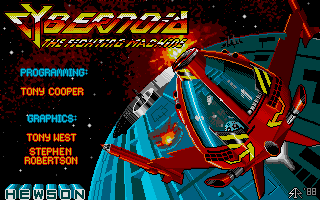 The fantastic loading screen of your ship...in all its 16 bit glory. 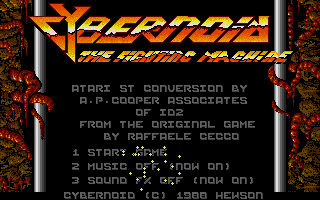 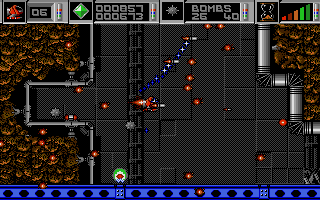 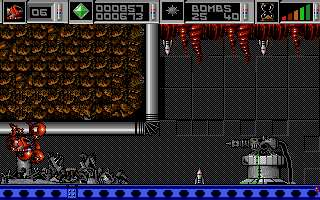 This screen is a lot easier to get around unlike the 8bit ports. 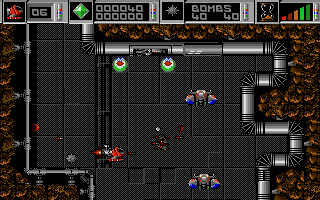 A higher resolution makes the game so much better.

So the classic 8-bit Cybernoid is on the 16bit home computers and I have been hearing some horrible things about it. Is it as bad as people say? Or is it a case of the public rather the 8-bit version even though the 16-bit ports are better? Let's find out…

I remember many a night on my ZX Spectrum playing Cybernoid and its sequel for hours on end. It was a hard and frustrating experience as you had to be pixel perfect to get past screen after screen. It seemed very closed in and one wrong move resulted in you dying over and over. I still liked the game, but I felt there were a lot of problems with it.

Now this is the first time I have even touched one of the 16-bit ports and, just for reference, I even had a go at the Amiga version just to compare. I think I know where this “8-bit version is better than the 16-bit version is coming from”.

Here you can select to toggle the sound effects and even the music, but you can have both running at the same time which is always welcome. With a press of the fire button you are away blasting everything in your sight.

The backgrounds, although not very detailed, still gives off that you are in a complex and there is only one way out. You even see what lurks within the environment and what holds the platforms up too.

This game is flip screen so once you get on to a new screen you have to scan quickly and try to neutralize the bigger threat before it finishes you off. Lucky for us we have a host of weapons onboard our ship. From normal missiles, shields, mines, heat seeking missiles and bouncing bombs, these are selected from the function keys 1 to 5. Your gun can take out the smaller ships and aliens that fly at you and sometimes they will leave power ups and gems. By the way, the aim of the game is to get through the whole level whilst collecting as many gems as possible. Even if you don't collect enough, you still proceed to the next area.

In terms of power ups you can get a rear shot to take out anything that's behind you. You can also collect 3 shield balls that circle around your ship destroying most things that they collide with.

So as I said earlier, I think I know why this game gets a bad rap and its down to the Amiga version. There is no music at all in the game and I have tried a lot of cracked and original disk versions. I also noticed the sound effects really lack in every department and it's like if they couldn't be arsed with it. On the Atari ST, it's a different story and I would recommend this game to anyone who like shooters and want a challenge.

What I like about this game is that the graphics are smaller and it's not cramped and claustrophobic. The big guns that fire at you (one is on screen 3 of the first level) are not randomly firing 3 to 4 times in a matter of seconds either. It just seems to be a lot more balanced on the player, be it if they are NOOB or an expert. Hell, I even completed the first level on the Atari ST which I have never done with any of the 8-bit ports.

All in all its a better game than the 8-bit effort if you are playing the ST version.

Check out the game in action on my YouTube page.