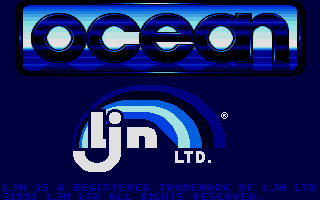 Ah Ocean ... If the games they produced were as good as their movie counterparts, we would be living in a better world :-) 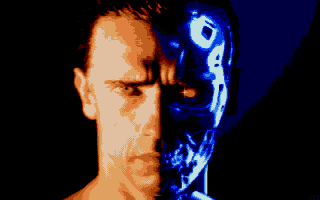 Machine, meat and blood in an intimate relationship! (inflames) 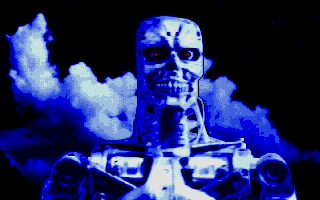 The scrolling intro picture is so cool! 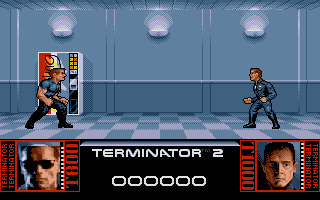 The first level. The fight against the T1000 at the Galeria! 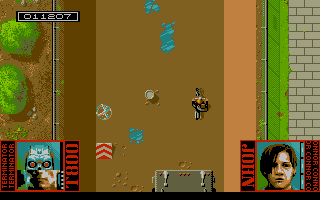 Level 2 : The motor cycle ride through the sewer. The game transforms into a fast paced Major Motion clone! 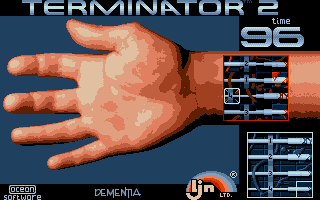 The first puzzle level. Manage to solve this, and your health is restored to the fullest! 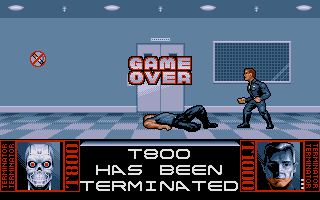 The fight at the mental institution. Hey, that's not the way it is supposed to be! 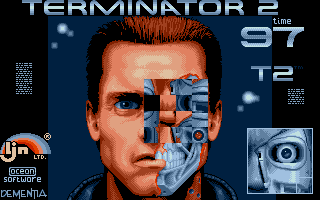 And yet another puzzle level. Try and restore Schwarzie's vision! 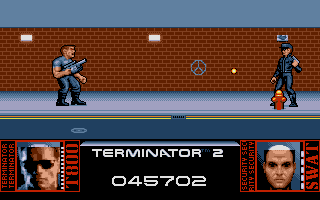 The run and shoot type of level. I really love the depiction of the energy meters at the bottom. There was a time lots of games had these. Where did we see it also ... Ah yes, Rambo 3 for example! 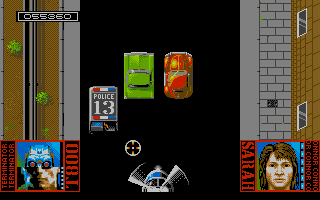 The helicopter chase level. Avoid the traffic, see to it that Sarah doesn't get hit, and bring down that chopper!! Pfeww... 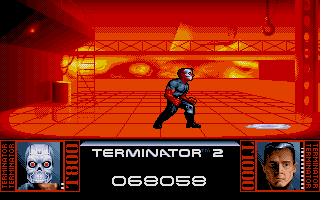 The final confrontation ... It seems our T1000 has a little heating problems ... Cool down man!

Lately, I've been in a real Terminator mood. Now that the trailers of the coming "Terminator 3 : Rise of the machines" are popping up all over the net. I'm a very big fan of the previous movies, but I have to admit, I lost hope for this one being a good movie after seeing the latest trailer. But it wouldn't be fair to judge a film by just the teasers, so let's just wait and see!


Anyway, about 12 years ago, around the same time of the year, most of us were all anxiously awaiting "Judgement Day" (and than I'm talking about the second movie of course). The first rumors of a computer game were also surfacing, and since this was a big film license, the game would be released by Ocean (or what did you expect). Hopes were getting very high indeed ...

Before playing the Atari ST version, I had seen the PC version at my friends. I was impressed by the graphics back then. Especially the digitized movie cut scenes in between levels were just cool. And I was a bit afraid if the ST could handle all this (what did I know of hardware back then). Until the day arrived and I received a copy for my precious ST. I popped in the discs and after some loading time ... My jaw dropped to the floor just by seeing the digitized scrolling screen of the T800 endoskeleton. Never before was I so proud to be an ST owner ... This was something none of my friends had ...


Even now, after 12 years, I still think it all looks cool. The in-game graphics are nice and colorful. Animation is good. The cut scenes look great. These aren't the best graphics seen in an ST game (even at the time), but again, it was a nice looker by Ocean. NO PROBLEMO here!

Well, the sound isn't really special. When the game starts, we hear the YM chip version of the Terminator theme. One word ... awful. It sounds amazingly bad. Throughout the game we're offered the usual sound effects...Screams and moans during fights, gun shots in the action parts of the game. We have heard worse on the ST, but it all could have been better. (It still beats the PC speaker of those days)

We all know the story by now, I guess. The year is 1991. John Conner's (the leader of the human resistance in the future) life is endangered by the arrival of a new type of Terminator, the T1000. This guy has come straight from the future. At first it seems John doesn't stand a chance of survival. But John is a smart little boy. In the fight against the machines (in the future, that is) he has captured a Terminator, and has sent that one also back to 1991, to protect him against the evil T1000. Are you still with me?


The game follows the movie somewhat. There is no real story though, but every level depicts a scene from the film. We start with a fight at the Galeria, and we end with the final showdown at the steel mil. In the game you play as the T800 Terminator (Schwarzenegger) and it is your job to protect John and thus save mankind. You have to do this throughout a number of levels. If you manage to save John in each of them, and not get killed yourself, you win!


This complete game is a combination of different game types. There are fighting sequences where you'll have to beat the T1000. In these scenes you can not only fight with you bare hands, but you can also use your gun. Beware, you have a limited number of bullets. Then there are driving sequences. Here the game is turned into a top-down racer. We have the typical run & shoot sequences, like we're used to see from Ocean. And finally, there are also two puzzle levels.


You only have 1 life in this game. When your energy bar is drained, you die and the game is over. And also keep in mind that this health meter is not restored between levels. So you'll have to practice quite a bit to complete this game. However, if you manage to solve the puzzle levels (or partly solve them) you can win back some of your precious energy.


This is done on purpose! Because this game is just too short. It only features 8 levels, and 3 of them are fights against the T1000. Even though the levels are fun to play, it gets boring quickly. The gameplay itself isn't bad, and the controls are also pretty straight forward. But it is a bit sad, this could have been so much more ...

"Terminator 2 : Judgment Day" is another typical Ocean game, lots of eye candy, but little gameplay! It is clear that this was again a quick game to cash in on the success of the movie! Don't get me wrong, it is fun at first, but it won't last long. In the end, this will be something only remembered by the T2 fans among us...Hastalavista, baby!!!

Now if Acclaim had only released the fantastic "T2 : The arcade game" for the ST ...