Spy Who Loved Me, The

Spy Who Loved Me, The 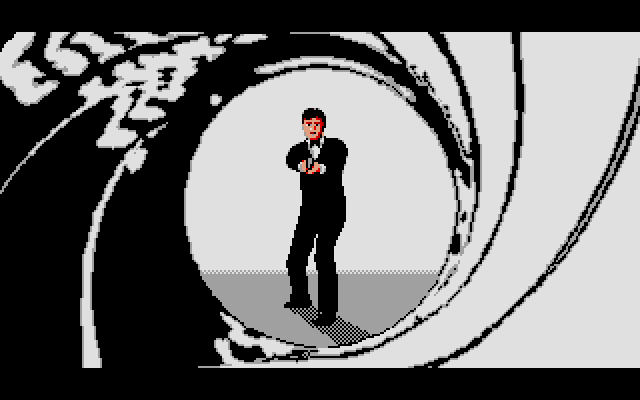 The ST version of the famous gun barrel sequence, it looks kinda corny. 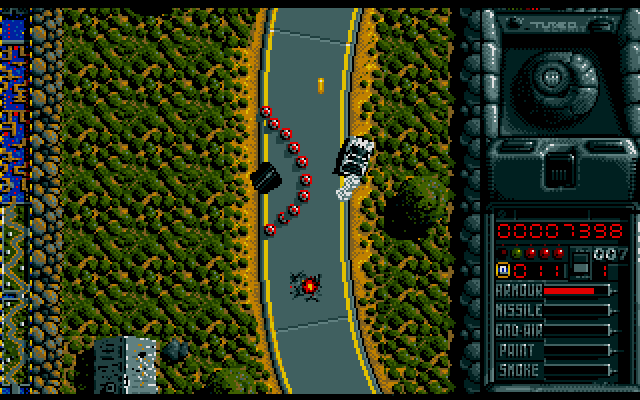 The first act. Get off the road and see your armour level going down the drain. 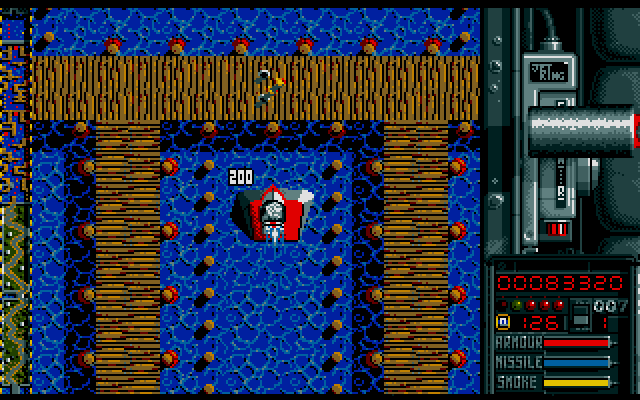 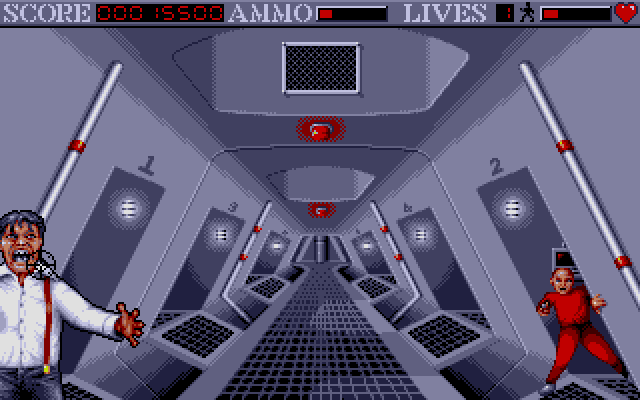 Meet Jaws. This guy really needs to pay a visit to his dentist. 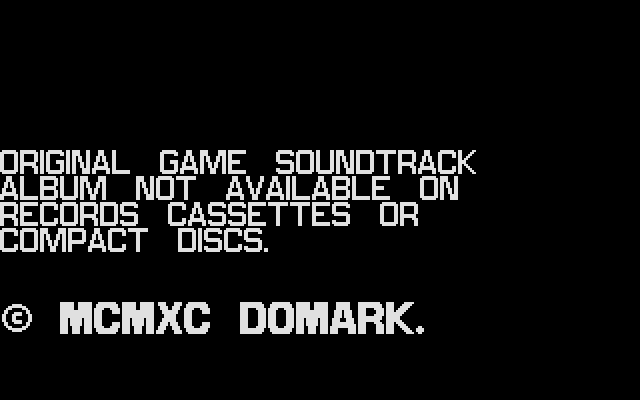 This stuff really makes me chuckle. 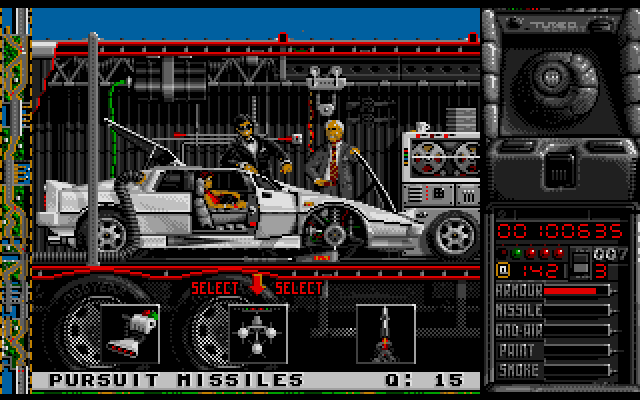 Welcome to the shop. Let's see what goodies Q has in store today. 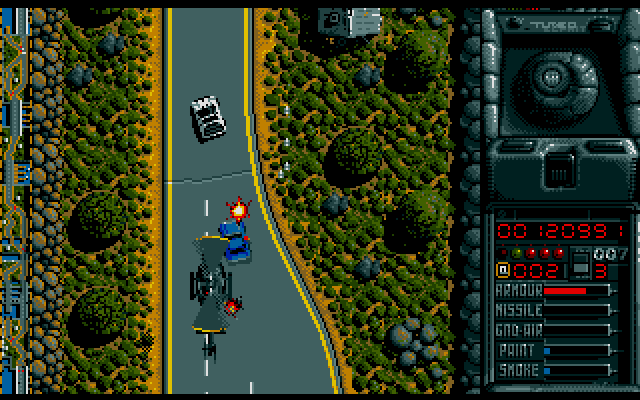 In another scene Airwolf joins the fun. 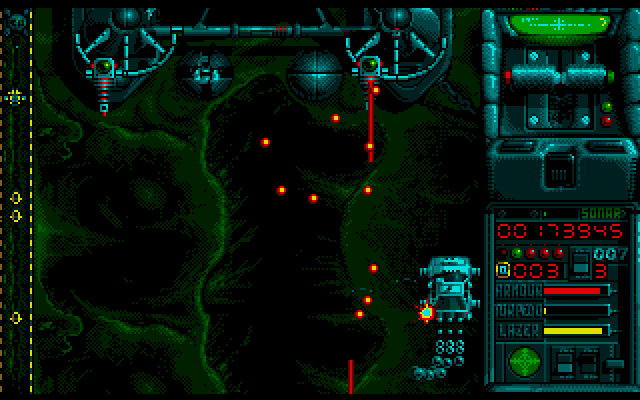 The aquatic shooting level is so well done. This is the boss stage. He will keep you busy, trust me. 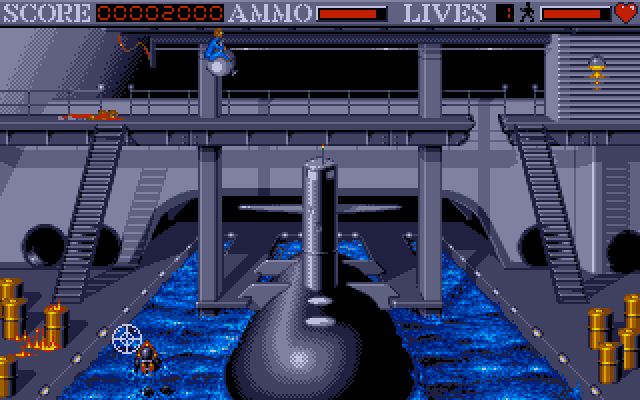 The shooting levels are a little explicit. I love it.

This summer one of the Belgian TV channels are running all the classic Bond movies in chronological order. Personally, I don't care much for anything that is pre-Dalton. Those movies are bit too slow for my tastes and haven't aged very well. Same goes for The Spy Who Loved Me. Too bad, cause I really like Roger Moore, especially in that Lotus Esprit. The game on the other hand is something else. Released one year after Licence to Kill, in 1990 to be precise, I guess they wanted to strike while the iron was hot. Movie cash-in games are usually nothing to get excited about, but with this title, Domark finally managed to give fans a Bond game to be proud of.

The Spy Who loved Me is clearly based around the same game-engine used in Licence to Kill, although this time they really perfected the complete package. While the visuals in the previous game were already pretty good, now everything is even more crisp and vibrant, with lots of colour, giving it an almost console-like quality. Scrolling also seems a little better, with no apparent slow down at all. The animation has been spruced up significantly. The way the car spins when driving over oil spills for example. And just look at those little traffic cones fly when you hit them with your Lotus, just marvellous. Everything moves with a certain grace. It's hard to put my finger on it. The game also looks like an actual Bond movie. Starting with the signature gun barrel sequence and rolling nicely into the movie-like intro credits. Each level is presented as a scene with a preceding screen explaining the part of the movie it depicts. This thing is just pure class.

The Bond theme we hear this time during the intro sequence is much better than in previous games, yet it still sounds like your run-of-the-mill YM chiptune. During the gameplay there is no music present, only sound effects. Which are mostly mediocre at best. Although the gun shot effects in the later Operation Wolf type levels are very good.

This is the department in which this game flourishes. Just like its predecessor, Spy Who Loved Me is a mixture of game types. So there is a chance you will like some parts better than others, but it does add to the variety in gameplay.

In the first scene you have to drive the famous Lotus to the harbour. This first level is a good way of getting into the game. The mechanics are just perfect. The car controls are spot on. On the right side of the screen you not only have the scoreboard, but also some features Q provided for you. Most importantly we have the armour, which will decrease when you are hit or get of the road, just until the moment that your ride explodes. It is possible to equip the Lotus with rockets, smoke and paint spills, but for now, you only use the fire button to shoot the missiles. There are a few enemy cars, but they are easily defeated. Important to note are the turning Q buttons on the track. Grab as many as you can, as these can be traded for upgrades later on in the game. Sliding over oil spills is fun but dangerous, cause once you get off the road, you're toast! If you manage to get to the harbour, you immediately continue the game on water in a speedboat. Watch out for dead ends and prepare yourself to get airborne. In all, this is a very fun, yet easy part to complete.

In the next scene you are on the run again and this is where the action really starts. Spyhunter fans (we ST aficionados will have to do with Major Motion) can start rubbing their hands in glee. This time there is a lot of enemy activity. Opponents are getting aggressive. Your armour will run low in no time. But you have the opportunity to hide in Q's truck. This time you can equip the car with homing missiles and most importantly, submarine capabilities. This last item is necessary to complete this level. You see, at one point you encounter a crossroads with a dead end leading to water. If you managed to equip your car correctly, you will be able to advance to the next level. If not, take the other way and you will drive straight to the start of the level again. It is an endless loop. So you have to figure out a tactic to get enough cash while avoiding the enemy. This doesn't necessarily mean saving all your money for the submarine car and not buying any weapons, as you won't make it this way either.

Next the game is turned into a shoot 'em up very much in the vain of Xenon 2. The Lotus has gone aquatic and at a pretty slow pace you must fight your way through divers and other submarines. This is a hard level. Make sure to get the upgrades scattered around the level. Things like side shots, torpedos and laser beams are a must to progress. But beware that you can shoot these bonus 'bubbles' as well, which turns out to be a frustrating feature. This is again a very well made part of the game, sadly this part becomes almost unbeatable by a very challenging end of level boss. I understand they wanted to create a bit of a challenge, but this is just ridiculous. It took me ages to pass and it had me screaming. One word of advice, shoot the 2 bullet-spewing turrets first as fast as possible (and try shooting them when the laser turret is also within reach) and make sure when your laser is depleted, only 1 of 2 enemy laser turrets are left.

We now enter the submarine level. The game is turned in some kind of Operation Wolf clone. You have to protect Bond, who is swinging from the ceiling, and shoot the guards. It is recommended to use the mouse here for accuracy. A fun level, very well made and after the previous shoot 'em up hell, a welcome change in pace.

Can anyone tell me why these types of games always need to have the obligatory puzzle level? After all the action it is now your job to reprogram the targeting computer with the co-ordinates of the submarines before they reach their launch sites. Once you cracked the code and entered the coordinates provided in the manual, the mission here is completed. You miss once, and the game is over! That's right, you came this far and it is back to the beginning. Not a difficult puzzle but for a first timer, this can be a real pain as there is a time limit.

The jetski level that follows is not a Spyhunter type of game as you might expect, but again a shoot 'em up. This time, however, the pace is a bit faster. you'll encounter 2 bosses but the difficulty is turned down a little.

The game ends again with a mouse-controlled shooter stage. You will meet Jaws and finally defeat Stromberg. If you make it, you are treated with a classic ending screen that will put a smile to any Bond fan's face...I will not spoil it.

The Spy Who loved Me definitely is the best bond game for the ST. In all, it is a pretty good game albeit very difficult. It needs a lot of practice, but there is enough to come back for. The Spyhunter-type levels are amongst my favourite gaming moments on the ST.
Sinclair User magazine once wrote "This one will leave you shaken but not stirred". A very nice way to put it. I would say this game looks really classy and it definitely has its moments ... Just like a good Bond movie, I can wholeheartedly recommend it.

LynXX
Great review, as always! I loved this game as a kid, but I remember it being pretty difficult. I think I never went past the underwater level...
August 18, 2018