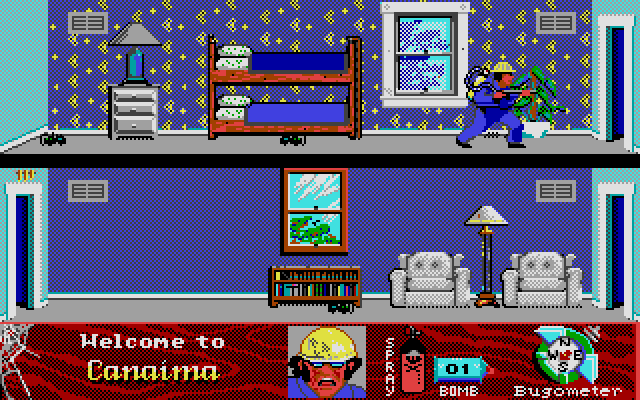 At the bottom of the screen there is some usefull info. Your health meter, the number of spraycans and its content and the nr of almighty bug bombs! 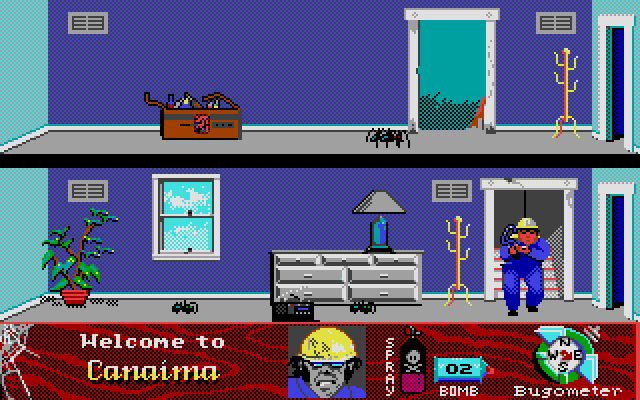 Delbert has been hit numerous times and he is starting to feel pretty sick judging by his looks ;-) 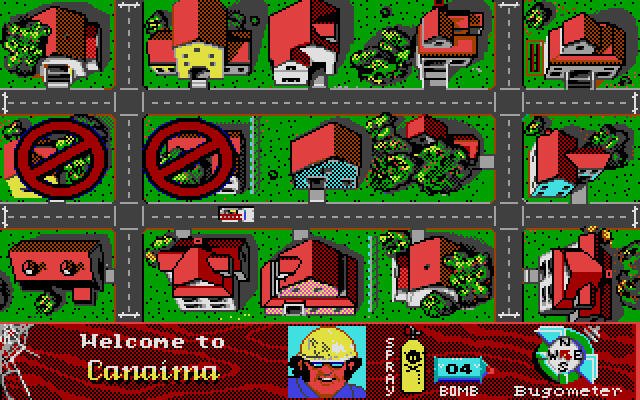 The 2D map does remind me of other classic games from that era. 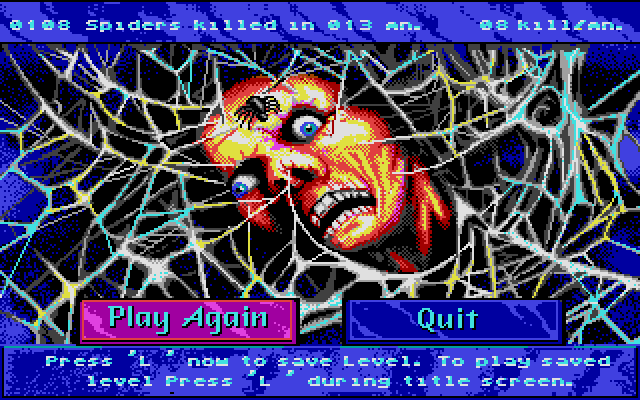 The gruesome end screen. Let's give it another go ;-) 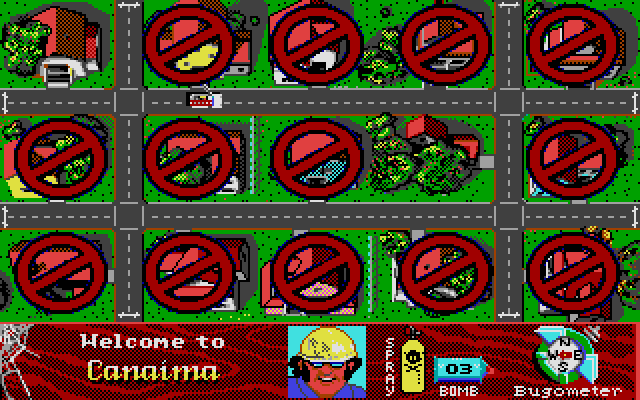 Almost completed the first town. Time to pay the queen a visit! 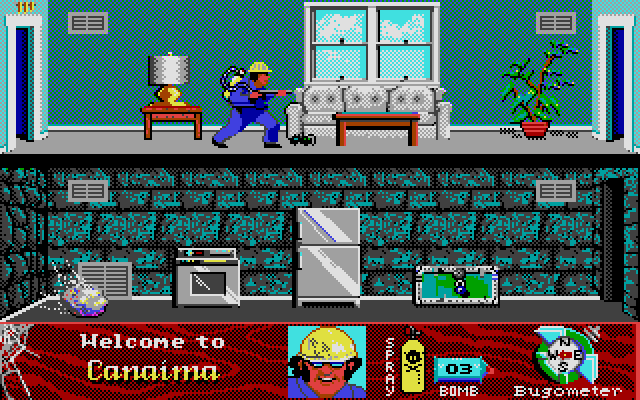 There below in the basement, is the source of all evil ... the egg nest! 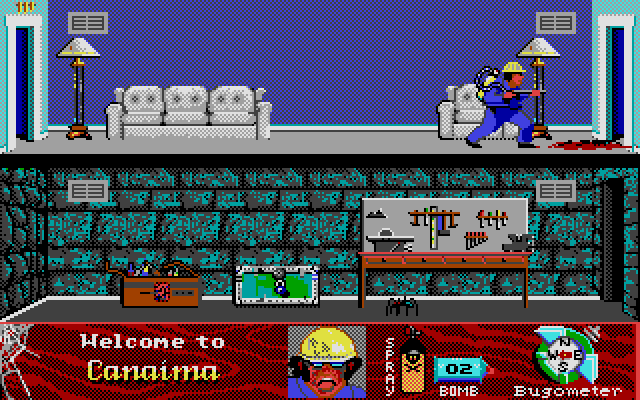 For all you gorehounds out there. Using your boots you can paint the floor in red. 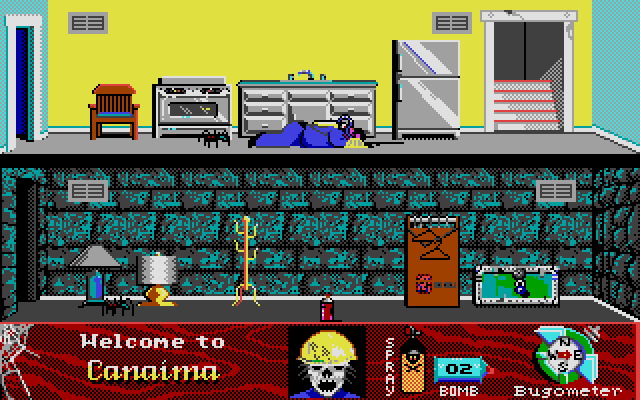 Killed by the Queen. She is a mean b*tch!

Who would have thought that in 2017, 24 years after the discontinuation of the Atari ST, we would be playing a brand 'new' never uncovered game on our favorite 16bit home computer? I sure didn't. And not just any game, a big movie license. This thought alone might sent shivers down the spine of many ST gamers, as movie licensed games usually were a recipe for disaster...Rushed and mindless, created to make a fast buck!

The arcade game Arachnophobia, created by Disney, is based on the movie from 1990 with the same title. The movie, produced by Steven Spielberg, is your typical run of the mill popcorn horror flick. (But oh how I love those early 90's flicks. Things were just way more simple back then). In the film, a dangerous spider has migrated from South America and starts to reproduce at a rapid rate, terrorizing a whole community in the process. Residents start to disappear and the new doctor in town finds out the bodies all have one thing in common...Spider bites. As a last resort, the governement calls in the help of Delbert McClintock, a crazy exterminator (played terrifically by John Goodman) who invented the insecticide "Toxi-Mag" that, according to him, can kill ANY spider.

In the movie, Delbert only appears after an hour, he is merely a supporting character. In the game however, he is the star of the show. You play as Delbert and you have to rid the town of all creepy crawlers. So hop in your bug mobile, and start using that spray cannon and those bug bombs. Is this game any fun? Let's have a closer look!

To me, this is clearly an EGA dos conversion of the game. We are presented with those typically purple/magenta type of graphics. I don't know how else to describe it, it just looks that way. It doesn't mean it is all bad, I just think more could have been done. Graphics are ok and everything is clear to the eye. There are also some very nice detailed cutscene pictures and a pretty creepy 'game over' portrait. Another cool touch is your health meter, which is presented by use of a picture of Delbert. With every hit you take, his face shows more signs of anguish and suffering. It reminded me of Wolfenstein or Doom on the PC.

Arachnophobia only contains digitized sound effects and little bits of digi music. None of those ym chiptunes we have grown accustomed to. There isn't much to write home about, it does the job. An intro tune would have been nice, but the in game sound effects are ok, and the sound created when a spider gets it, is strangely satisfying.

When you start Arachnophobia, you are presented with a top down map of a town. You drive the bugmobile past houses, schools... All of these houses are infested with spiders for you to kill. When you stop at a house, Delbert gets out of the car, enters the building and the game turns in a 2D side scrolling arcade game.

You use the joystick to move Delbert back and forth and to aim your spray cannon up and down. Pressing the fire button releases a shot of toxi-mag poison from your cannon, which is enough to kill a soldier spider. Spiders are everywhere, and they need to be killed one by one. These spiders are actually guarding an egg sack somewhere in the house. And yes, you guessed right, every house on the map has such a nest hidden somewhere, and it needs to be destroyed to stop the soldier spiders from hatching.

The 2D sections consist of multiple rooms and it is cool that the game actually remembers which spiders have been killed of. Meaning, when you re-enter a room you already visited, the dead spiders will still be there. Spiders do respawn from the egg sack, but the dead ones will not disappear.

There are different kinds of soldier spiders in every level. You have spiders that only walk back and forth, those are the easiest to kill. There are spiders that just jump up and down, but there are also the ones that actually latch at you. These are the tough ones and sometimes even made me jump my seat! In one of the houses on the map, there is also a queen spider hidden. These are instantly recognisable by the yellow striping on their legs. The queen can really give you a hard time and needs several shots before it is slain. Once she is killed and all the houses are cleared, you go to the next map. In total their are 8 communities for you to complete before entering the final stage in the amazon. Enough to sink your teeth in!

There are, as always, some extras to help you in your quest. Scattered around every hous you will find first-aid kits to restore your health, matches and aerosol cans that can turn your spray cannon into a temporary flamethrower that is capable of clearing a whole floor with one shot! You also always have a few bug bombs at your disposal. Using these will clear a whole room. A true can of whoopass. And should you run out of toxi mag, you still have your trusty steal boots to squish those crawlers to kingdom come. Although I do not recomment using this technique as it is the least effective.

These days I just hunger for a simple arcade game. No big story driven, time consuming, big budget extravaganza. Just that quick pick up and play feeling. If this is recognisable to you, than arachnophobia might be your game. A manual is completely unnecessary as you only will be walking left or right and use the fire button for the spray cannon. That's it. Lovely! It might sound dull, but killing these spiders is really satisfying and the game has a high 'let's give it another go' factor for me.

I sometimes wonder if this game is so much fun because it is 2017 and I'm playing a brand new ST game. Am I being subjective? Perhaps. But in this case, there just wasn't another way, as it wasn't available at the time of release. Even on the internet nothing can be found on an ST version of this game, yet Brume assures me this is an official release. He is even one of the lucky owners of a boxed copy!

Arachnophobia is a pretty decent game, quite addictive actually. And it will definitely give you a run for your money. Check it out.