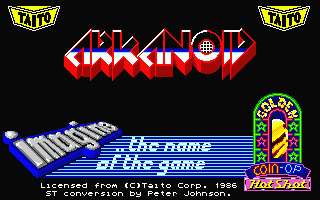 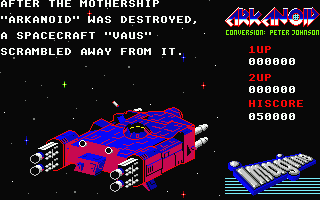 That darn background story again...lets skip it right away! 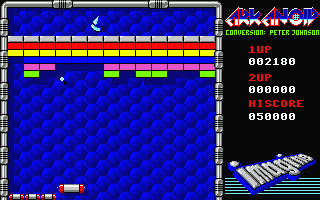 The first level is really easy...So don't miss the ball here, or you will be hitting yourself! 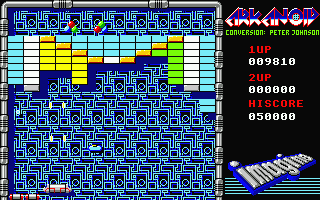 And all of a sudden the breakout game is turned into a shoot 'em up... 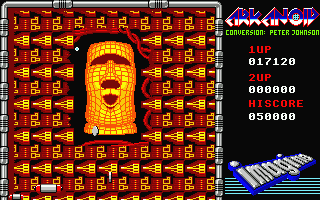 Have you ever heard of a little game called "Pong"? If not, well then you must have been on Mars for the last 30 years or so. This classic Atari game dates back from the 70's. In "Pong" you had to play some sort of tennis. There were 2 bats and a ball, and it was your job to try and bounce the ball behind the opponents bat. It happens sometimes that a game, derived from a classic idea, gets even better than the original. This is a bit the case with the following game. "Arkanoid" is the mother of all breakout games. We all know the concept by now. In this type of game we only get one bat and a ball, and it is our job to destroy the bricks at the top of the screen, by bouncing the ball at them. Once you miss to return the ball, you lose a life. It's really simple, and addictive, I can assure you. Originally released by Taito for the arcade market in 1984, it was converted to almost any home system at the time. Arkanoid even has a background story to it. It's dull, but here goes anyway :


(Taken from the manual)

The era and time of this story is unknown. After the mothership Arkanoid was destroyed, a craft, "Vaus", scrambled away from it, only to be trapped in space warped by someone.

A very slick presentation of the original arcade game. The graphics are colorful, backgrounds are nicely rendered and the animation is fluently. In the end, it does look a bit dated, but it is almost 20 years old anyway.

Nice intro and outro tracks and some good sound effects during gameplay. They all perfectly fit the environment of the game...

The idea of the game is very simple. Arkanoid consists of 32 levels. You have to destroy all the bricks in every level to finally meet the end boss. Once this guy is destroyed, the "Arkanoid" will be resurrected and the game is over. You can only move to the left and right of the screen. It takes some practice to control the ball properly.


To help you in your quest, bonuses are hidden in certain bricks. Once you bounce the ball against such an object, little cylinders fall down. Try and catch these with your spacecraft. These bonuses consist of extra fire power, multi ball, enlargement of your craft, sticky bat, skip to next level...They all have a different color and a letter on them, so you know what to expect.


But of course, there are also some features to make your life miserable. The longer it takes for you to complete a level, the faster the ball starts to move. You can solve this problem by catching the yellow bonus. Unfortunately, this goodie is a rare one. There are also enemies that crawl over the screen. if you hit them, they're destroyed, but they bounce the ball in a random direction. This is very frustrating. And remember, the more enemies you hit, the faster he ball goes! So it is recommended to just destroy them with your bat. There are also bricks that need to be hit more than once, and some of them are even indestructible.


At the end of the game, you'll meet the mastermind. This guy shoots at you. It is your job to hit him about 100 times and avoid getting shot. Controls are very good. The bat moves very accurately with the mouse. When you enter a level, the ball is stuck on the bat. Once you press fire, it is launched. This game got a follow up..."Arkanoid 2 : Revenge of Doh"...Which was even better. But that's for another time.

This is a classic. You'll be hooked right from the first level. It's always fun the play a quick game of "Arkanoid". One tip though, try not to get to frustrated, your computer mouse will be thankful :-) A real recommendation!