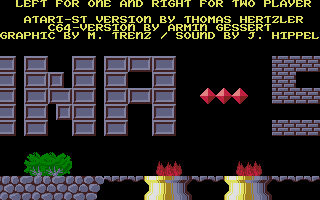 The intro screens flies by! 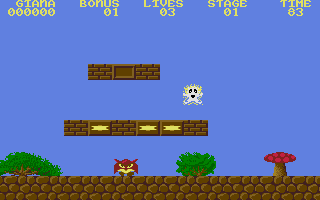 Did you know Giana was a punk-rocker? 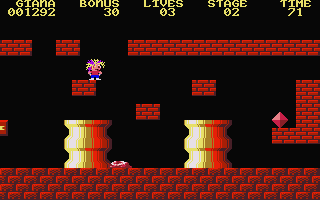 Once you got the powerball, you can destroy bricks - Like here, just trash the ceiling and jump up, that's a lot easier! 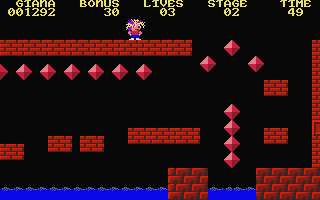 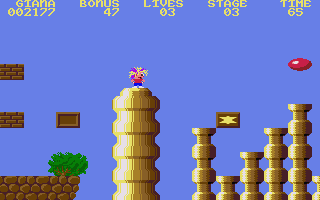 Some enemies can not be destroyed, like that red ball. You'll just have to try and cross it. 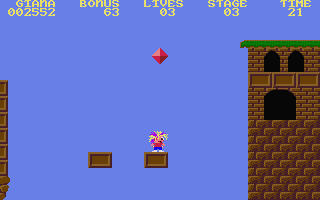 In the dreamworld there is almost no gravity, still, some jumps just seem impossible... 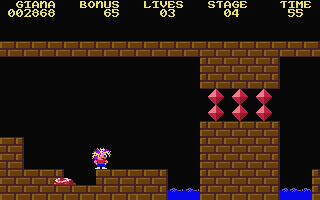 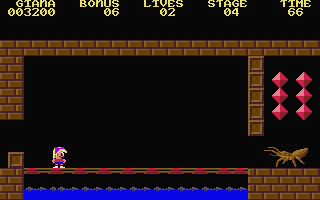 The first boss in the game...You can't seem to kill this baby! 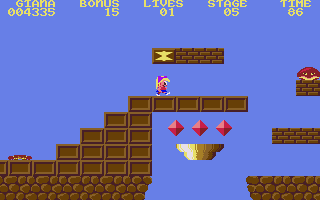 "Great Giana Sisters"...hhhmmm. Let's say that again..."GREAT GIANA SISTERS". Now that's a pretty neat name for a "Super Mario Brothers" rip off, he? "SUPER MARIO BROTHERS". Ok, I think you all get it. "The Great Giana Sisters" (TGGS) is the well known C64 classic from Timewarp that was once banned from the market by Nintendo. Why, do you ask? That's pretty obvious, not only do the characters in this game show a lot of similarities with the famous plumber duo that made Nintendo big, not only is the gameplay almost identical...But just take a look at the picture of the boxcover, for crying out loud. If your box provokes the big ones in the industry with a subtitle saying "Move over brothers, make way for the sisters" or "The Brothers are history", you're bound to be in trouble! I wonder what those people at Rainbird were thinking. It was impossible for a little company like "Timewarp" to stand up against the mega moguls of Nintendo, and the game was banned from the market soon after its release. Too bad, cause I really think it could have made a difference. Why would anybody bother buying a console when you could play "Mario" on your homecomputer? A nice stunt gone out of hand...


But did all of this prevent the game from spreading? On the contrary, cracked versions were distributed over the whole world, and even today, this game has loads of fans worldwide. first released in 1987 for the C64, shortly after it was converted to almost any other system, the ST included. The Atari ST version is the worst one around, let me tell you why...

Average at best. There are much better looking platformers out there for the ST. It all looks very similar to the blocky commodore 64 version. But in the end, it does the job. For the ST, a unique "flipscreen" scrolling version was created. This had to be done, cause the ST didn't seem to be capable of handling complex sidescrolling. We all know that is NOT true, but hey, we can't change past mistakes. For me, this is a bit of a let down, but it isn't that bad either, once you're into the game. And you'll soon notice that fancy graphics is not what this is all about...

A cool digital intro track (combined with the "sexy" intro shot). After that, the yamaha chip really kicks in and we're treated to some catchy in-game tunes. This one will stick with you, but what did you expect from a guy like Hippel? The soundeffects are nice, the usual platform stuff. Sonically, the game is no stand out but it is a nicely, polished all rounder...

The background story to the game is bitter sweet. You play as little Giana. One night, while fast asleep, you end up in her dreamworld. But this isn't the usual lollypop world you come to expect from little girls, no this one is inhabited by strange (and stupid) creatures. And even worse, you can't seem to wake up and escape! There is one chance though, if you can find the magic diamond, you'll be able to wake up and go back to reality. But to do this, you'll have to make it through the 32 levels ahead of you...


I don't know if I need to explain the gameplay? I take it you all know "Super Mario Brothers" ? Well, ok then, for you martians out there. SMB is a sidescrolling platform game, in which the hero has to make it through several levels, avoiding obstacles, jumping on platforms, killing enemy creatures by jumping on their head while trying to catch all kinds of bonus points on the way. Sounds familiar? Of course, cause it all started with this Nintendo cash cow!


TGGS has a lot of striking similarities, even though the main hero is actually a heroine. In Giana's dreamworld, you are also able to jump with great heights on several platforms, the baddies have to be destroyed in the same fashion, even the power ups are almost identical. Spread across the dreamscape, there are these blocks which might contain goodies. You have to give them a "head butt" to see what's inside. One of the many bonus items you'll encounter are the "powerball", which turns Giana in a punk rocker. You are now able to destroy bricks, which might help you open secret passages and hard to reach places.


Its also possible to get some fire power. If you manage to find this, you can shoot your enemy. There is of course a lot more, like extra lifes, extra time...You all know the drill. Also hidden in bricks are so called "magic crystals". Once you've collected 100 of them, you can dream longer (get an extra life). Remember the little coins in Mario? But should you collect them all? That's up to you. Keep in mind there is a time limit, and you have to reach the end of each level within 100 seconds or you'll lose a life. Apart from the enemy creatures, there are pits, spikes, fires, rivers and lots of other things to avoid or jump over.


The level of difficulty rises gradually, though I have to admit, there are some nasty tricks early on in the game, some hard to make jumps. So watch out. Also keep in mind that, once you get in touch with another creature, you're dead, it doesn't matter in which power state your are. So if you're used to playing Mario, this might be something to get used to. You do not get smaller or lose your powers when you get hit before dying!


For all you hardcore platformers, this game contains a lot of hidden rooms, level warps and bonus rounds, which can only be found by playing it over and over again. Controls are accurate. Just use the stick to walk, jump and shoot. Oh, and there is NO run feature. But hey, who needs that? A two player option is also implemented. In this mode the second player plays as Maria, Giana's sister. You'll have to switch turns.

There was some sort of sequel released, which also made it to the ST. The game was called "Hard 'n Heavy", though Giana, nor her sister, were anywhere to be found...

TGGS is a fantastic game, no doubt about it, and the ST version is just fine. The graphics are average, the music is good and the gameplay is awesome. If you always wanted to play Mario on your ST, this is your chance. TGGS is just as good. When you play it, you'll understand why Nintendo got the heebee geebees when this came out. But if you're not just an ST fan and wanna play the best version of TGGS, get your hands on the C64 version of the game! (And believe me, I hate to admit that :-)