Your heart is pounding like hell. It feels as if it's gonna explode within seconds. Sweat is dripping of your face. In the background you hear those annoying sirens. You're completely focussed on the road, as the local cars fly by. You push the pedal to the metal...272 km/h...There, in the distance, is your opponent. You just gotta beat him, or he's gonna take all your money. But those damn cops. You just can't seem to shake them. They're coming closer and closer. Shhhhrrriiiieeekkk...They're trying to push you to the side. More damage inflicted on your precious Lamborghini. And all of a sudden... Bbbbaaaaammm...


This is a pretty normal scene from the game. "Crazy Cars 3" was the last instalment in the "Crazy Cars" series. And the best. But that isn't so hard! The first game dates back from 1987, and it wasn't really great (to say it mildly). In 1989, the follow up arrived. This game had better graphics and sound, but gameplay was even worse. Finally, in 1992, Titus delivered. Crazy Cars 3 got great reviews and was even compared to the hyped "Lotus Trilogy" from Gremlin Graphics. A new American version was released later on, called Lamborghini : American Challenge. This was the same game, with a 2 player mode implemented. Sadly, an ST version was never released...

This game has it all! Great graphics, detailed backgrounds, bright colors, cool weather effects...It's all very polished. You can race on the icy roads of Desmoins or try the sunny beaches of Miami. It's your choice! All the characteristics of the courses throughout the US are here...Just take a look at the shots on this page!

A pretty good intro track...Too bad it gets very repetitive. Some in game engine noise and some very annoying police car sirens to get on your nerves...In other words, nothing special at all!

In Crazy Cars, you are some sort of lone ranger, who just can't seem to find a job. So you have to take part in some kind of illegal races to make money. You start in the fourth division. Here you can chose between a huge selection of tracks. Everytime you win a race, you earn money. Once you made 50000 $, you may enter the division race and try to get up a level! This is a hard time trial track, with traffic going in both directions!


Let me just say that I think Crazy Cars 3 is an awesome game. I think it's as good as the Lotus games. Don't expect a realistic simulation, this game has arcade written all over it! Controls are pretty good, but it is sometimes very hard to keep your car on the track, especially when the road is wet or icy! This takes some practice. But it's just great to drive past all the locals at a speed of 300 km/h (with the cops on your tail)!


But what differs this game from other racers is the fact that you not only push to finish first! Before each race you have the opportunity to take bets with three opponents. So If you don't manage to end first (and thus are not rewarded with the money price), you can still get some cash if you beat your rivals with whom you made a bet! On the other hand, you can also loose lots of your income...


Each track has its own level of difficulty. The harder, the more money can be won. On your way to the finish line, you'll also sometimes meet cops. Remember you're driving on American highways and there IS a speed limit. These guys will do anything to take you in! Shaking them of is pretty though. Later on in the game, they even have cameras to make automatic fines, so beware! After every race you'll have to drive past the garage to repair your car. The more you bumped into your opponents, the more it 'll cost ya! There's also a shop where you can upgrade your Lamborghini with boosters, police detection units...

Crazy Cars 3 is a great game. A must for every arcade racer fan! You get a great feeling of speed (especially with the booster activated!) ...It's a real adrenaline rush! Try it... 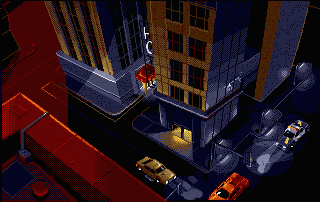 A shot from the nice intro of the game. 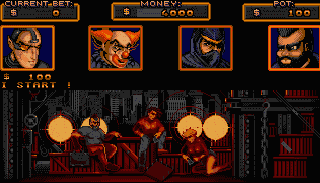 Who wants to make a bet with these weirdos anyway? 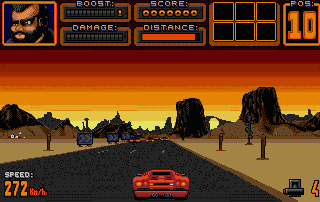 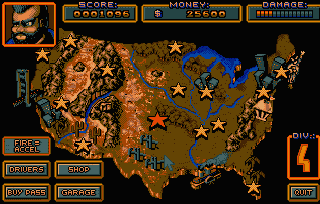 Every star on this map represents the location of a track of the 4th division. 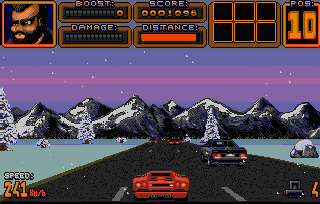 Desmoins...Watch out, the road is very slippery and the opponents are real bad guys! 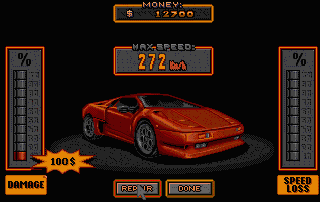 Beware, repairing your car can take a serious bite out of your income... 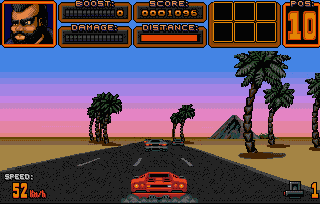 Miami beach...I wonder if the babes from Baywatch are here? 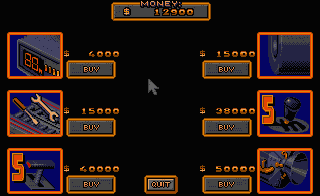 Have you ever seen a Lamborghini fly? Try the nitro boost! 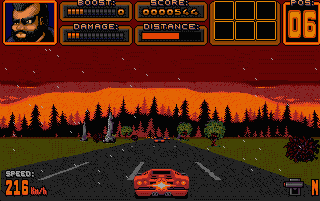 The weather effects in this game are so cool! 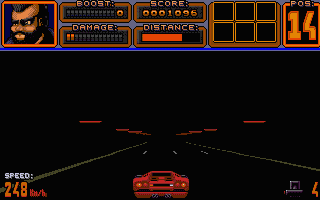 AtariCrypt
This looks brilliant and shockingly is one of those games I don't think I've played.
Great review!!
July 3, 2018