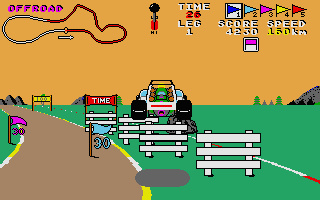 Use the wooden blocks to leap past these posts and get the time bonus! 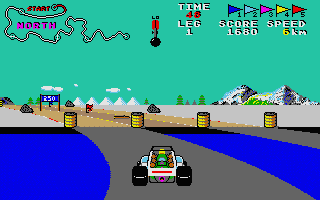 Crossing the river can be a real pain in the butt! 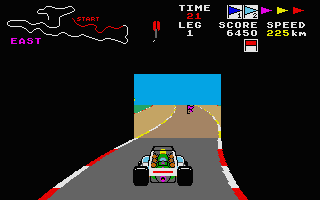 Finally, light at the end of the tunnel! 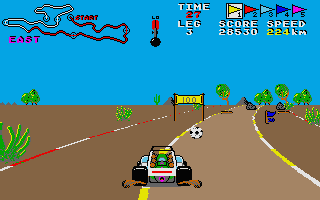 Try and hit the infamous football for extra points... 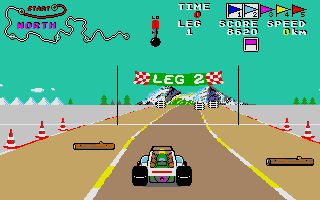 Racing against the clock, reaching as many checkpoints as you can, avoiding the obstacles on the road...Yes, I know, The idea behind buggy boy (or "Speed Buggy", as it is called over seas) is nothing original. It has been done a million times before. Yet, this game manages to stand on its own and can easily be called a classic! Being a popular hit in the arcades, it was later on (in 1986) converted to the home market by ELITE. Buggy Boy was one of the first racers I played on my ST as a little boy, and I have some very fond memories about it...

This game is very colorful. Big, cartoon style sprites rush by as you race the different courses. Everything is nicely drawn. You see your buggy from the third perspective (as the pictures on this page already spoiled), giving you a nice overview on the whole of the scenery. Buggy Boy scores high marks in this section!

There isn't really much to hear. We get some short music clips when selecting one of the five courses. The in-game sounds consists of some engine noise, some bonus tunes...It's not much, but what's there isn't bad either!

Most of you might already be bored to death by reading all of this, but you actually have to play this game to know what I'm talking about. Buggy Boy is a big winner when it comes to gameplay! It's very easy to learn. The joystick is used for controlling the car and the fire button switches between low and high gear. And that's about it! Controls are pretty accurate. Though it is still very frustrating to drive past a bridge! The game actually manages to give you a feeling of speed, but this also has a downside ...


There aren't any opponents, the only thing you race against is the clock! Yet, while playing, buggy boy is a very relaxing game. There are 5 different tracks to choose from (Offroad, North, East, South and West). Offroad is more of a practicing track, to give you a taste of what is to come. Here you have to complete laps to finish the track. You have to complete the other tracks by driving past their different checkpoints!


While you're "cruisin'", it's your job to avoid the different obstacles and score as many points as you can. There are wooden posts, brick walls, lakes, rocks, tunnels...to watch out for. But the really fun thing is that these obstacles can sometimes help you. Take the pieces of wood for example, when driving straight over them, your buggy bounces sky high. This way, it's easy to jump past brick walls. Another cool touch is the possibility to drive upon slanted embankments.


To score extra bonus points, each course is filled with colored flags! When hitting them, you will be rewarded with the amount of points shown on each of these flags. When you manage to collect them in a certain order, you can win even more bonus points! It is also possible to gain extra time by hitting the time flags. They are mostly a bit harder to reach. Watch out for the footballs you might encounter, they are very valuable.

Buggy Boy is a lot of fun. It's very easy to play, making it even accessible for the little ones! Though it might seem a little dated and the concept might be worn out completely, it's all fantastically excecuted...Making it one classic you can't afford to miss!