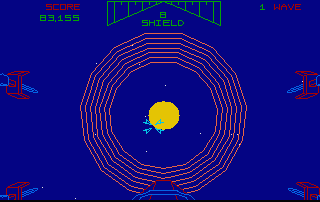 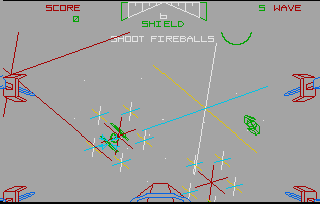 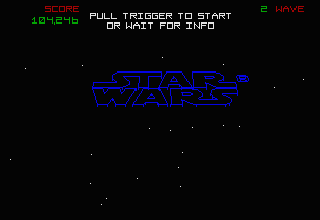 The first glimpse of the graphics. No fancy polygons this time...Just good old vector graphics. 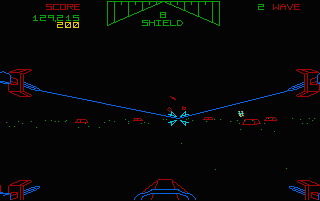 The surface runs are my favorite part of the game...then again, it's also the easiest section :-) 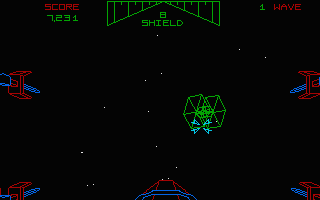 The first part of the game. Shoot the waves of incoming Tie Fighters. 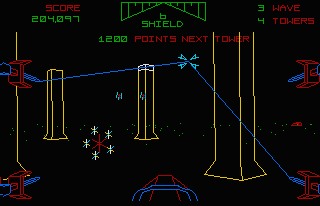 These laser turrets will try and prevent you from reaching your destiny...Blowing up the Death Star! 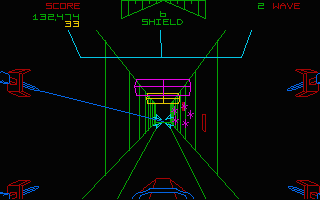 You can earn extra points by

As a big Star Wars fan I thought it was about time to check this Atari classic out and give it a go. This game is a bit before my time, I suppose. It was the first Star Wars game ever to grace the screen. Originally created by Atari Inc. for the arcade industry (with loads of success) it was later on converted to the home market. The Atari 2600 being one of the first machines for it's release. Today this game has the status of being a cult classic. My first experience into the Star Wars games was the PC version of "X-Wing". One of the best space combat sims I've ever played. So I wasn't really expecting much from this title. But admittedly, I was pleasantly surprised.

Nicely rendered vector graphics like the ones seen in e.g. "Battle Zone". Vector graphics were at the time the best way to render 3D graphics and animation. Personally, I like it. It just gives me that "good old days" feeling. Animation is good and the game runs actually pretty fast. Although I have to admit, the "Death Star" explosion is awful - but it wasn't much better in the arcade versions!

This is the best thing of the game. Apart from the usual sound effects, speech samples from the movie are implemented. So while playing, you actually hear someone screaming to Han Solo: "You're all clear kid!!".


There is more, but I'm not gonna spoil it. This is a real treat for the Star Wars fans and it adds immensely to the atmosphere of the game. You actually think you're in the movie.

A straight forward shoot 'em up. Don't be expecting a space combat simulation, you just don't have enough freedom of flight. The only thing you have to do is shoot the enemy and avoid being hit. But does this make it less fun? Not really, cause the game actually delivers....


The whole thing is focused on the last part of the original movie, the attack on the "Death Star". You're a pilot of an X-wing space craft and it's your job the complete the mission. The game is divided into different waves and each wave contains of 3 main sections. Before you start playing you can choose the level of difficulty. After this you enter the first section and the mayhem begins...

In this part of the game you have to destroy all incoming Tie Fighters. Your X-Wing has 8 shield points, and everytime you get hit by an enemy fireball, you lose a point. Once your shield is gone and you get hit, the game is over. You can avoid being hit by shooting the incoming fireballs. In this section you haven't got any control over your fighter. All you have to do is aim and shoot. Watch out for Darth Vader's modified Tie Fighter. Although he can't be destroyed, you get extra points everytime you hit him!

Here you have to destroy the Laser turrets. You also have control over your spacecraft, which makes it even cooler. In later waves you can earn extra points by shooting the towers.

This final section is a recreation of the Death Run from the movie...and a damn good one too. Here you also have a limited freedom of movement (mostly going up and down). You have to avoid the incoming fireballs and finally shoot the exhaust port at the end of the trench. You only get one shot at this. If you miss, you loose a shield point. In later waves, everything gets a lot tougher. You will also have to avoid barriers to make it to the end. When you had a direct hit, your mission is complete and you move on to the next wave.

It's really fun. This is a game you'll be running quite often for a quick blast. Just start immediately at the "hard" level and shoot everything. It really recreates some of those great movie moments. Don't expect an "X-Wing" or "Epic", this is way more simplistic. You should definitely give it a try!

AtariCrypt
I think I've only ever played this on the speccy... and that was on disk too oddly enough using the 3. I'm no starwars fan, I just remember the shop having nothing else for the 3 at that time. lol.
Great review mate!
October 10, 2018