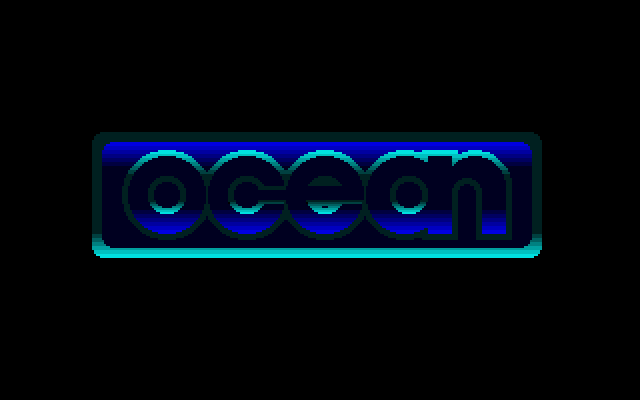 The OCEAN logo got a little overhaul for this game. 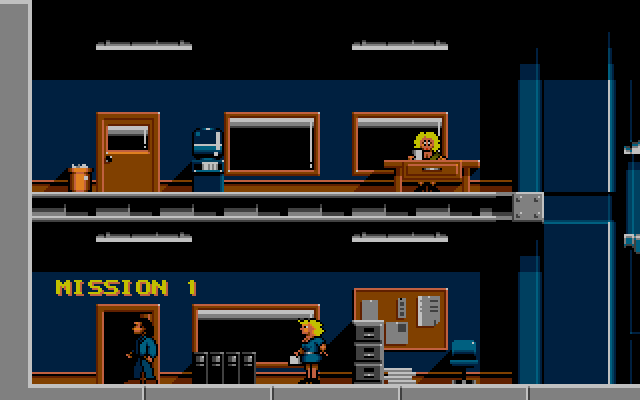 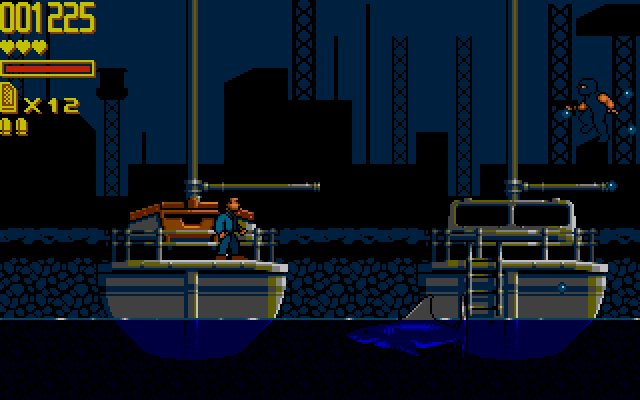 Jaws makes a cameo as well... 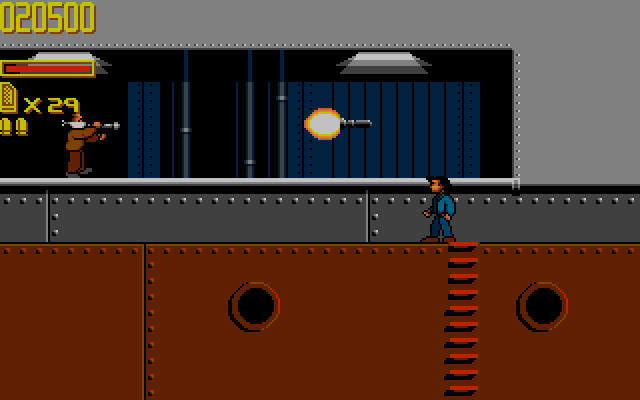 Flame throwers, rocket launchers, we have it all. 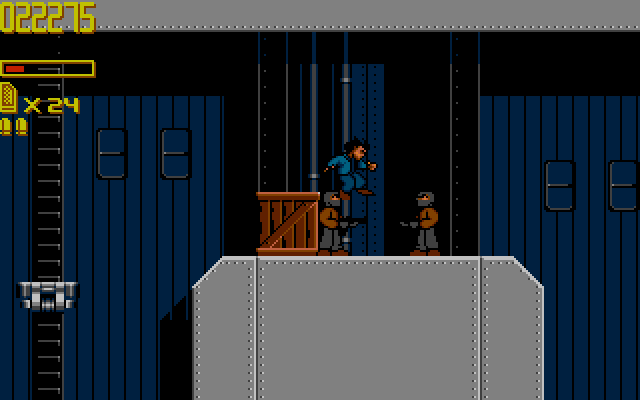 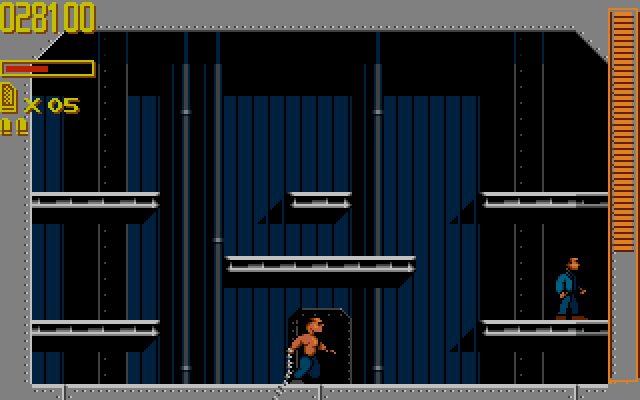 The boss of the first mission is into S&M! 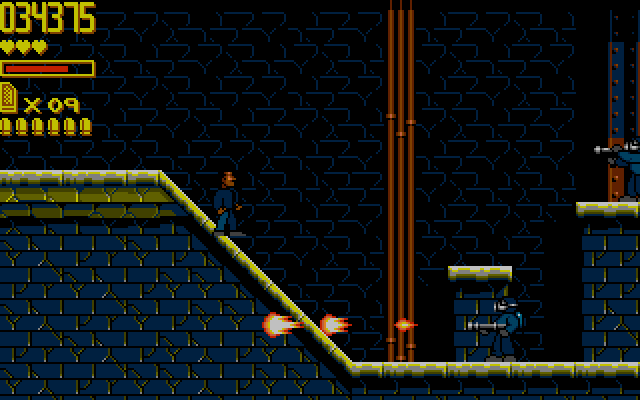 I don't know what it is exactly, but for a lot of us 80' kids, the Christmas holidays are in some strange way connected with Hollywood action films. During the 'most wonderful time of the year', I never watch any Santa Claus movies, no, I'm looking for stuff like Die Hard, or Gremlins. It is becoming a strange cliché, but I love it. And I'm not the only one. Kim Justice just did a great YouTube video on the subject and he inspired me to do this review.

Lethal Weapon might not have that Chrismassy feel to it, but it is a fun 'good cop/bad cop' action movie nonetheless. The game, loosely based on the trilogy, was one of Ocean's last platforming efforts for the ST, and not a bad one either. Usually movie licenses are nothing to write home about, but Lethal Weapon has a strange quality to it. I used to boot this one up on rainy Sundays to play a couple of levels. It was appealing to me back then. Question is, do I still feel this way 25 years later?

Simple, yet lovely detailed sprites, great use of the 16 colors available and nice animation (Riggs' mullet waving up and down as he walks is a classic). There is one big drawback however. The dreadful flip-screen scrolling is used and it is more painful than ever (more on that later). It still is a good game on the ST as long as you don't play the Amiga version.

Some pretty good chiptunes by Jonathan Dunn and minor sound effects. Nothing special, still, I like the music in the game.

In a way, Lethal Weapon is no ordinary platform game. The main characters both have a gun at their disposal which makes it possible to shoot the villain from a far. This gives it a bit of a run and gun feel. Think of it as a cross between a regular platformer like The Blues Brothers and mix in some Turrican. (although that last title might be a bit far fetched - Nothing is as good as Turrican, right?).

You start the game in the office building, where you have the option to choose between Rigs or Murtaugh.You do this by entering the locker room. I did not notice any real difference in gameplay between both characters, I think it isn't much more than a sprite change. Once you picked your main hero, you may enter one of the 3 unlocked office rooms. In here, screaming captain Murphy makes a cameo and gives you the mission briefing. This is a fun little nod at the movies. In total there are 5 missions for you to explore and complete. 3 of them are available from the get go. Each mission consists of a bucketload of screens filled with mayhem. Apart from the graphics and level of difficulty, there isn't much of a difference between each them.

Level design in Lethal Weapon is pretty good, with a lot of baddies for you to shoot or kick (if you are in close range), bossfights to overcome and hidden secrets to uncover. This all sounds nice and dandy, but the game does have its flaws. Two, to be precise. First we have the dreadfull flipscreen scrolling, a feature only us ST aficionados will have to endure. This definitely raises the bar and creates a level of difficulty which was not intended. We are now treated with one too many 'leaps of faith' and death traps, it sometimes feels unfair. A problem indeed. Also bad guys, which would be visible for players of other versions of this game, are now placed in the blindspot, as you did not move your character enough to the side for the screen to flip over. Problem is, they do see you, and bullets will start flying in your direction. And boy, it sure isn't easy to avoid incoming fire like this. Which brings us immediately to the second drawback which will make your teeth grind. When you get hit or when you run into a baddie, you are pushed backwards. And since there are a lot of pits, you will fall to your death quite often. Not fun.

Oh, and even if the enemy AI is none existent (they just stand and shoot, or walk in a fixed pattern), they pop up from out of nowhere and they come in high numbers. Repeating levels and learning the positions is key in finishing the game. Practice makes perfect. Luckily, you have several lives when you start, and you can get hit 4 or 5 times before your guage depletes and you lose one. Hearts are scattered throughout the scenery to help you in your quest. Also make sure to grab all ammo clips before you run out of bullets. If you manage to complete a mission, you are rewarded with a level code (which can be used in the computer room of the office building). In later missions, there is also a minor puzzle element. But don't worry, we are only talking 'pull this switch to open that door' kinda stuff, no brain crackers...

Even considering its flaws (which are mostly version specific), I still think Lethal Weapon is a fine game, and one of the best movie licensed platformers by Ocean. For some reason, I always compare this to Hudson Hawk. That game as well had this sort of class to it.

The game has aged well, with its simple yet pretty graphics and straightforward design. It is however, damn hard. I was able to complete one mission for now. Do I still think it is worth it? If you are an action platformer fan, I would say definitely. Admittingly (and to put it in the words of agent Murtaugh), the frustration level is high, and I do feel sometimes "I am getting too old for this shit!". But I'm pretty sure if you are able to complete the ST version, the other games are a walk in the park. Only for Die Hard fans of the genre! ;-)