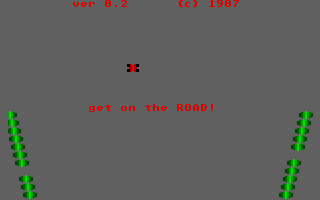 There you have it, the game screen ... in all its colorful glory ... 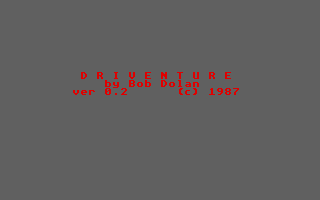 Every game programmer, or everybody out there who ever wanted to become a game programmer, must have created the kind of game I'm reviewing here right now. You know, two simple lines which would be the side of the road, and a little asterix or other ascii sign depicting a car. I remember vividly how my nephew and myself tried to create something like that from a basic book we got from the library. And in the end, we got the thing running, even though we had absolutely no clue what we had done.

Anyway, some really good things spawned from this little game idea. One of them would later be called Spy Hunter which would become a classic arcade game. For our Atari ST we had the fun Major Motion and ... Driventure (cough cough).

Some of you might wonder why I'm actually reviewing this little game, since it is clearly an amateuristic effort ... Well to be honest, I have a bet running with fellow Atari Legend mate Marcer. Do you think I can fill a complete page by just writing about this game? ;-)

It just doesn't get any worse on your ST. Well, I haven't seen anything less appealing on my monitor screen. Okay, we actually get a graphic of a little car instead of a dot, and yes, the road sides are colorful, I know ... But ... Oh, never mind!

Just humming of our precious YM chip. the faster the car goes, the higher the pitch of the humming, just as in real life!

The game starts immediately and before you now it the "try again" question appears on screen. You control the car by mouse. The lower you get the car on screen, the faster everything will go. The mouse controls are actually pretty decent, and the response to your movement is good.

There are no levels to speak of, just try and hold on as long as you can. And that's about it ... And believe me, it is fun for a full 10 seconds!

Indeed, Driventure truly sucks! This must have been the first game that gets a bare minimum score. Hey, lets hope the creator learned something from his programming efforts and went on to achieve major goals! And I also bet we got this little game for free! So why complain, he?

Still I suggest you rather boot up Major Motion or The Spy Who Loved Me, if you are in the mood for this type of game. In the end, there are only a few good Spy Hunter clones for the ST. And be sure of it, Driventure is not one of them.