The Karate Kid 2 is another game that oozes in 80's atmosphere. Everybody in their early 20's must have seen the movie and, Just like me, had to start taking Karate lessons afterwards. If it was only as simple as painting a fence or waxing a car...


The game itself dates back from 1986 and was one in the first batch of fighters available for the ST. At the time the competition was already pretty stiff, with the nice "International Karate" and the superb release of "Barbarian". But Karate Kid 2 had a quality of its own. Or what did you expect from the famous duo Steve Bak and Pete Lyon? I treasure some precious memories about this game, and I bet I'm not the only one here. Once the intro picture pops up on the screen, and the famous "glory of love" song by pop artist Peter Cetera starts playing through the speakers, you're immediately dragged back to the good 'ol days...

The graphics look very slick, especially considering the age of this product. There are a variety of nice backgrounds from places seen throughout the movie, like for example Myagi's ruined garden. Animation is also very good. All the movements of the characters are fluent and realistic.

The sound isn't really special. A Yamaha version of the "glory of love" song at the title screen, and some nice in-game sampled sound effects to represent the moans and screams of the characters when they are hit...

So graphically and sonically everything seems to be okay, but what about the gameplay? Well, it's all pretty straight forward and it reminds a lot of the other fighting games of that era. You'll have to fight different characters from the movie, and they'll get smarter and harder to beat as you progress in the game. All the fights take place on a different spot, in chronology with the events of the movie.


You only get one life, which is very frustrating, as the characters become stronger really fast. Once you got beaten, you might end up in the highscore table, but you'll have to start from scratch. Controls are pretty good. Just wiggle the stick in the preferred direction and press the fire button to punch, kick, jump or block... You'll need some more practice to beat the game, because the actions aren't as easy to execute as in let's say IK+ IMO.


All this might sound pretty boring...And actually, it is! But the real treat here are the bonus games, which appear after every 2 rounds or so. You remember the scene where Myagi picks a fly out of the air with the chopsticks? Well, now is your chance to try it yourself. I used to play this all the time, but I only managed to catch the bugger once or twice. If you accomplish your goal, you'll receive the extra points. The other bonus game is the famous "breaking the ice with bare hands" scene! Remember what Myagi thought you..."Focus, Daniel san"! These little bonus rounds make it all worth it, and believe it or not, they have become classics in the history of Atari ST gaming!


Of course there is also a 2 player mode, where you and a friend can beat the crap out of each other. This is of course the most fun, cause the one player mode gets repetitive pretty fast! And in all, the game is also a bit short, with only 6 fights and 2 bonus rounds before you see the end screen! So playing with a friend, really is the way to go...

"Karate Kid 2" is a pretty good fighting game for the ST, but it's far from the best! I would much rather recommend IK+ or Barbarian, or even the original International Karate. Still, it has a strange quality to it. And you should definitely check it out just for the implemented bonus rounds, they are awesome! So in conclusion I suggest you give the game a chance, you might enjoy it... 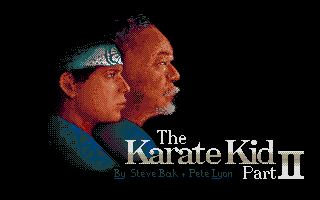 Here you have a portrait of 'em - Pete Lyon and Steve Bak :-) 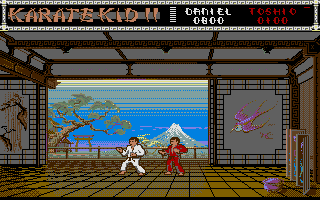 The first fight - Toshio is an easy prey! 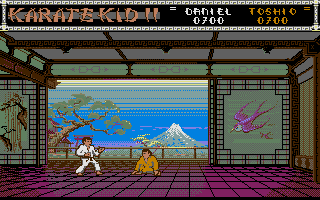 Second fight with Toshio. This time he's a bit pissed :-) 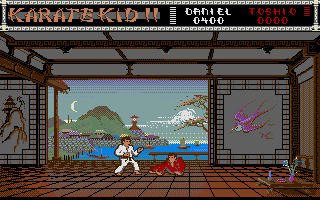 Notice the different window backgrounds in this level... 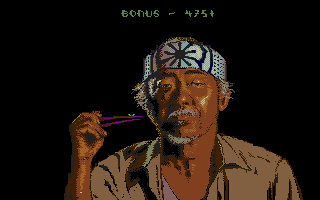 YES!! I managed to catch the fly again. You see, it really is possible... 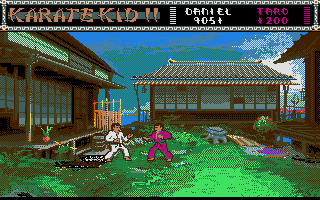 They ruined Myagi's garden, this calls for REVENGE!! 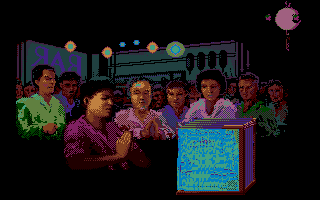 Would somebody please kill that fly? I'm trying to concentrate here! :-) 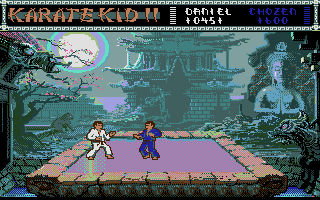 The final fight, I never managed to slay Chozen!