We all make mistakes. Even now, I'm almost turning 40, I wrote something ... silly. Last summer I was on a James Bond high. The Atari ST has three Bond games available. I played two of them, Licence to Kill and the amazing The Spy Who Loved Me. I took a rain check for the third game, Live and Let Die, for the time being. Why? You might ask. Well, in my review of Licence to Kill, I wrote "Prior to this title they already released Live and Let Die, a mediocre Fire & Forget game on water". And as fellow Atari Legend member Stefan Lindberg pointed out, that was a big mistake.
I guess I was thinking of the game Off Shore Warrior. Stupid me. Little did I know that "Live and Let Die" was created by Martin W Ward, the person responsible for one of my favorite arcade racers Buggy Boy.

The history of this game is an interesting one. You see, Martin was working on a follow up of Buggy Boy called "Aquablast". This game would become an action packed Buggy Boy on water. However, just before publisher Elite wanted to release the game, rival company Domark, who back then had the licence to the Bond games, came in the picture. They saw the finished product, noticed it looked like the speedboat chase scene from the movie, and wanted to release "Aquablast" as the game "Live and Let Die". Elite gave in, they knew licensed games would bring in bigger bucks. Some minor modifications had to be made, and the rest is history. However, Domark did not have the Bond license on American soil, so overseas, Elite still released the product as "Aquablast". If this version ever made it to the ST, is beyond me. It does exist on the Amiga.

It is obvious that this game is built upon the engine created for Buggy Boy. And according to the programmer, Live and Let Die has some enhancements over its predecessor:
- A triple-buffered screen for smoother animation
- Horizontal line interrupts for 'spectacular colour-gradient skies'
- Smooth sprite scaling gives a much improved 3D effect
And yes, as a Buggy Boy fan I can say this 'sequel' looks better and runs even smoother. It feels like 60 frames/s, constantly. But the playfield is smaller because of the guage displayed at the bottom half of the screen.

A pretty nice YM Bond theme at the menu selection screen. In-game sounds consist of the boat engine noise, your gun blasts and loads of explosion and crash effects. Good, but nothing special.

The game starts at the mission select screen. Here you can choose between four levels. First there is target practice. In this level you must shoot the red targets with the forward-mounted machine gun and the black targets with missiles. There are also two training missions, where you can practice the basics of the main game. Each mission is played out on a waterway in a different part of the world... Norwegian Fjords, Middle Eastern Desert... You name it.

But let's delve right into the main event. There is one true mission for you to accomplish. In this mission you must defeat Dr. Kanaga, who is trying to get full control over the US drug market, flooding America with tons of free herion. In this mission you start in the American jungle, and with lots of skill and a bit of luck, you may reach the heroin processing factory and destroy Kanaga once and for all (so the manual explains).

And oh boy, you WILL need skill and luck! You control the speedboat using the joystick, use the fire button for the machine gun and the ALT key for missiles. Right from the start you will notice there is A LOT going on in this game. The waterway is just filled with obstacles like rocks, mines and logs. Apart from this, we have enemy boats, rocket-firing turrets on the side and bullet-spewing planes in the sky. If you hit a rock or mine, you explode. If you collide with an enemy boat, you explode. If you get hit by incoming fire, you explode...

The enemy boats are easy, use the machine gun and blast them to kingdom come. The airplanes are something else. You will need to launch the boat into the air using a log, and shoot the planes from the sky. Good luck getting your timing right.

Now all of this might sound a bit much, but that really is not the biggest problem with Live and Let Die. In Buggy Boy you had checkpoints to reach in time. In this game, they have taken it all a step further...or maybe better, a whole leap further. You see, you run out of fuel when moving forward. And you run out of it fast, way fast. To solve this problem, fuel pods are scattered all over the waterway. Grab them, and you win yourself some time. Miss them and run out of fuel and guess what ... YOU EXPLODE! And to make matters worse (much much worse), you can shoot the fuel pods. So just think about what I said above, there is enemy activity everywhere, yet you really have to be carefull where you shoot, or you will be hitting those fuel pods constantly and you will be treated yet again to the Game Over screen before you know it.

To help you in your quest, a helicopter throws ammo and fuel creates from time to time. But for me, that was just a drop in the ocean.

This game has got all the fun stuff of Buggy Boy, like the jumping over logs, the slopes to slide over, the dark tunnels... and whilst this game is clearly better programmed with silky smooth scrolling and loads of colours on screen, it is the gameplay that has bummed me out a bit. By implementing a very strict time limitation in the form of the fuel system, you actually have to memorize the tracks completely. This is because, way too early in the game, you can not afford to miss one single fuel pod! This turns Live and Let Die, for me, into a completely different type of game compared to Buggy Boy. It removes a lot of the fun factor. There just is no opportunity to 'explore' the tracks more freely, enjoying the jumps and the other arcadey stuff, because if you do, well, it is Game Over! In the end, the replayability of this game is incomparable to Buggy Boy, which I boot up from time to time to this day.

Live and Let Die is not a bad game, it just isn't for me. And I also think it is the least appealing Bond game of the three available. 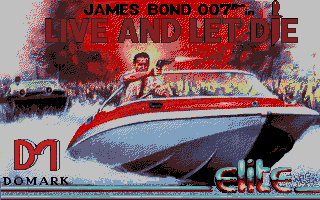 Oh come on, the ST can do much better than this. Admit it, you didn't even try! 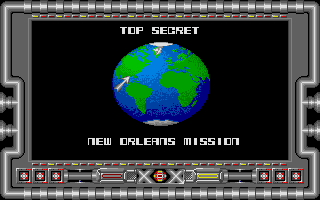 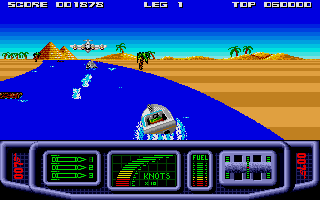 Incoming machine gun fire. Where is that log when you need it? 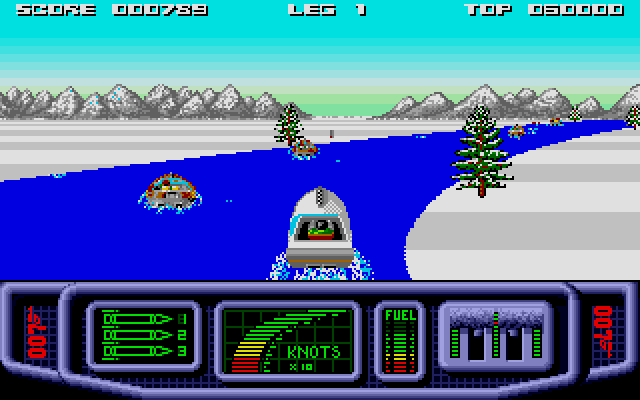 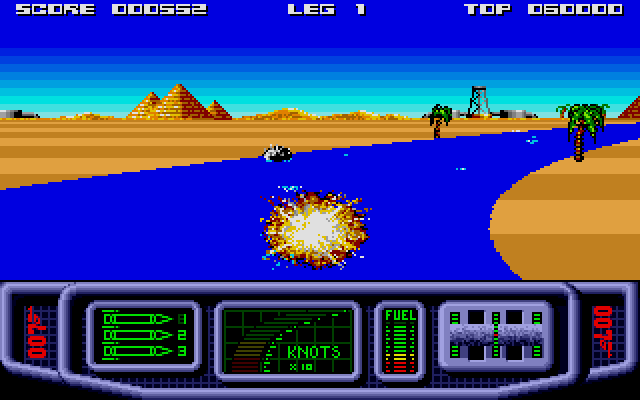 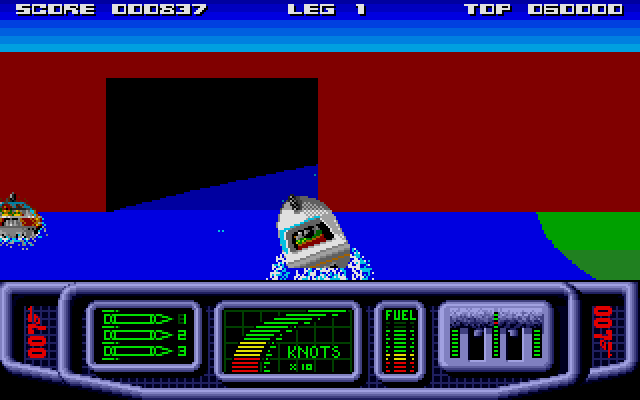 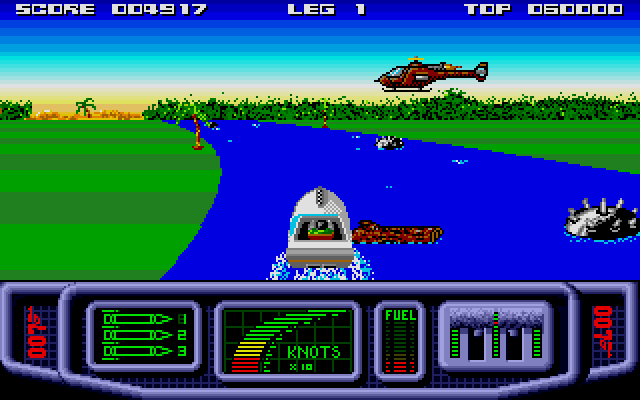 Aaahhh, my saviour. But watch out for that mine... 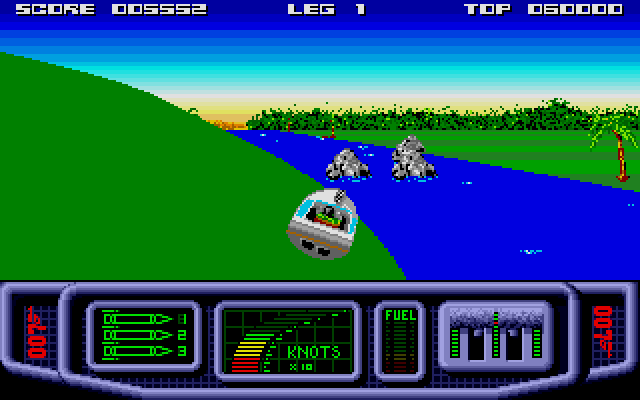 The slopes from Buggy Boy make a great comeback as well.

ST Graveyard
Well, I also missed the connection to Buggy Boy until Stefan pointed the game to me. How lame am I? ;) Thanks for the comment.
January 14, 2019
AtariCrypt
Interesting what you said about the fun factor and exploring. Sadly, interesting. Really good review. I cannot believe I've played this and enjoyed it but never brought it to the Crypt years ago or even seen the Buggy Boy connection. Wow, how lame am I??? :S
January 13, 2019