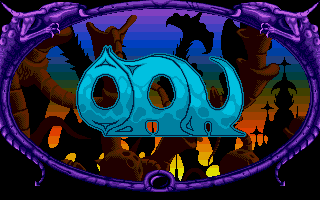 The intro picture...This is where the great atmosphere starts. 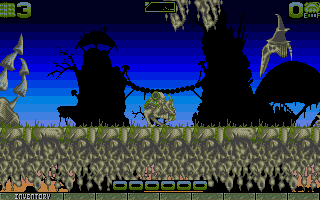 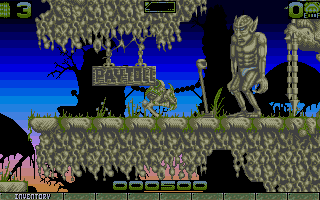 One of the many enemies that you'll encounter on your quest. Don't worry about this one though...His days are over!

I always thought I'd seen about everything on the ST games scene. As usual, I was wrong. I've been playing games on this system since 1986, been buying magazines since 1992, yet had never heard of a game called "Ork". So when I read about it a few weeks ago on the net, I thought I'd check it out. I've been hooked ever since. Playing this little gem every time I found some free time. At the moment I'm completely stuck, still I think I've seen enough to help immortalize this title with a review. It was released by Psygnosis, a company that was responsible for some of the best games on the ST. I was (and still am) impressed by this "hidden treasure"...

The graphics reminded me a lot of the ones seen in the "Shadow of the Beast" games (also released by Psygnosis). This is a good point. I really love the graphical beauty of the game. I like the style that is used. At first it might seem all a bit colorless, even a bit sombre. But that's all part of the great atmosphere. This has to be one of the best platform games in creating a real "outworldish" feeling. Just take a look at the pictures on this page.


This game is filled with strange creatures, and they get weirder as we progress. Landscapes are painted with carcasses. Even the cute "lemmings" make a cameo, only this time they're converted into fierce killers. There is also lots of variation in level design. We start above sea level, with nice blue backgrounds, only to end up in the fiery underworld. Nothing but praise on the graphical part of this review!

Instead of in-game music, an ambient sound sample is constantly looped in the background. This might sound pretty dull to some, but it really worked for me. It helped in creating a nice atmosphere. The sound effects are good. Just press the fire button to make your machine gun roar...It sounds great. Also worth mentioning is the intro and outro music. We get some really great sampled tracks. The outro when your ork gets killed, is actually touching...

Don't be expecting an all around platform game like your used to. This is a bit of a cross between the classical platform genre combined with lots of puzzle elements. You have to find keys and other items to open gates and get further into the game. Searching for these things can sometimes be very frustrating, some of them are very well hidden. But that's the challenge of it all...


To help you complete your quest, your ork is equipped with a machine gun to get rid of all the dangers. You won't be able to go on a killing spree though, cause you have a limited number of rounds to go with, so only shoot when necessary! Later on in the game you will even be able to fly. You'll find little platforms on several places within a level where you can activate your "jetpack". This is very handy for reaching those hard to get places. Remember to turn off the engines occasionally, cause your fuel is limited. You'll also find computer terminals on several places in a level. Here you can save your position, look at level maps...


Controls can really be jerky sometimes. I yelled more then once when I got killed by some of those hordes of flying enemies. You have to get used to it. Ork is a pretty slow game too, don't be expecting a "killing game show" or something like that (the main characters do look alike), this is more of a challenge for the mind. You do get to meet some great enemy bosses though. So do prepare yourself for some great action!


There is one big let down. I haven't been able to complete my quest yet. I'm stuck at the end of level 3. But when the "game over screen" appears, I get the message that I completed 95% of the game. I really hope I'm mistaking here, cause that would make this gaming experience pretty short...And I know when I'll finally pass level 3, I will be hungry for more! (ed. "Ork" has 5 different levels!)

How could I have missed out on this in the first place? It's really addictive. I turned of my computer more than once...enraged! But I just couldn't help starting over every time to try and solve that tough puzzle. A real recomendation for every fan of the genre!