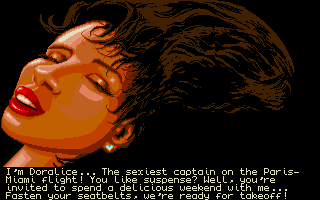 The very humble main character of the game. 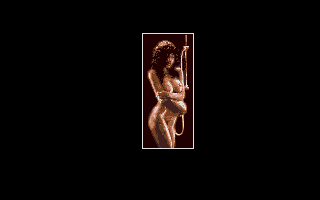 One of the shots from the infamous shower scene. You can take a shower over and over and ... again ;-) 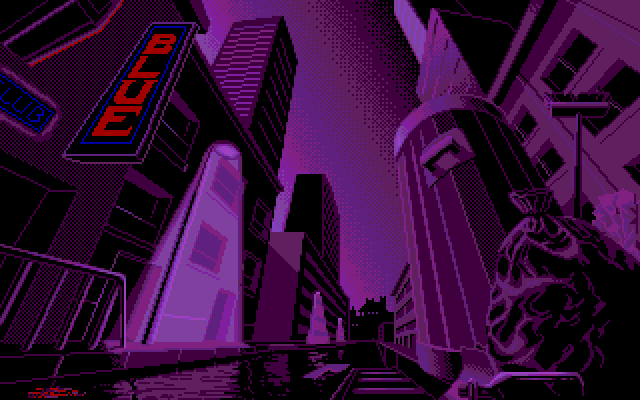 A shot from the moody intro sequence... 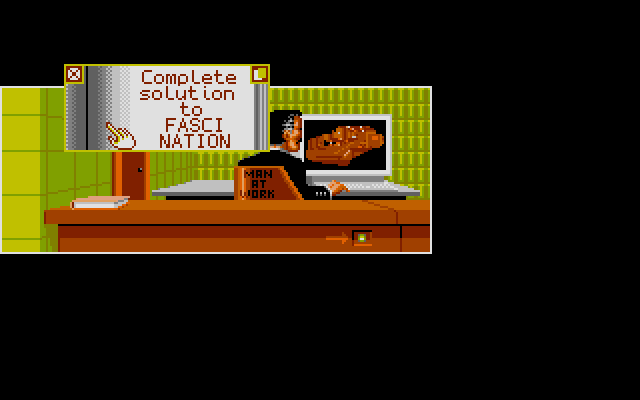 Another nice touch. The office clerk is playing the game Fascination and the walkthrough is lying on the counter :-) 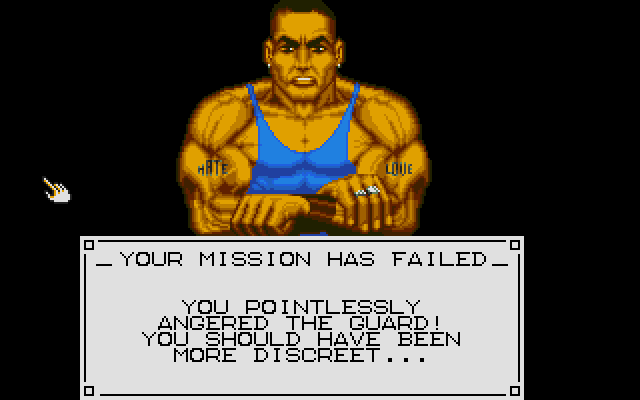 You will be seeing this screen quite a lot. Better get used to it. 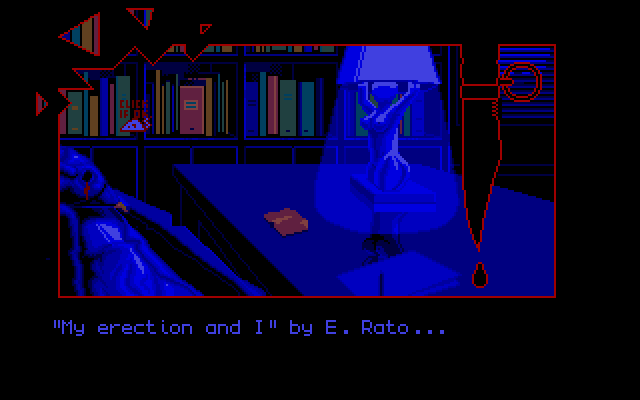 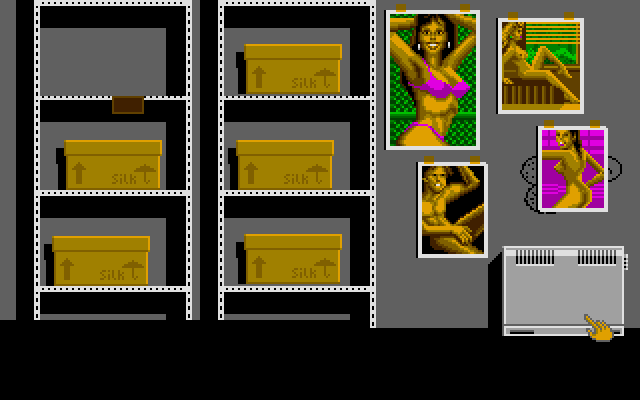 I couldn't help myself, this part made me chuckle. Especially the photo on the bottom right. 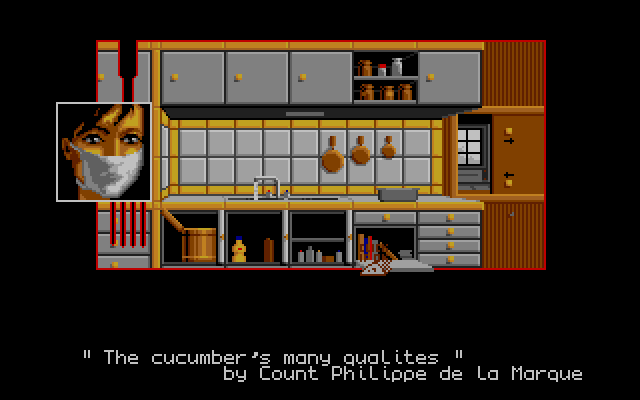 Cooking is not her best quality ... but hey, you can't have it all. 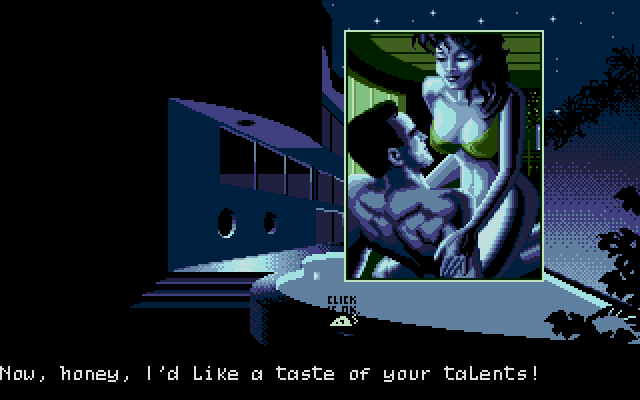 Doralice doing what she does best ... Interrogating! 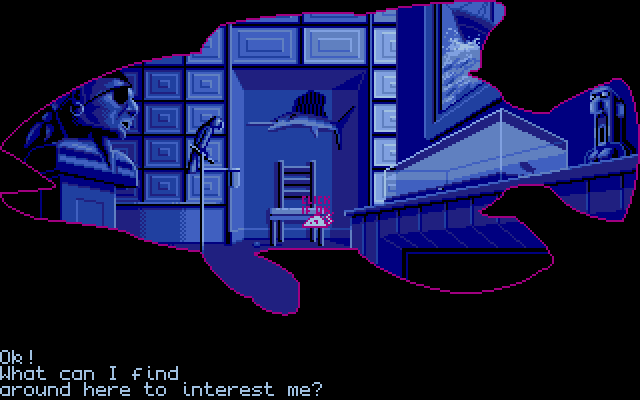 The way the screens are presented in this game is just marvelous... 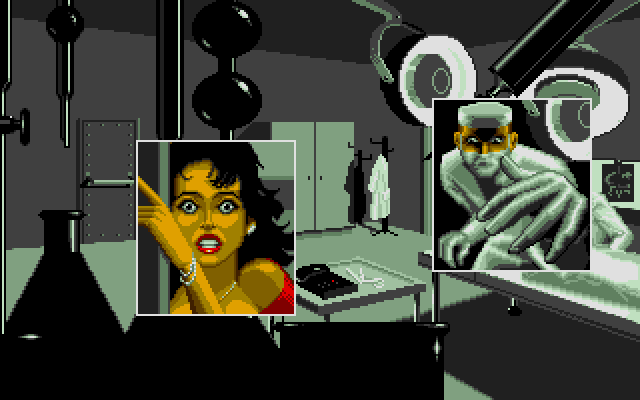 Oh we are in trouble now!

Let me tell you all something. When you are a male in your early teens and the only ‘naughty’ adventures you have played on your ST are the Leisure Suit Larry games (which are great graphic adventures, don’t get me wrong), a game like Fascination IS a big deal!

It is 1992, me and my life long Atari ST buddy (Cheers to you R Hellshrieker!) are 12 years old, and we get our hands on a copy of this game. We didn’t know what to expect. The game starts impressive. A very atmospheric, beautifully drawn intro animation, with very moody sampled music. What is this all about? And just when you thought it couldn’t get any better, almost right from the get go, we are treated with (albeit small) digitized shots of a naked lady in the shower. I can assure you, at that moment, the game was turned into an instant classic! And it left a mark. We never got to experience much more of it though, as our disc was corrupt. Half an hour into the game and it was back to the desktop. What a shame…

Last year I got a boxed copy as a gift from fellow Atari Legend member Brume (one of my most precious Atari ST game possesions!) and to give you an idea what the story is about, and how hilarious the writing actually is, I’m gonna write down some of the parts you can read on the back of the box (including typo’s!) (Make sure you are sitting down for this) :

1) Doralice will be led from the bayside skyscrapers…
2) …to the lingerie boutiques on Coconut Grove… Doralice’s mission during her stop over in Miami: to find aphrodisiac drugs stolen from a laboratory.
3) Doc, the terrible psychopathe works from his underground operating room…
4) …chased by the terrible Doc’s men, she will put her womanly charms to good use in a Cuban nightclub, in Little Havana’s red light district.
5) She is now a prisoner in a mysterious Renaissance Palace on Miami bay

And if that doesn’t make you interested in this game, well than I don’t know what could. It is hilarious. It almost sounds like an Austin Powers flick. And now over 25 years later … I’m loving every bit of it ;-)

But to conclude this introduction I would like to stress out a bit that I really am not a great adventure game player (so keep this in mind). To give you all an idea…At the age of 14 I completed my first adventure game without solution (OK, I admit, I peaked once). It was Loom, from Lucasfilm Games (as it was called back then). Man, I was so proud … Until a few years later I found out the game was actually written for ‘a younger public’. How embarrassing!

I spent lots of hours playing other adventure games: Sierra games, Operation Stealth (which was amazing), Indiana Jones and the Last Crusade (just fantastic) and many more, but I always needed a walkthrough or a hint book … and most of the time fairly early on into the games. The last one in the genre I touched was ‘The Dig’ on PC which was way, way above my league…

So, with that out of the way, let’s delve into this, shall we?

I think Fascination is one of the best looking adventure games on the ST. It has a unique visual style. Take a look at the shots on this page. Each screen is presented within the contours of a certain object. I have never seen this art form before in any other game. The use of color is just vibrant and beautiful, even with only 16 colours at our disposal. And all of this is combined with little bits of animation here and there, along with some digitized photos. On a graphical level this product just oozes quality.

So you play as Doralice, a sexy air hostess. On your flight to Miami, a man collapses on the plane suffering from a stroke. Before breathing his dying breath, he hands over a briefcase containing a ‘dangerous’ substance. Because of this chain of events, you are unwillingly dragged into a murder mystery. It is up to you to find out what is in the case and what it is all about.

We are treated with a very intuitive interface. Each scene in the game is presented from a first person perspective. You move the mouse over the screen, find objects, place them in your inventory or use them on other objects. That is about it. You also have the option to talk to certain people. When there is an opportunity to do this, the cursor changes and you click the person. It is certainly different than what we are used to seeing in Delphine or Lucasfilm Games.

Fascination is a simple adventure game. The puzzles are most of the time pretty straight forward. Also the fact that most of them need to be solved in the same screen, and that it is sometimes impossible to even leave the scene before a puzzle is solved, helps a lot. You don’t need to drag objects with you to solve a puzzle later on in the game. Well, apart from 1 or 2 cases. For example, in the first scene you need to find the vial containing the dangerous substance hidden in the briefcase. The first thing to do is retrieve the lock combination to open the case. Once this is done you find a hairdryer. The hairdryer needs to be plugged into the socket of the hotel room, but it doesn’t fit. You can find a converter in the drawer. Now you are able to connect the hairdryer, turn it on and the vial is yours. There is more stuff to do, but all of this happens on the first screen and you can not leave and continue the adventure until it is all uncovered.

Because of the nature of this game, so called ‘pixel searching’ for objects is unavoidable. You need to have a good eye for little dots now and than. But if there is something to do, the cursor will always light up. It is also possible to get hopelessly stuck, stumbling on a certain dead end. At one point, I managed to miss a $10 bill which was needed later on. There was no way back. So saving regularly is recommended. There are also numerous ways to die (by giving the wrong answers during an interrogation, by pissing off certain characters…). A bit frustrating, but we are all probably used to this by now from Sierra adventure games.

All of these little drawbacks fade away when you read all the cringy dialogue and ‘funny quotes’ in this adventure. So try not to get too uncomfortable *huhum*.

I seriously don’t know what to do with this one. To me Fascination is a classic, mostly because of nostalgic reasons. I still think, on a technical level, it is something to behold on a real ST. There just isn’t anything like it really, and I’m still impressed by it all. I can’t help but love the experience. It’s really not a game for hardcore fans of the genre, it is way to simple for that. Yet I still recommend to play it just for the silliness of it all.

Sadly, I wasn’t able to finish it, not even with a walkthrough. I made it to the second to last screen. I think it took me a bit more than 3 hours to get there. However, the last puzzle is a complete ball buster. Why they did this, is beyond me and a bit of a let down. Too bad, because the ending of it all should be legendary, if I believe the stuff I’m reading on the net.

Check it out for yourself!

Oh, and Coktel Vision released another graphic adventure a bit later on called Ween: The Prophecy. I never played it, but ever since playing Fascination, my interest is piqued. I might give it a go and let you all know.