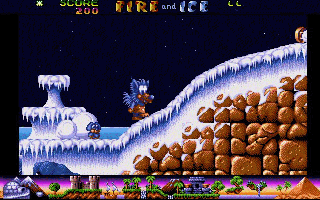 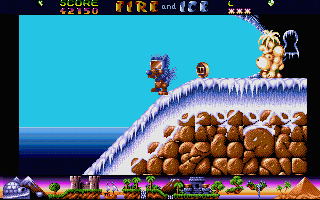 This is the big boss of the first world...This one is still pretty easy to beat...But it takes a while before you freeze this motherf***er... 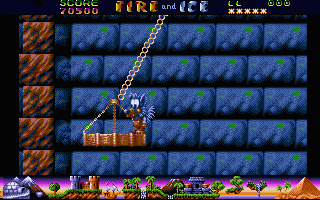 Some serious leaps of faith in this game... 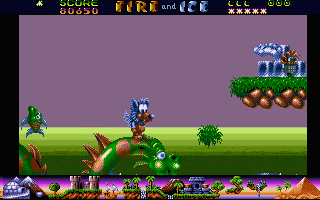 So the Logness monster does exist! 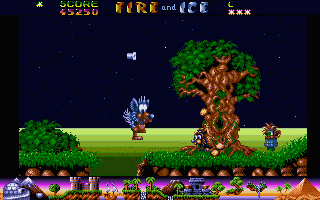 The bits of the keys actually swirl straight at you, you don't have to walk to them to get them.

I think there are more platform games released on the Atari ST then on any other machine from that era. This isn't necessary a negative point, but most of them were actually really dull. Nintendo had "Mario", Sega had "Sonic", why couldn't we have such quality platformers for the ST? Well, we had...The Bitmap Brothers made some great games ("Gods", "Magic Pockets") but that was about it. Until in 1992, Graftgold released "Fire and Ice". This game was hyped in all the magazines as being one of the best platformers ever. And the main character (Cool Coyote) even looked a bit like Sega's "Sonic". But is this game really that good?


The story is the usual. We have this bad guy, Suten, who is after the whole world and it's up to you to save it. You are given some special powers to help you on your quest. Again, this game won't win any awards story wise. But it isn't the tale that is important here!

The graphics are real good. All very nicely detailed. Everything looks really cute. We have some nice parallax scrolling here and there. Something special to mention about this game is the fact that the background switches from daytime to night, everything gets a bit creepier when it's getting dark. This is a great touch and it adds up to the diversity of the graphics. The levels are filled with enemies, these all fit in perfectly with the main theme of each world.

The sound isn't much to write home about. Some nice intro music and some in-game FX. Every world has its own background tune. It's nice, but nothing special quality wise. I do like the theme that's played at the highscore screen...That just sounds sweet :-)

Where do I start. This game is huge. "Fire and Ice" has to be one of the most difficult and frustrating platform games I have ever played. So be patient and take your time, cause you're gonna need it. This game doesn't start of easy, it's tough from the first level to the last one. The game features 6 different worlds, each with it's own strange inhabitants. Every world has a number of levels that have to be completed.


To complete a level, you have to pass the door. And to open it, you need a key. Bits and pieces of this key are hidden within the enemies. It's up to you to find out which ones have such a piece. Therefore you have to destroy them using your powers. To do this, you have to fire ice pellets at them until they're frozen. Then you just have to walk up to them and they'll shatter. The pieces of the keys are differently hidden everytime you play the game. So you can't just kill certain baddies and complete a level.


The game also has a lot of hidden features, which add to the gameplay. Every world has a hidden level. It's up to you to find it. There are other hidden powerups which can help you complete your journey. Eg. hidden bricks filled with extra fire power like the snowflake, which freezes all the enemies on screen, or the ice bomb, which is something like a cute smartbomb. Also, sometimes you'll find a little coyote. This guy mimics all your movements and shoots at the enemies. And if you manage to lead him through the door, you'll get an extra life! You have to complete a level within a certain time, cause after seven (F&I) days, you'll meet your burning end!

This game is awesome. It really is one of the best platform games available for the ST. The fact that it's always different everytime you play it, is a real plus. There are lots of levels for you to explore, secrets to find out about, hidden exits and baddies to kill. Although it can be really frustrating at times (you don't have the option to save the game or to use a password!), it always pays off. Try it!

AtariCrypt
I played this a while back but didn't really "get it". Felt like a lame port to me and was something just beggin to be STe'd for a faster display. Like zool... Anyhow, after reading this I may have judged it too soon. Think I might try it again :)
October 12, 2018