Titus The Fox - To Marrakech and Back

Titus The Fox - To Marrakech and Back 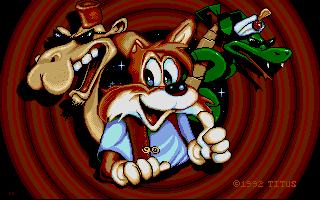 The beautifully detailed intro screen of the game. 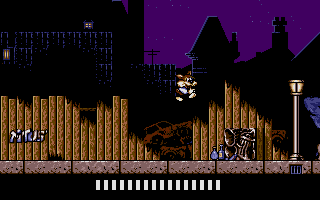 The white dots represent the number of times you can get hit before losing a life. Don't let the amount fool you, this game is hard! 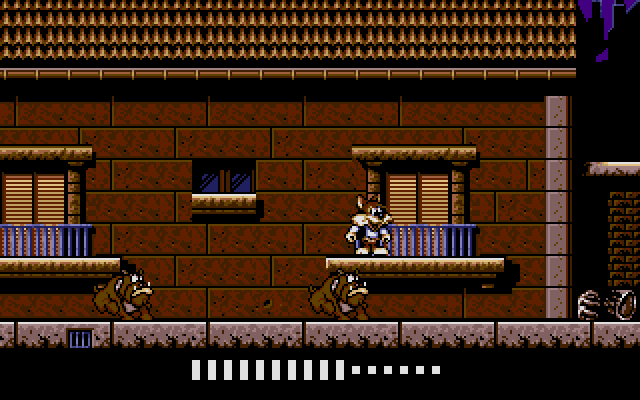 The dogs from that other game make an appearance. 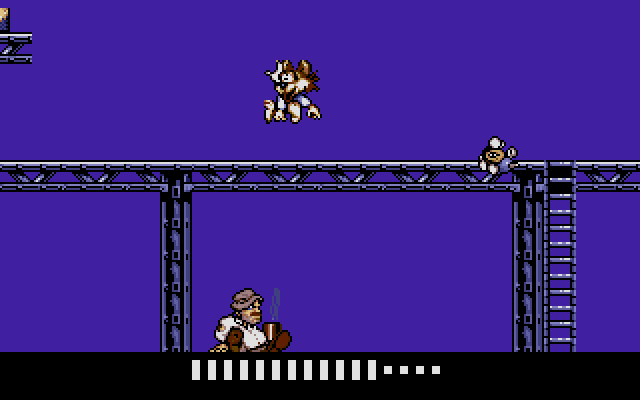 One of the many funny faces our hero makes when getting hit. 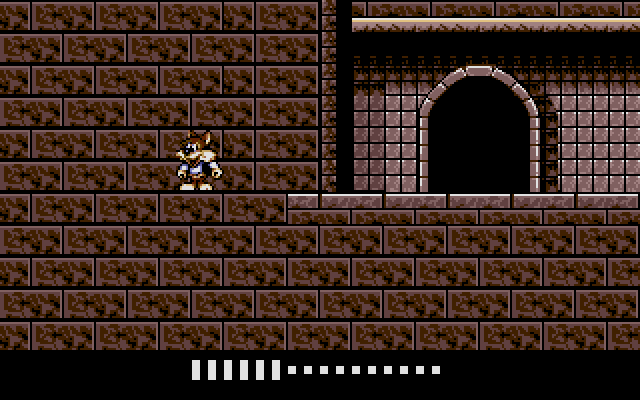 Oh look at this. I have found a secret! 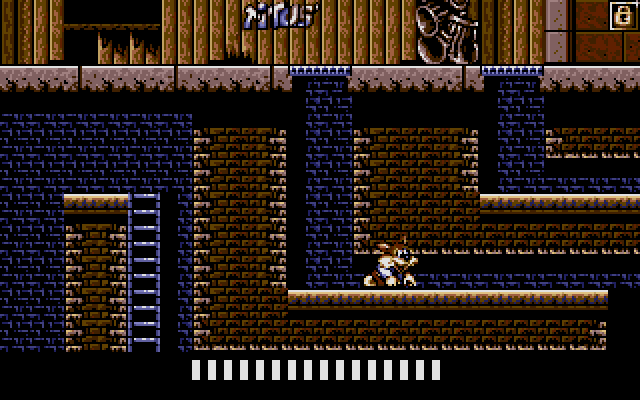 The secret passage through the sewer system... 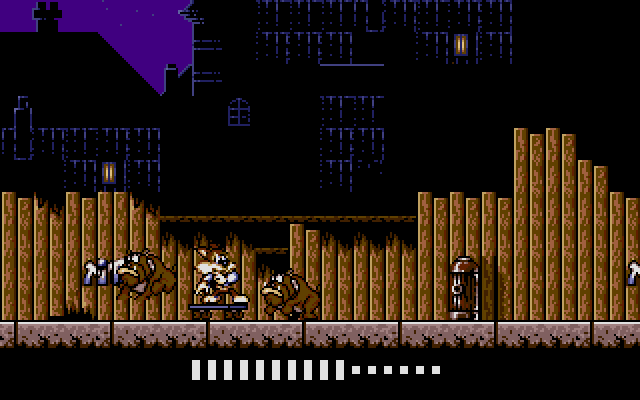 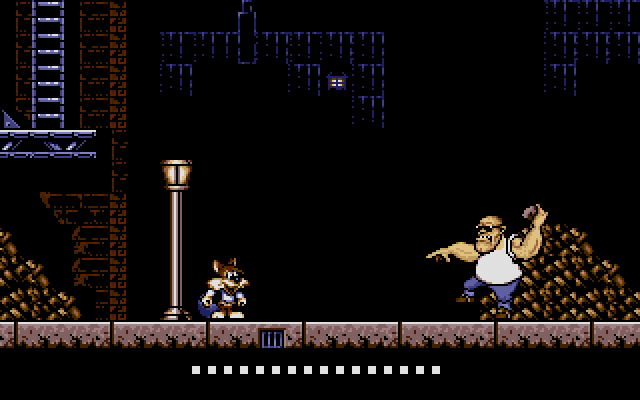 The level 3 boss needs to be defeated by using the bouncing ball. 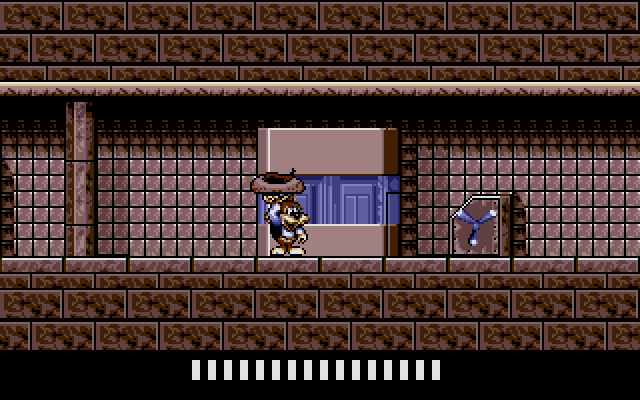 The game completely changes from look when you enter the subway system in level 5.

Since I mentioned this game in my last review of The Blues Brothers, and because I'm on a platforming high, I thought I would give this classic a go. Titus the Fox is a game that has special meaning to me, not because I played it as a kid, on the contrary. Maybe more so because I never had the chance to play it. You see, this game was reviewed in the first gaming magazine I ever bought and at that moment I knew it had my name written all over it. Sadly, I never got my hands on a copy (legal or illegal).

The release of Titus the Fox is also a bit of a confusing one. I remember my friend, who had a 386 PC back in the day, coming up to me during lunchbreak at school, telling me about this new cool platformer he acquired called Moktar. I never heard of it, but decided that, after schoolbell rings, I would go check it out at his home. When I saw the game, I couldn't believe my eyes. This was exactly like the screenshots of Titus the Fox I saw in my magazine. Even the title screen was completely the same apart from the depiction of the main character. And it was kinda fun to play as well...even on a PC ... without soundblaster ... and with keyboard (for crying out loud).

These days we have the internet, and it is easy to find out what is going on here. It seems Titus originally release the game Lagaf': Les Aventure de Moktar - Vol 1: La Zoubida in 1991. This game featured French comedian Lagaf' as the main character. But since he wasn't known outside of France, the game was redesigned a bit. Titus added their own mascotte 'The Fox' as the main hero, renamed the game 'Titus the Fox : From Marakkech and Back" and re-released it a year later for the IBM PC, Amiga and Atari ST.

...In the end, I do wonder which game was made first ... The Blues Brothers or Moktar? ... But I guess it doesn't matter.

One thing is for sure, they really had some talented graphic artists over at Titus. Again, this game features beautiful, cartoony sprites with some nice animation (the faces the little fox makes when he is hit or dies are just funny). And as in great Titus tradition, there is also some recycling going on. For example, the bulldogs which you encounter in the first level are ripped straight out of level 5 of the Blues Brothers (or the other way around). But hell, no problem, it all looks great. I have to say, I was a bit disappointed with the colorpalette at first. I'm not the biggest fan of the brownish tone in which this game seems completely engulfed. But this is solved later on as there seems to be a lot of variety in level design after a while. This game features the notorious flipscreen engine, as in all Titus platformers, which is something you have to get used to. There are also some minor issues with slow downs on some screens, as enemy activity sometimes goes through the roof! (more on that later)

Every level features its own tune. Technically nothing special, but there are a lot of them, so the diversity is really appreciated. Again, these YM tracks stick in your head and I couldn't help myself humming some of them later on during the day. Sound effects are ok and I did notice the use of samples as well, eg. when you use the bouncing ball during the boss finale of level 3. Which is just ... cool.

At first, this game really is a mixed bag. Not comparing it to The Blues Brothers seems impossible for me. Titus the fox starts of as a much harder game (which is ok), even a bit unfair. My first sessions were a really frustrating experience as I was expecting more of the same, great, easy going, platforming fun as in Blues Brothers. Going through level 1 is a complete no-brainer, but the level of difficulty rises exponentially. When you enter level 2, the screen is crawling with baddies (slow down becomes more apparant) and there are very few objects to throw or defend you with, giving this game a completely unbalanced feeling.

However, you have to learn the game mechanics. You see, there is more to it than just picking up the scarcely spread objects and throw them at enemies. In some situations You might want to sneak up on one, grab him and throw him of screen or use him to play a game of bowling, hitting as much of his buddies as possible (STRIKE!!). And even though this technique really can be a hit or miss, this changes the whole experience. Also, be carefull what you throw away, because in most cases, the object will be gone. Think about it, you can also replace an object and climb on it to reach other areas. And this brings us straight to the second part which differentiate this game from other Titus platformers...the puzzle element. To go from point A to point B, you really need to use your brain sometimes. It is not an adventure game, but I did get stuck from time to time, needing to go back and re-think my path. In the end, this makes the game all the more interesting.

There are some cliché's implemented as well, to spice up the fun factor. Certain objects will change the pace of the game completely. Already in level 2 you are able to ride a skateboard (if you manage to reach it) which makes you invincible. There are more of these things, like a bouncing ball, giving you the chance to jump sky high and later on in the game you are treated with a 'magic carpet' ride (just awesome!). And remember you can pick up these items and drag them along with you as long as you want! Don't be amazed if you stumble upon a hidden room. The game is filled with surprices (good and bad) and secret passages for you to discover (Just remember to press 'down' when you want to open a door!). And finally, as in true platform game tradition, we are treated with some (very nicely detailed) end of level bosses.

Titus the fox is a hard game, very unforgiving at times. But once you manage to complete a level, it rewards you with a feeling of great satisfaction. And luckily, a password system is implemented, so you don't have to start over completely when you have run out of extra lives. The flipscreen engine will be the cause of some frustration. However, it can work in your advantage as well. An end of level boss will not see you when the screen flips and this makes finishing some of them a breeze. I really doubt this is a case of 'Works as designed'! Sadly, the awesome 2 player mode is missing. This would have been the icing on the cake. Maybe another time.

So, is Titus the Fox as good a game as The Blues Brothers? No, in my opinion not. The Blues Brothers has better level design and just plays better and is more fun overall. Does this make it a bad game? Definitely not. If you are looking for a good looking, fun platformer and are not afraid of a challenge, this game is something for you. Even though Titus the fox might not be of Bitmap Brothers quality, this is definitely the second best Titus platformer I have played on the ST, and it is a great all-rounder for the system!