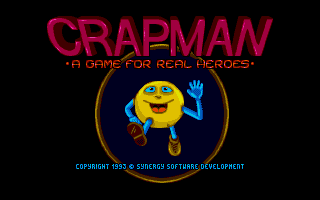 Here is our main hero. 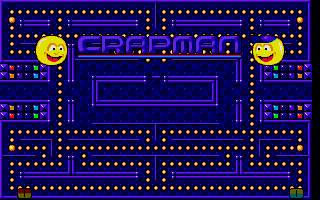 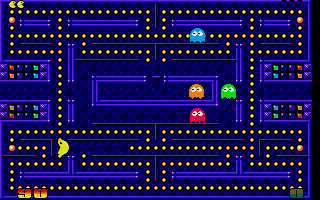 The first maze is a breeze. 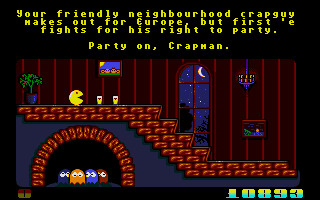 One of the many funny cut scenes of the game. 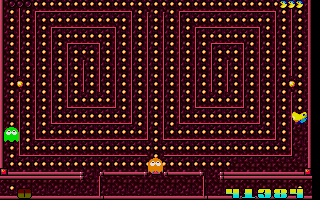 It is starting to get difficult now. 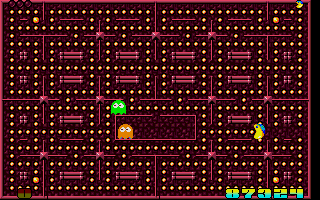 What do you think of my cool cap, he? 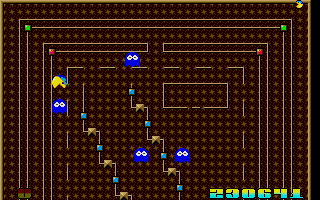 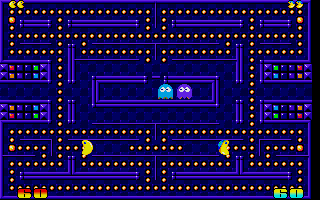 2 player action. It is all possible in this game!

Well, we all know the story by now, I guess. Pacman was conceived by Toru Iwatani while he was eating a pizza. When he looked at his plate, after he had eaten a slice of his pizza, he came up with the idea of creating the main circular and yellow character we all know and love today. That was in 1979. Once the game was released for the American public in 1981 by Midway, it all became a major hype. Pacman was everywhere.

The ST had its own share of Pacman clones. Some good, some so bad they weren't worth their disk space. Luckily for us, Crapman belongs to the first group of clones, even if the title of the game might suggest else.

This version was created by a talented Dutch demo crew called Synergy, and to me, remains the ultimate Pacman experience on any system to this day.

The graphics look absolutely top notch. The game opens with a beautiful intro screen and from than on, it stays a feast to the eyes. From the nicely drawn menu screens to the actual mazes, from the cutscenes to the highscore table! Everything is very detailed and colorfull, and I still can't believe this wasn't a commercial release to begin with. Some of the mazes actually take more than one screen, and everything scrolls silky smooth accross the screen. The creators have paid attention to the smallest of details. For example, the score is placed within the actual game screen. When your hero move underneath the points, the digits get transparent, so you still see where you are going. Superbly executed!

This game is a very good example of what can be done with the YM soundchip. This thing produces great tunes, as long as you know what you are doing. Joris Maarten de Man is one of my favorite composers, just for this game. Each maze comes with its own tune, and they all sound super cool. It doesn't get any better than this!

You are Crapman, and you are looking for love! And to find your loved one, you'll be travelling all over Europe. There really isn't much story to the game, ofcourse, but what did you expect. Its is not important here. We all know the rules by now. The game features about 50 different mazes for you to complete. Another nice touch are the powerups which appear from time to time. There are extra lives, extra speed ... Things like that. Grab the fruits for extra bonus points. There are ofcourse the powerpills which will scare the heck out of the ghosts.

Crapman features a very cool 2 player mode. You and a friend can play simultaniously to complete a maze. This will make for some great co-op play. Fun guaranteed.

Another option which is definitely worth a mention are the language options. Choose a type of language and everything from the menu's, to the game guide to the actual in game comments are translated into the chosen language! Top notch work!

There seems to be more than 1 team called Synergy, but beware, the one you are looking for is the team which consist of some great Dutch coders. Crapman stays my personal favorite Pacman clone. It is always fun to play a quick game of Wacka Wacka. And if you are a fan of the genre, you can't afford to miss this one! Be sure about that!!

ST Graveyard
It has been over 13 years since I discovered Crapman and wrote this review (seems almost surreal). I played it again today and just couldn't stop. My daughter was watching. This thing is just pure perfection, the graphics, the gameplay and those tunes ... oh those tunes. Thank you Synergy!
August 19, 2018