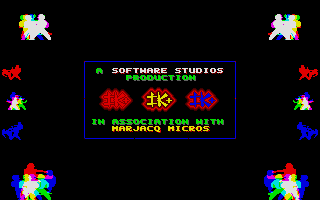 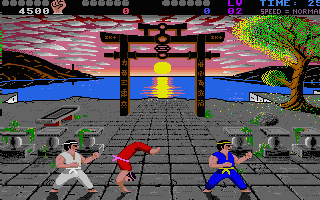 IK+ is the only game to feature 3 fighters simultaneously in a match... 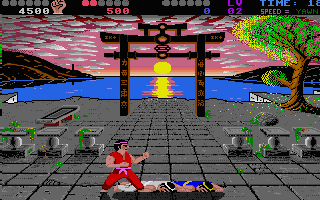 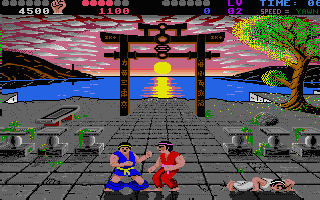 And all of a sudden, this harmless Karate game has turned into a cyber orgie :-) 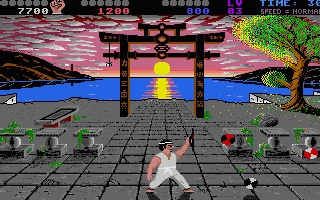 The first bonus round is a lot of fun... 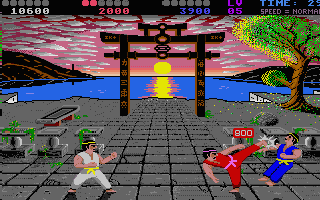 Once you've crossed the 10 000 points barrier you'll get the yellow belt. 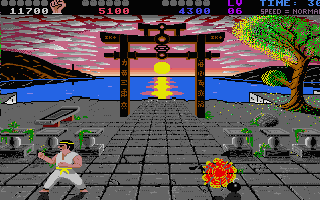 Kick the bombs BEFORE they blow...Jezus!

International Karate Plus (IK+) is one of the best beat 'em ups ever. Period. Even by today's standards. This game is the follow up to the legendary "International Karate". Although the first game was never actually released on the ST, we did get to see an updated version by the name "World Karate Championship" (System 3, 1986). This is one of those games I used to play all the time with friends. And since I discovered ST Emulation, I still start it up now and then. They just don't make games like these anymore...

Very nice, colorful graphics combined with some great animation makes it a winner in this section. The fighters move fluently in front of the animated background. If you watch closely, you'll see little worms crawl over the screen, fish jump out of the water...It's all very well done. Even pacman makes a little cameo in this game!

Fantastic sound effects fill the room. Kick your opponent in the nuts and the sound will actually make you cringe! An oriental type of music in the background completes the gaming experience. It will never bore you...

Why is IK+ so much better than other games in it's genre? First of all, 3 fighters participate in a match instead of the regular one on one fights. So it's your job to try and stay in the game. To do this, you have to score more than your opponents. Each fighter has 6 life points. When you hit your opponent, he will loose 1 or 2 points, depending on the move that has been executed. The player that has the least of these points when the 30 sec. time limit is over, is out. If this happens to you, the game is over and you have to start again.


Secondly, we have the fantastic gameplay. The controls are very smooth. We don't have to push 5 button combination to execute a move. You're able to perform any of the 16 moves available by just pushing the fire button and wiggling the stick in the preferred direction. It all works like a charm. The game gets gradually tougher and once you scored enough points to end up with a black belt, all hell brakes loose.


Between fights, you'll also enter one of the two bonus rounds. In the first round you have to deflect incoming balls with a metallic plate. It's really fun, but nerve wrecking. During the other round you have to kick live bombs off of the screen before they explode in your face. If you manage to survive, you'll be rewarded with 5000 points. If you're really good, and are able to kick away every bomb, you'll get 20 000 points!


But the real fun starts when another player enters the game. You can both take on the computer controlled player and stay in or you can press the infamous "t" button to drop your friends trouser and give him a good spanking.

This is my all time favorite. I can't recommend it enough. Once you've played it, you're hooked. And when another friend joins, it's just awesome fun!