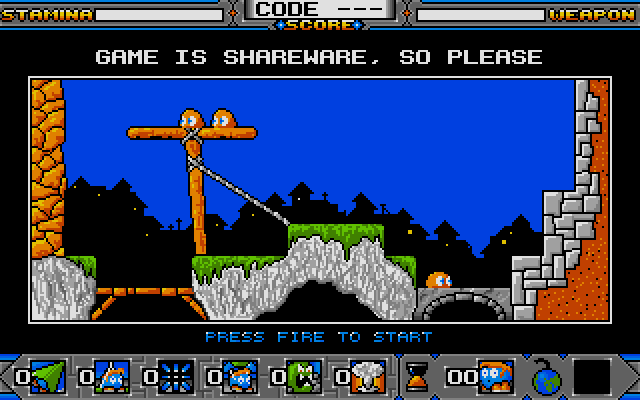 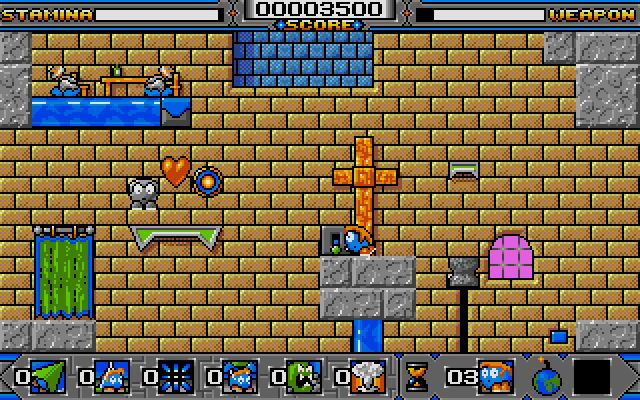 Already in level 1 I found a secret. Use the levers to uncover hidden treasure! 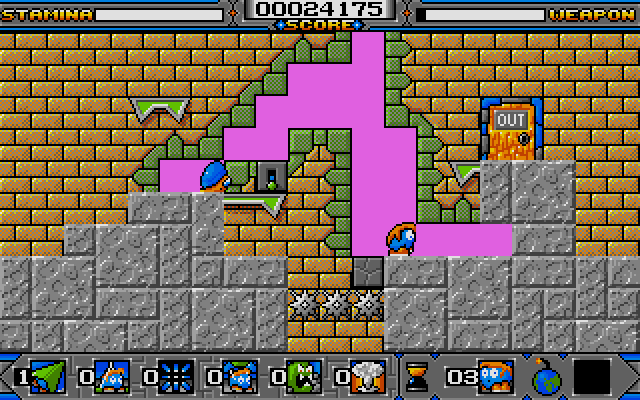 Doors will lead you to different parts of the level. 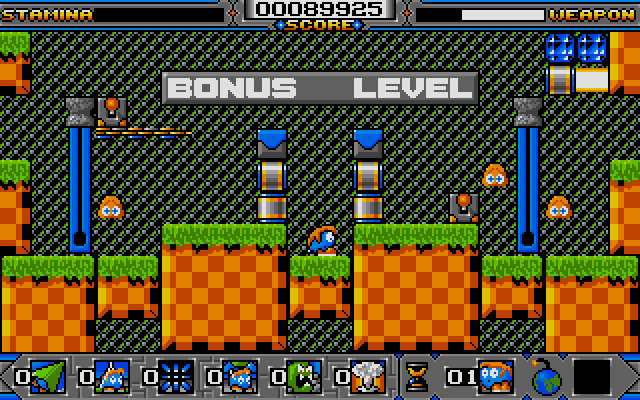 The bonus level. Pull the levers when a baddie is crawling at the right spot then have it squished... 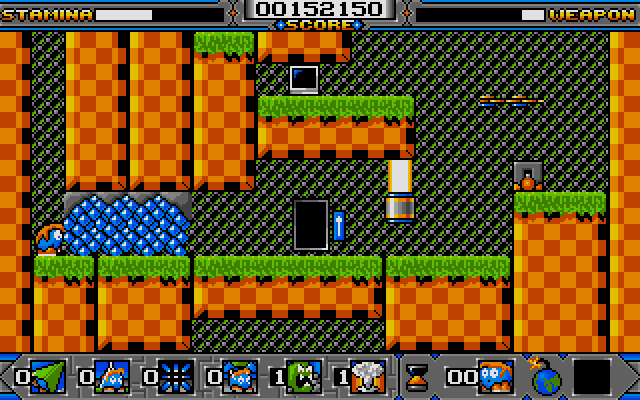 Use the 'Wall Eater' to bite your way through the blue wall... 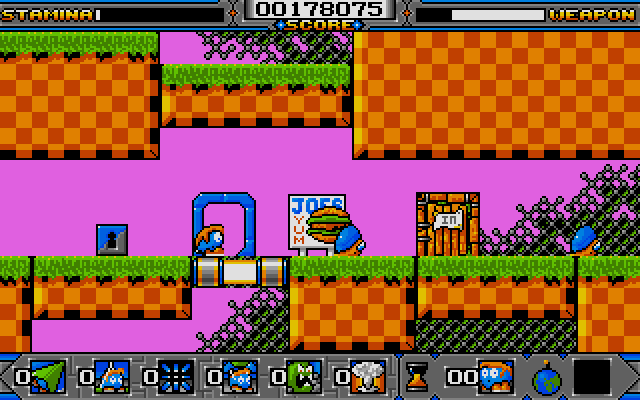 These snails cannot be killed. Avoiding them is key! 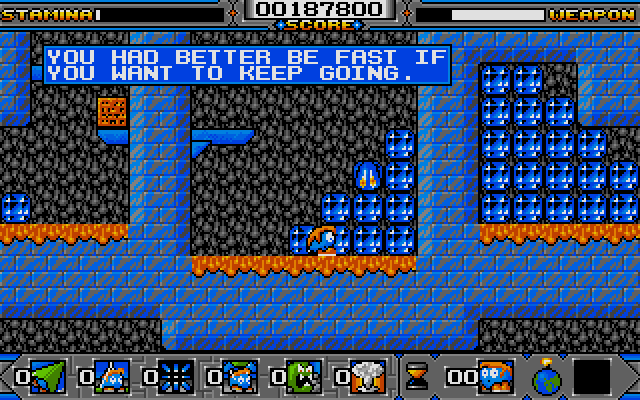 The year is 1993. Already pretty late in the ST's lifespan. Companies like Sierra or Lucasarts abandoned the format, and EA was just about to give up. Sure, we still had some great releases like The Chaos Engine from the mighty Bitmaps, and after a big petition Microprose finally gave in and released Civilization, but still, for most people the demise of the ST was apparent.

Not for me however. I was 13 years old, and in January 1993 I bought my very first ST Format magazine. And what an issue it was. Play the 50 best games on your ST ... I must have read those pages a dozen times. But more importantly, it came with a full game. And that game was, yes you guessed it, Ozone!

Ozone is a game with an interesting history. Released in 1989, creator Nick Harper had always envisioned to make this a full commercial game. Everything seemed right. The game got a lot of attention from distributors, however, once they learned Ozone was created using STOS, all of them backed out one after the other. So in the end it was decided to release the game as shareware. It wasn't until January 1992 that it got reviewed in ST Format (and rewarded with an STF Gold award) and finally in 1993 it was put on the coverdisk of that same magazine. Back then, my personal thoughts on Ozone were ... well ... I played it quite a bit, but I was more into the vast array of shooters and action platform games the ST had to offer. Young and stupid, I guess, because when you really give it a closer look, there is a lot to love about this game.

Colourful, cute and slick ... 3 simple words to describe this platformer. Everything in the game is all very nicely detailed, with rich and vibrant colors. There are loads of variation in level design and it all runs at a constant 15 frames per second. This might not seem silky smooth, but it does the trick. Ozone is not only a great looking STOS game, this is a great looking platformer all around and could easily measure up with its commercial counterparts.

One YM chiptune and no sound effects. You heard it right, this is a bit of a let down to be honest. The tune is not bad, but you can imagine if it is the only thing you hear in the complete game, it gets annoying after a while. I wonder why it was done like this, because a little bit of effort would have made all the difference...

When first booting up Ozone, it reminded me of the classic Starquake. Ozone also features large, upwards levels but there is no scrolling to the left or right. When the main hero leaves the screen from one side, he will return on the other side and vice versa. There are, however, doors that open up a completely different part of the level, adding more complexity and variation.

Ozone is a puzzle platformer in its purest form, and it can become a real brain cracker sometimes. You don't need to go all blasting and platform jumping your way through a level. Thought and perseverance is required here. Our main blue blob does have the ability to shoot (with a limited number of bullets) but not all beasties can be killed.

There are 13 levels for you to complete, excluding a few bonus rounds. The first few levels are a breeze. Go up, jump a platform and off you go through the exit. The fun really starts when you need to find keys to unlock doors or levers to uncover certain parts in levels.

You also have 6 special powers, that can be found throughout the game which need to be used wisely. There are things like the hang glider, used to float to otherwise unreachable parts. A rocket pack does the same thing but vertically. There is also a teleporter ... and the funniest thing, the wall eater. This little critter will bite his way through stone for you.

Sometimes you will notice a computer screen or a book. Moving in front of these items will give you a hint on how to complete the level. You have a stamina meter which is drained (often too quickly!) when getting into contact with baddies (the wasps are a real pain in the butt and need to be shot instantly).

Pick up the heart items to fill the stamina meter and if you are lucky enough, you might find an extra life. As already mentioned, there are some bonus levels in which you need to complete a mission within a certain amount of time. These vary from collecting as many gems as possible, squishing enemy blobs by pulling levers and more of that stuff ...

Once you have completed all levels, it might be rewarding to start all over again, as this game is filled to the brim with hidden secrets, adding quite a bit of replay value.

Ozone clearly is a labour of love. Nick Harper knew what he was doing. This must have been the first game that really showed what could be done with STOS, and it is still (one of) the best example(s). It definitely isn't for everyone. 13 levels might not seem like much, but you have to think and take your time in this one. It does get frustrating sometimes but that is all part of the experience. A highly polished game and very much recommended for fans of the genre.

I wonder if Nick ever made some money with this release. It is well deserved. The fact that it got a sequel is hopeful. I definitely need to check out Ozone 2 soon.