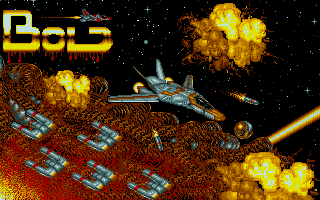 The nice title screen, featuring the fighter from the first version of BOLD. 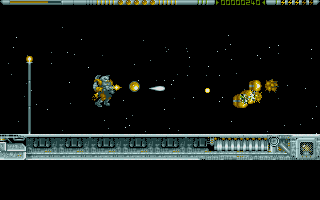 You start the game in GOLEM form. 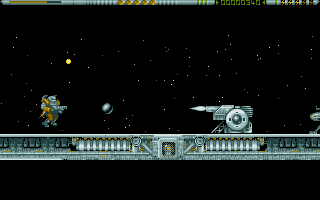 Watch out for some of the scenery ... 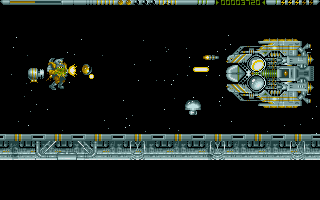 The first end of level boss. This one is a breeze, as long as you have a few smart bombs left! 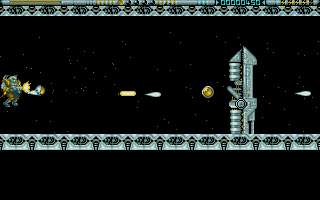 Transform into the spacecraft to make it past that obstacle... 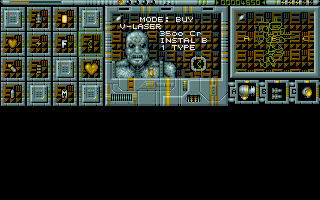 The shopkeeper, where have we seen this before? 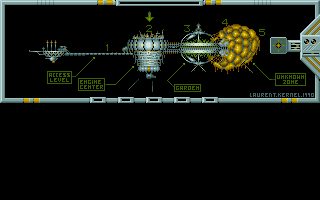 Time for the next round!

2004 seems to be a great year for ST releases. In the first half of the year, the fantastic game "Roger" took the scene by surprise, released by talented French author Tobe. Little did we all now there was more on the horizon.

A few weeks later another completely new game popped up from nowhere, called "Bold". This shooter, released to the public by Laurent Kermel, was an unfinished product dated back from 1989. After playing it for a few seconds, one question comes to mind. Why was this never ever released commercially? The game "Bold" is inspired by so many great arcade shooters we all come to love (and which are sadly not being made anymore) like R-Type and Side Arms.

The story is about a space station orbiting around Mars. Contact with Earth is suddenly lost, and soon after, disturbing footage from aboard the station is transmitted and received on the blue planet. It seems the station is infested by an unknown alien life form. Since you are an elite fighter, called "Bold", it is your job to get rid of all the nasty aliens.

After a static intro pic and some atmospheric sampled music, the classic side scrolling begins ... lets take a closer look.

It all looks like a commercial game, I can assure you. The graphics look pretty slick, and I have definitely seen worse on my STe. All the characters are richly detailed. The transformation animation of the main hero from a humanoid to a space craft is nicely
done. Everyone of the five levels has got its own color palette.


Another note are the end of level bosses, they look really good. Some of the things witnessed on screen eg. some of the weapon enhancements, are definitely inspired by games like Xenon 2. The scrolling is very slick, especially considering the ST's horizontal scrolling capabilities.

Well, this is the lower part of the game. It all starts with a cool, looping sound sample when we boot up the game. In game sounds are good, but there could have been some more variety. Most of the time only the sound of the guns and the exploding of the enemy can be heard as sadly, there's no in-game music. What there is to be heard, is quite good.

The space station in "Bold" is divided into five different levels, and as in true shooter tradition, each level is guarded by an end-of-level boss creature. Not only can you be killed by all the aliens flying on screen, you'll also have to watch out for certain obstacles. Sometimes it is possible to remove certain obstacles by shooting them, so you can avoid them.

When talking about manoeuvering, another nifty feature comes to mind. You have the ability to morph your craft into 2 forms.

Firstly there is the humanoid form (GOLEM). In this form, you move less quickly, are big and lump, but you have got a stronger shield and heavier fire power.

Secondly, there is the space craft form (WASP), which makes you weaker to incoming firepower, but on the other hand faster and more maneuverable. This looks really cool, and I bet it was a nod to the classic "Xenon".

During the game, you have to shoot at everything that moves. The more you destroy, the more credits you earn, which you can use in the shop you enter after each round. This shop, and its shop keeper, look strikingly familiar to the one seen in "Xenon 2". In the shop you can enhance your ship with loads of cool weaponry, or you could buy extra health. Its all up to you, and how much you can afford. You also have a certain amount of smart bombs at your disposal.

Now here is something different. "Bold" is completely controlled by mouse. "Mouse", you say, "that has gotta be difficult, right?" . Definitely not. The movements are very accurate and the ships responds very fast to the mouse movement. you use the left key to shoot, the right key to morph and finally the space bar for the ever destructive smart bomb. That's all there is to it.

Sadly, I was unable to get the game running on my real ST. This was a bit of a bummer, as this is mostly the place where the most fun starts. But the game runs fine on an emulator.

I still don't understand why this game was never released commercially, I bet it would have been a success. Personally I think "Bold" can easily be compared to "R-Type". It all looks so professional for a shareware game. I had a lot of fun playing it. It might all be a bit fast and frantic at start, and you have to get used to the controls, but once you're there, you will have a hunger for more when you have completed all 5 levels of the game.

You can find more info on Laurent's website. And as you can see, there is more unfinished ST projects on his site - let's hope it all sees the light of day ...