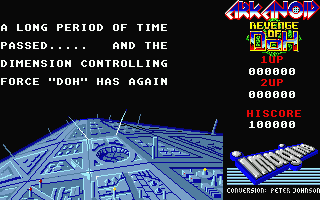 Well, I'm not gonna start with the background story, it's just to dull to be true! 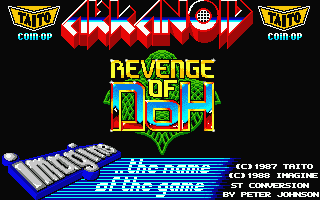 The marvelous Peter Johnson ... Who else? 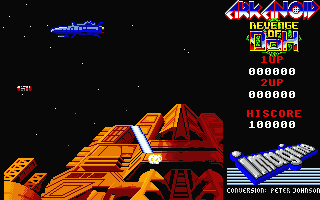 A shot from the short intro of the game! 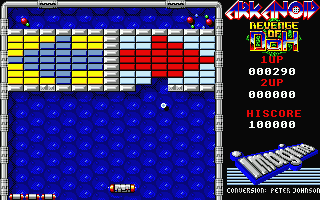 The first level is a breeze...

Arkanoid was a very big hit in the arcades during the second half of the 80's. This game gave new life to the breakout genre by introducing some cool power-ups. So it doesn't really come as a surprise that a sequel was produced. With better graphics and sound, more levels and even more power-ups! "Doh" is back, and it's your job to get rid of him...again! But is it really worth bothering?

This is a very good conversion of the original arcade game. The graphics are slightly better than its predecessor, with lots of bright colors and fluent animation!

Well, there is not much to say here. The sound FX are good and the music sounds fine. I do miss the original track from Galway, but hey...

We all know the drill by now, so I'm not going to explain the goal of the game. Just hit those bricks and progress. Let me start by saying that Arkanoid 2 is difficult...VERY difficult! You will need some serious practice to complete this game.


So, what new features can you expect? Let's start with the power-ups. We've got the classic sticky bat, expanded bat, laser bat...from the first game. But there are new, innovative powers to collect. Like the powerball, which passes through a wall of bricks, or the three way splitter. This power always splits the ball into three, so you're constantly playing with three balls. Other cool powers are the twin bat, and the ghost bat (enlarging your bat a great deal). It's also possible to make combinations eg. grab a multiball bonus, and then a powerball bonus for a power-multiball! Finally, we have the extra life power-up, or the next level power...But these are rare gems!


But there is a downside to all of this. Like in the first game, there are enemies, crawling down the screen. Hit them, and your ball shoots in random direction! There are indestructible bricks, bricks that need to be hit more than once, reappearing bricks and even bouncing bricks! Your ball gets faster as time passes, and it goes faster quickly. You can try and catch the yellow bonus to solve this problem, but these are painstakingly sparse!


Hey, where are you going? I'm not finished yet! There is more...Once all bricks are destroyed you have the option of taking 2 exits, creating even more levels for you to complete! After a couple of levels you'll have to destroy the mid-game boss. Big things with tentacles, spitting all kinds of badness at you! Once you've completed more then 30 levels in a row, you'll encounter "Doh" himself! He's a real though one so...Hit him hard!


As in the first game, you control the bat with the mouse. This works perfectly. Controls are very accurate and you'll soon get the hang of it, hitting the ball in that perfect angle!

Although the genre has been milked to death, you really gotta try Arkanoid 2. It's even better than its predecessor. The power-ups are a load of fun! This is without a doubt the best break-out game for the Atari ST...But it's also the most difficult! Draw!

AtariCrypt
Sometimes I wonder why I bother. You're so right that this game is hard and I need the reactions of a teenager so I better keep practising before I show myself up with a gaming video. Well, I probably will anyhow... Ha!