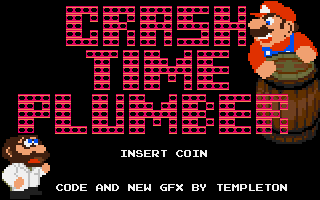 Mario vs Dr. Floyd. Who would you put your money on? 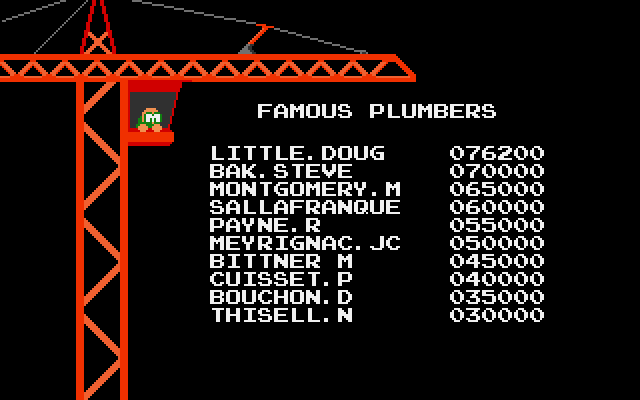 The hall of fame 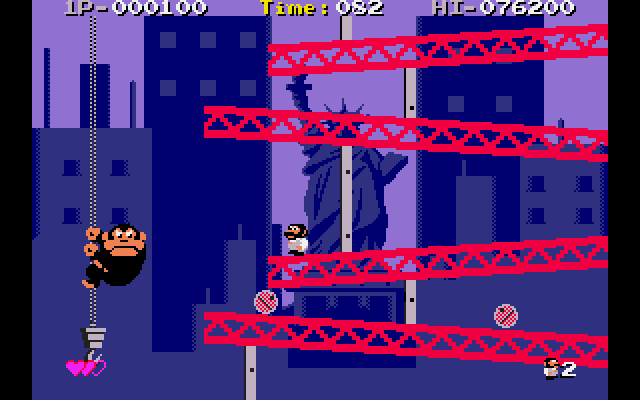 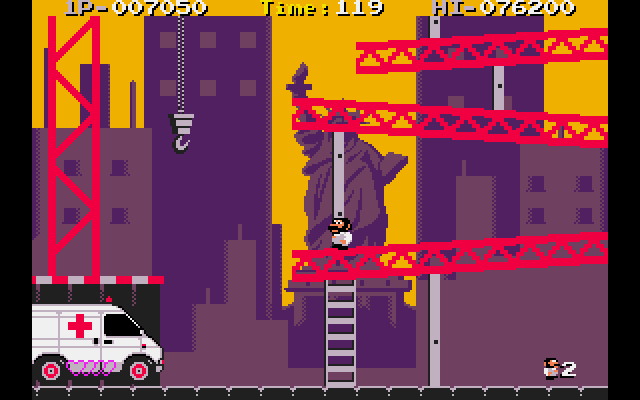 No Donkey Kong in sight yet ... 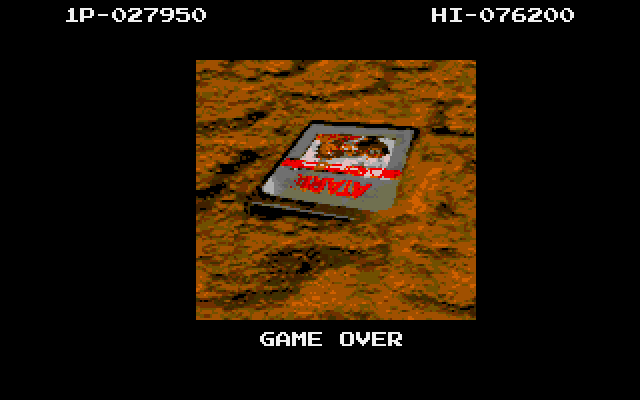 The ET landfill story was not a hoax after all! 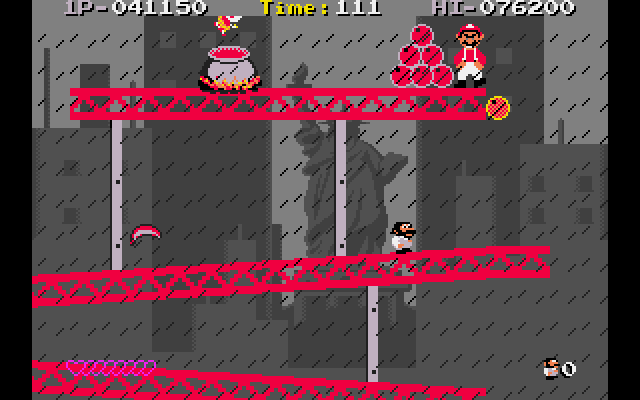 Watch out for that banana. Level 6 is where the mayhem really starts! 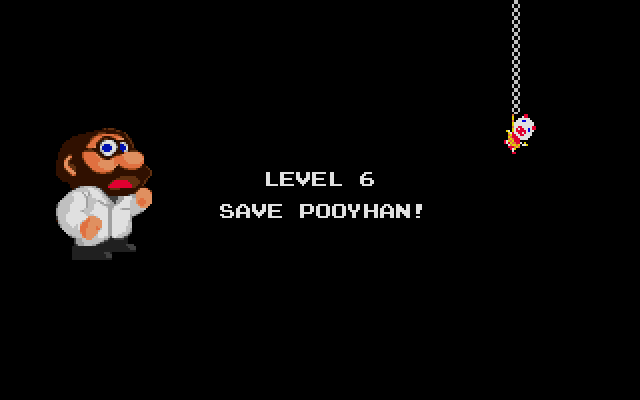 One of the many cutscenes

As an 80's kid, I grew up with game characters like Donkey Kong and Mario. And even though we had an Atari ST (luckily), I still played my share of these old school single screen platformers. My first contact with Donkey Kong was on one of those Game & Watch handhelds by Nintendo. Man, this was so addictive. I also remember vividly playing classic Mario Bros (and I'm not talking about the NES platform game released in 1985) on the Commodore 64 in 2 player mode. What a blast we had. And even though the ST had some great single screen platformers like Bubble Bobble, Rodland, Bomb Jack ... I don't think Donkey Kong or Mario were released in any form on the ST ... Not until 2016 ... Or something like it at least ...

But wait a minute, we are not just there yet... A few years ago I watched the documentary The King of Kong (If you haven't seen this and don't know what I'm talking about, go watch it now, it is highly recommended) and my interest in the game got piqued again. So I started playing it using Mame and I was instantly hooked again. 2 years ago, I first heard about Crash Time Plumber thanks to our good friend Steve over at Atari Crypt. Still, I was in the midst of building this site, so I missed out on it again. Up until 2 days ago ;-)

Crash Time Plumber is another conversion of a Dr. Floyd game (of Gamopat fame). An extremely well done release for the STe by Cerebral Vortex. Just check out the graphics of the original PC release and compare it to this one, and it is very clear that developer Templeton knows what he doing. I played my first Vortex game last January, the bullet hell shooter Supa Zazai Da and I loved every bit of it.

This game, again, is based on a little crazy story. You play as Dr. Floyd and you need to go back in time, 1983 to be precise, to prevent the infamous video game crash. However, this task may not be as easy as it seems, as Mario and Donkey Kong joined forces and kidnapped all of the famous Atari videogame characters to make way for the Nintendo Entertainment System.

Are you loving this sh*t or what?

We are treated with that typical Dr. Floyd flavour. Nice pixel art of famous classic videogame characters. However, the Atari STe version also features amazing 8 way parallax scrolling (up to 3 layers), loads of colors, weather effects, cut-scene graphics and much more. Sure, Crash Time Plumber might be based on a single screen game, this is not the case here. And everything runs silky smooth. The best I have seen on my STe in a long time.

Very minimalistic music. The tune during gameplay is very effective, I mean, it pumps you up, it gets on your nerves. It does the job. It is a beat, nothing more. But technically, for an STe, it isn't much. I don't want to 'sound' negative, I just wonder if this beautiful product would benefit with some kick ass YM chiptunes?

Crash Time Plumber is a classic Donkey Kong clone ... with a twist. You start at the bottom of the screen and need to climb the platforms until you reach the top where you can save the aforementioned video game characters. All this while avoiding the rolling barrels, which are thrown at you by Mario or Luigi. But there is more. Where is Donkey Kong, you might ask? He is climbing a chain on the left of the screen, following you every move and throwing bananas. The final platform however, is unreachable for you. There is another twist. You have a 'heart' gauge at the bottom of the screen that needs to be filled up. To do this, you need to grab the hearts, which are randomly sent by the nurse in the balloon. Are you still following?

So in the end, you need to avoid the barrels and the bananas and grab as many hearts as you can to become invincible and capable of jumping to the top platform and save the character for that level. And all this within 120 seconds! Once you accomplish this mission, Mario and Luigi flee the scene and you are lead to the next level. There are 10 levels for you to complete until you are presented with the end sequence.

The first few levels are a breeze, with difficulty increasing gradually. After the first level, the barrels will roll faster, Donkey Kong throws more bananas, wind effects will make your life miserable... That kind of stuff. By level 6 you really want to grab a banana and shove it up that ape's *ss. Believe me, this game becomes frustratingly difficult. A real challenge. To boost your score, there are also bonus items scattered around the level.

And that is about all there is to it. A very original take on games like Donkey Kong and Popeye (So the manual says, I never played Popeye so I can't comment on that). And everything is so very well executed.

This is just a superb game. On a technical level, as well as game play wise. It is a real challenge, very addictive, with a 'Let's give it another go' factor going through the roof. An original idea, highly recommended for every classic arcade game fanatic.

I just hope Templeton stays motivated to create products like this. I can't wait to see what is going to happen in 2019. I'm a big fan!

And even though Crash Time Plumber is an ace (free) game, I do wonder what can be done with what we have here. A great game engine, a fantastic idea. What if a 2 player mode would be implemented? And different types of levels? And some boss battles? I'm dreaming again here. Seems these amazing Cerebral Vortex games have that effect on me ;-)

What a great product! Go play it now.

Stefan Lindberg
Another Donkey Kong clone is Monkey Business ... a very early ST game (1985).
July 29, 2018
ST Graveyard
Actually, there was at least one Donkey Kong clone. A game by the one and only Dave Munsie, Kid Kong.
July 4, 2018
AtariCrypt
Absolutely brilliant review!!<br />I also wonder if other developers could use this engine for other games...But let's hope he continues this run. Exciting stuff.
July 1, 2018