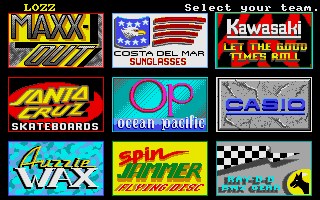 Choose a sponsor, wait for your friends to join in and start the fun ! 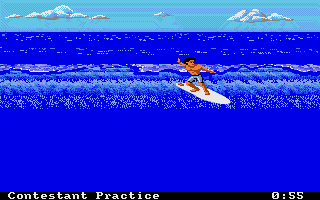 Riding the wave ! Try to keep a good balance, or you' ll soon become food for the sharks... 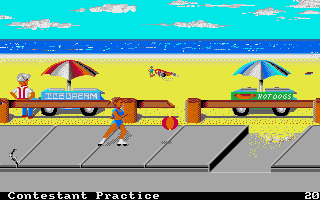 A nice stroll on your skates. Be careful, the path is filled with obstacles and bouncy things. 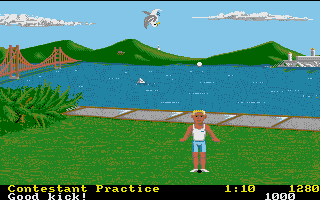 Try to hit the seagull for a lot of bonus points.

A major hit on the old Commodore 64, California Games was an incredibly stunning game for 1987 standards. It managed to recreate perfectly all those californian clicheès: those hot breezes, the sea, the sun, sand between your toes... anyway, this is an extremely enjoyable multi-event sports sim in the good ol' Epyx fashion, probably the best one ever produced.


Events include halfpipe, BMX racing, skating, surfing, footbag and frisbee. Each one is well made and intriguing in its own way; basically, it' s just a matter of making a few tricks and figures within a limited amount of time, but with a great appeal and playability.

Being a very old game, graphics -animations, particularly - are not exactly the state of the art, but they' re pretty clear and detailed, and very good for their time. The main flaw is that they' re just too similar to those of the C64 version, so I guess that those guys at Epyx could have made a better effort on a 16 bit machine, but never mind...

Once again, it' s the same sound heard on the C64, and considering the ST' s Yamaha chip horrible limitations it' s not too bad. A nice collection of Cali - style chip tunes, and some sparse fx.

Here' s where the game becomes really good. As I said before, it' s basically a matter of making tricks and figures and try to score more points than your friends, but it' s still very enjoyable; each event has its own peculiarities and strategies, and even if some are really hard you' ll soon get the hang of them after a little practice.

This is not a game to play on your own; the complete lack of an AI-controlled opponent makes a single-player game very boring, only good for practice. But play it along with a few friends - the more, the better - and you get one of the most enjoyable multi-event games EVER. And THE best on the ST, also considering the lack of other decent titles. Totally radical, dudes !