King's Quest 4 - The Perils of Rosella

King's Quest 4 - The Perils of Rosella

You push the grey button and suddenly you hear a familiar sound, the whirring noise of the fan. A few seconds and the OS is loaded...

You see nothing special. As usual, Cameron Diaz smiles at you from your wallpaper.

You click twice on the Wordpad icon, and after a second the program is loaded.


In 1980 an american woman, Roberta Williams, together with her husband Ken, released a game for the Apple II called, quite simply, "Adventure", written and programmed, as she says, in the family kitchen. It was a text adventure with graphics, like many others, but for the first time graphics were not just standing still on the background, they were truly a significant part of the gameplay. Shortly after, the couple released te first chapter of the King's Quest saga, a game that was going to leave a heavy mark on gaming history, the first great graphic adventure...


... In KQ1 the main character, Sir Graham, had to show worthy in front of the old king of Daventry in order to inherit the throne after his majesty' s death; in KQ2 our hero, now King Graham, has to find a wife and you can bet he won' t just take the first b*tch passing by; In KQ3 our hero is Gwydon, a poor guy that takes care of an evil wizard' s house, and the whole story is somehow connected with Graham and his family; and now, in KQ4, King Graham has grown quite old, and is struck by a terrible curse; only a fairy in a distant land knows how to save him, and so his daughter, Rosella, travels to the land of Tamir on a quest to save her dad...

Quite good, with big, colourful backgrounds. Too bad the whole thing shows little attention to detail, but stil, this is a 1988 game, and the graphics are much better than the standard of that period. The only real drawback is that a few important objects can be really difficult to spot.

This game is the end of an era. It was the last important graphic adventure to use text - based commands before Zak Mc Craken, Lucasfilm games and the IMUSE point & click controls. And the text interface is really well developed; it has answers for a lot of words and phrases, and you' ll hardly see the old damn "sorry, I don' t understand" message.


This is a difficult game, definitely NOT for the unexperienced adventure gamer. Many items are hard to find, and many puzzles are very hard to solve. Oh, and by the way, Rosella has a wicked tendency to die very often. For example, when she falls down a 2 metres high slope she' ll almost certainly crash down as if she dived from a skyscraper. Well, I know, she' s a princess, a fragile and sweet little girl, not the Lara Croft type...


KQ4 is filled with fairy tale stereotypes. Unicorns, fauns, the seven dwarfs, "Pinocchio"' s whale, ogres, evil witches - they' re all here. I used to like this game very much ten years ago, but now, after seeing "Shrek" on the big screen, I think it lacks irony; there aren' t funny jokes or sketches as in the "Monkey Island" saga, for example, and the fairytale quotations, honestly, are a messy potpourri of stereotypes with little or no humour.

Anyway, if you' ve never played a text - based adventure, you should at least give it a try. This is still a good game, despite what I' ve just said. And it' s one of the deepest, most challenging graphic adventures of its time. 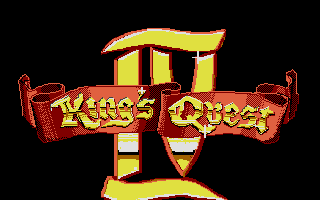 King Graham is getting old, and the kids are growing up fast... 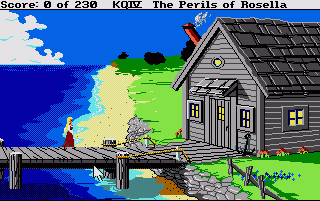 The old fisherman' s house. Help the poor man and you' ll be rewarded... 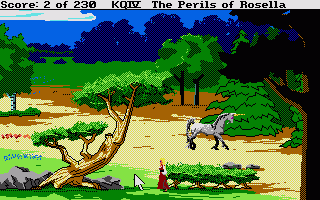 Hey, a unicorn ! Kill him, the horn alone is probably worth millions on the black market ! 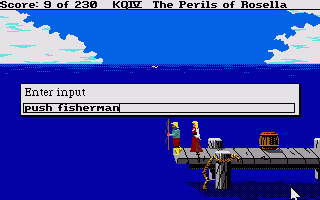 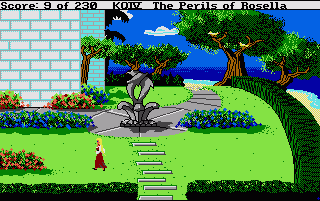 The garden under the palace of Genesta, the good fairy. Hell, where did a GOOD fairy get the money for something like this ? 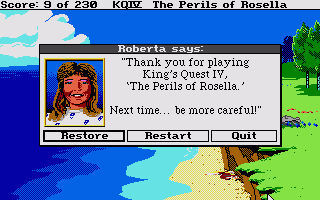 You' re gonna see this message a LOT of times, believe me, so don' t forget to save often !