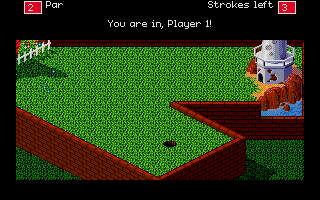 Each level requires a different strategy... 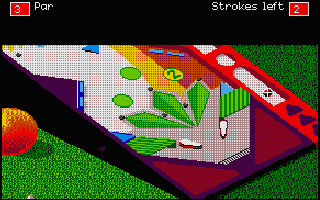 The Pinball hole. Weird but funny. 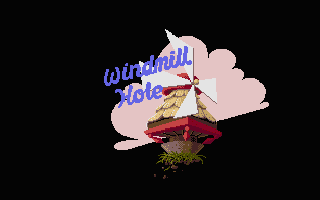 The first hole. Quite easy, but entering that damn windmill is a hard task... 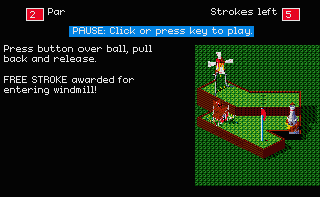 There' s a small briefing for each hole. 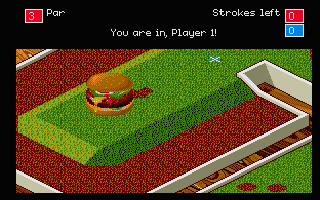 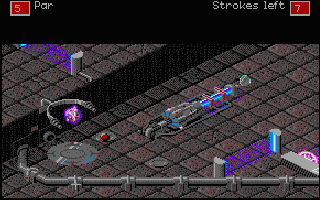 Do you know golf ? That old English sport where snobbish-looking people aimlessly wander around a large field, hitting a ball with a club and trying to send it into a small hole? Well, forget it... this isn't actually a golf sim. This is an old arcade game involving bouncing burgers, pinballs, windmills, fairies and magic carpets. And it's much funnier than the real thing.

Nice, colourful and detailed, almost the state of the art considering it was released in 1988. All of the 9 different holes are well drawn and each one is really peculiar in its own way. Shame about the scrolling though, it can be slow and jerky sometimes, but thanksfully that doesn't affect the gameplay too much.

Just a little tune and some sparse fx. Nothing to gape at, but not too bad either.

This game features 9 holes, each one with its own particular features and strategies; in Burger Hole, for example, we'll have to make a REALLY big burger bounce over the hole. In the Pinball Hole, as the name suggests, the golf ball will turn into a pinball and we'll have to make it bounce right to the putt. Sometimes a fairy will appear, and hitting her will award a few bonus strokes.


The great thing about this game is its excellent playability. Difficult to master, but very straight-forward to learn and play. It may be dated even for an ST game, but it has a distinct "let's give it another go" factor that used to keep me up playing till late night.


Real golf bores me to death, but this game is truly funny. You don't have to choose the right club out of a set of thirty, or to calculate the wind direction and intensity, or the friction of the terrain; just hit the ball and try to send it inside the hole.

An oldie but goldie, this game is still very playable after 13 years from its first release. Each hole is a pleasure to play and filled with bonuses, secrets and weird bouncy things. However, if you like real golf, you'd better leave this one alone and try Microprose Golf or World Class Leaderboard instead.