Sometimes, a programmer comes out with a simple, yet brilliant idea. Take Tetris for example: in 1987 a russian guy designs a little game with falling tiles, and suddenly the "puzzle game" category is born, with hundreds of new titles like Welltris, Hatris, Klax, Puzzle Bobble... just to name a few. In 1991 a genius called Sid Meier, already famous for games like the wonderful Railroad Tycoon, released a game that rewrote the concept of "god-game", born a few years earlier with Bullfrog' s Populous; in this game you control a whole civilization, developing it from 4000 BC to 2050 AD, from the discoveries of alphabet and cerimonial burial to those of robotics and superconductors.

Graphics have never been an important feature in strategy games, really. In a game like this, a good map and some clear icons are much more important than big sprites, smooth scrolling and stunning colours. This game features simple, yet effective graphics; you have a map, a menu bar and many icons representing your units. Nothing really impressive, of course, but very user - friendly.

Well, there is some insignificant tune and sparse fx, but they are quite horrible and anyway superfluous in a game like this. To be honest, if the same sound had been in, let' s say, a colourful platform game, I would have given it a 3/10 or worse. But I won' t be picky about it this time...

You start with a little tribe of settlers. Build your first town on a suitable location. Create some warriors, and send them to explore the world around you, while your people discover new technology and enlarge the town with new buildings. Eventually, your civilization will expand, you' ll found new cities and meet other peoples. You may crush them, ignore them, or maybe even sign an alliance with them. Everything in this game is really up to you...


... more than in any other strategy game, possibly. This isn' t a mission-based, real-time game like Populous or Powermonger; this is a turn-based game where you can take all the time you want to think, plan and make experiments. Also, the lack of increasingly difficult missions is really welcome, since you can develope your civilization as you wish from the very beginning of the game.


There are two ways to win the game: either crush all the other civilizations, or win the technology race and be the first to send an airship to colonize Alpha Centauri. Of course, you' ll have to take care of a lot of factors in the meanwhile; economy, civil unrest, technology, diplomatic relations with your neighbours, war, peace... you' ll have a hard time taking care of all these different factors.


But you can handle this. Every new technology you discover enables you to build an improvement that will help you to solve a problem. Let's say, for example, you' ve got a civil disorder problem in town; there are many unhappy citizens, and there' s a high risk of revolt. You should discover cerimonial burial, wich will let you build a temple in your town. A temple lowers the number of unhappy citizens by two, so you should be OK - for now. In the meanwhile, the discovery of cerimonial burial opens the path for other discoveries as well...


Oh, and there are also many other features. Wonders of the world, for example; these are one - time improvements that require a lot of time and resources, but usually have wonderful effects on your civilization. Like the great wall, that gives city walls to all of your town and also forces other nations to offer peace during negotiations, or Darwin' s voyage, that grants you two immediate civilization advances. And there's much, much more...

...but it' s all explained in the accurate built-in help file, the excellent "civilopedia". And besides, this is just a review, there isn' t enough space to write a full manual of a game as complex as this one. This game is a work of art, the masterpiece of a genius. Try it and you won' t be disappointed, but be warned: you' ll need a good deal of time and patience to get anywhere in this game. 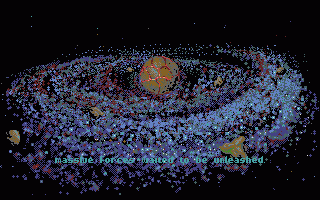 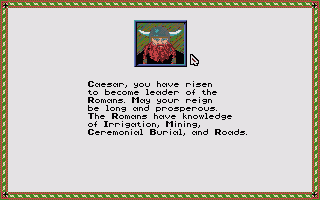 Hey, wasn' t Caesar supposed to shave his beard every morning ? And what about that, um, 'hat' ?!? 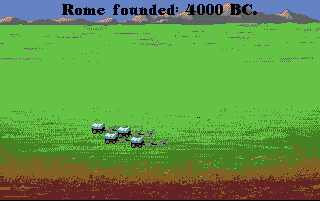 Forget about Romulus and his brother, the wolf, the seven kings; Rome was founded in 4000 B.C. by some western-style colonists, as the picture shows. And yes, it WAS built in a day. 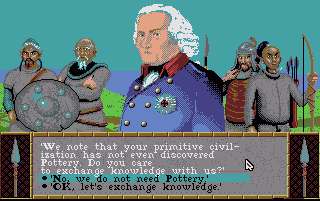 King Frederick of the Germans is pleased to share with us the secret of pottery. What a nice man. 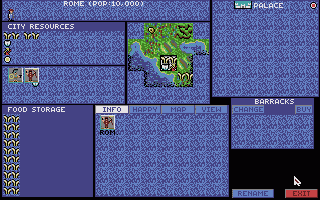 The dawn of an empire. 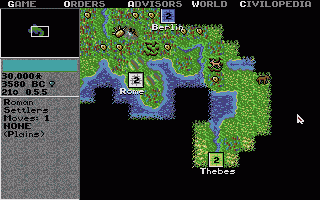 The world map - not a pleasure to the eye maybe, but it does its dirty job damn well. 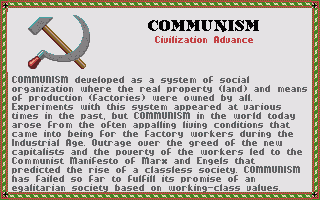 The people' s civilopedia can explain every feature of the game to the masses. Civilization fans of all the world, unite!