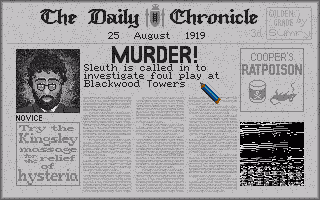 This is you, the wonderful sleuth in all his splendor. A bit hairy perhaps, but you can still change your appearance until you look like Kojak... 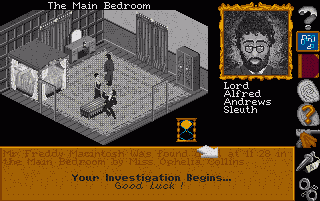 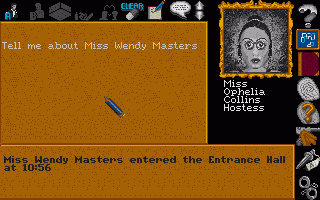 Hmm, this woman seems to know too much... a suspect, maybe ? 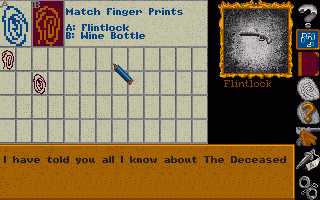 Matching the fingerprints... nope, gues I' m not even close to the solution... 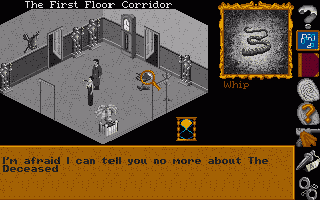 A whip ? In the first floor corridor ?!? Guess I' ll have to investigate on this ladie' s strange sex habits... ;) 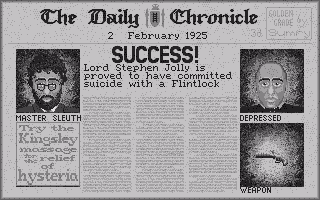 Lord Jolly has been found guilty of the homicide of Lord Jolly. He's been arrested, and will go on trial soon. Probably.

All seems quiet in an old edwardian mansion. A party is going on, and people seem to get on ok, more or less. But then, all of a sudden, a shot... a scream... someone has been murdered. And you, of course, are the master sleuth who' s been called to solve this little annoying problem, but be warned, you' ve only got 2 hours to find the killer before the police comes in.

The grahics screen is quite small and stuck in the top left corner, and the graphics are in black & white, but they' re quite nice anyway. The old fashioned edwardian mansion has been recreated very well, and everything is quite smooth and detailed.

No music, just some decent fx. Nothing technically impressive, but it' s still quite suggestive and manages to create a good atmosphere: there' s the owl out in the woods, the sound of a pendulum, drops falling down the sink... that sort of things.

Let' s start with the options menu: you can choose your sleuth' s appearance, set the date, change the name of the manor and select the difficulty level: this gives you the total of more than 3.000.000 different combinations, and each combination is a new case to investigate !


Once you' ve chosen, the game begins; you are standing on the scene of the crime, and next to you is the person who first found the victim. You can ask him about himself, the victim, his relationships... everything can be useful, so write it down on your notebook. Eventually, you' ll find out about someone who had a reason to kill the poor guy...


... and the next step is to follow the suspects. Try to find out everything about them, and take their fingerprints; then search the weapon they used to kill the victim, and match the fingerprints, if they' re the same... bingo !


But it' s not always so easy. On harder difficulty levels people often lie, and they don' t seem to know anything about the others; also, the victim could have been strangled, and items like the whip or the curtain cord have a rough surface, too rough to leave fingerprints. Again, the victim could just have shot himself, and the killer could just have gone crazy, without a real reason to hurt the victim.

So, is this game worth playing ? Well, yes, it is. 3.000.000 homicides are more than enough to bury a small nation, and even if things get a little bit repetitive after a while, this is a game you' ll still want to pick up now and then. However, if you like action games, or just don' t want to sit down, think and put clues together, avoid it like the plague.