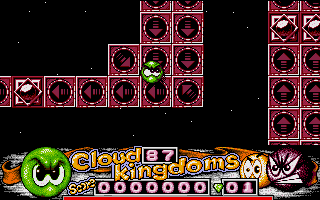 These damn arrows will make you fall down if you' re not extremely careful... 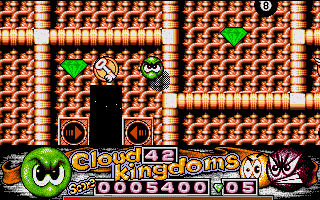 This is one of the easiest kingdoms; have some practice here first... 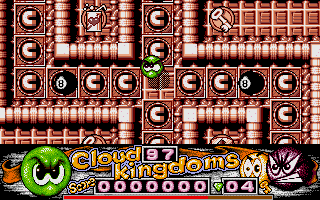 Time your jump carefully, or these balls will crush you in a second ! 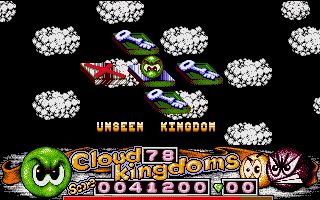 You can challenge levels in any order, so if you get stuck with a kingdom you can always leave it for later... 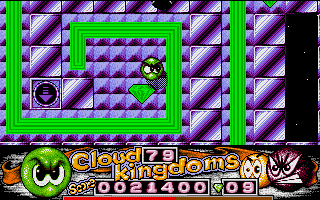 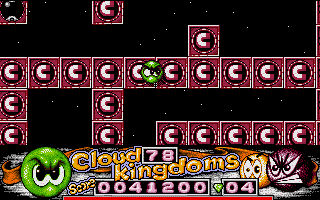 You can' t jump on these magnets, so avoid the balls at all costs... 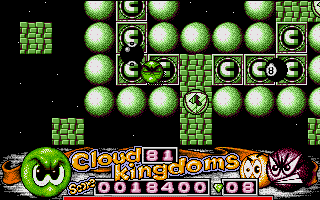 Shields can make you invulnerable for a few seconds. Use them wisely !

Ok, so here is the plot: Terry is a little, eight-way scrolling rubber ball who lives in a peaceful kingdom over the clouds. This kingdom is filled with crystals and Terry has nothing better to do than scroll around and look at these crystals all day. One day a nasty fiend, for some reason, decides that he can't stand Terry's lifestyle and steals all of the crystals from Terry's kingdom. Terry gets quite upset about this and decides to get them back. Now tell me if this isn't the most stupid plot ever! Surely those guys at Millennium didn't have much imagination...

Big, bold, colourful sprites & backgrounds, and a smooth scrolling. Nothing really special anyway, and the menu at the bottom is too big, filling a large part of the screen. After all, it gives the impression of a Commodore 64 game ported to a 16 bit computer, and it loses some of its original charm...

A couple of average chip tunes, and sparse fx.

Well, the plot really sucks, but the game itself is wonderful, an under rated little gem who didn't get the success it deserved. There are more than 20 levels in which you struggle to get your little crystals back; Things aren't very easy, there's a strict time limit for each level, and little annoying billiard balls and bugs such as insects (not programming faults) that can take off some of your energy. Again, don't forget that you're a rubber ball filled with air, and therefore things like acid and fire can hurt you quite a lot.


Each level is really peculiar and has its own strategies: for example, in Chase Kingdom you're chased by bugs on a magnetic track leading to the crystals; you can't jump to avoid the nasties and you have to be quick and pay attention not to fall off the track. In Unseen Kingdom the walls are invisible and you move around trying to find a path to the crystals. In Ice Kingdom you' ll be sliding and bouncing around all the time, and so on...


This is NOT an easy game. It looks like an improved version of "Quedex", an old 8-bit milestone by Stavros Fasoulas, one of the toughest C64 games ever; you' ll need a great deal of dexterity with your joystick to get at least halfway in the game.

Probably one of the most underrated games in history, Cloud Kingdoms was by far my favourite C64 game, and one of the best platform games I've ever seen. The ST version doesn' t look as good as the C64 one, but it' s still very playable and addictive, and it also features a few more levels. Definitely worth a try.