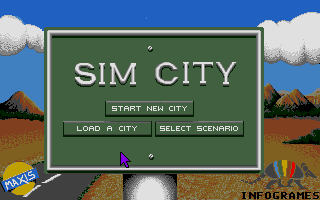 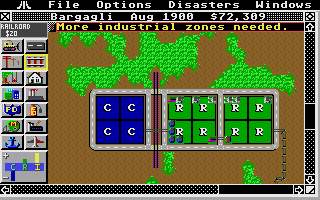 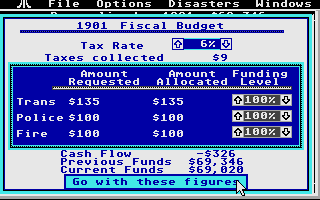 Great, I' ve just started and my balance is already red! 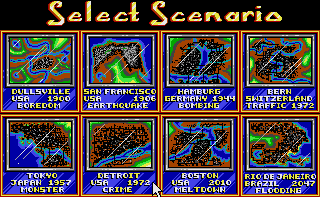 Eight happy tragedies for the joy of every player ! 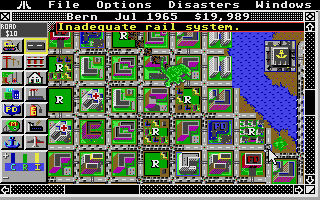 Here' s SimZilla... all you can do is wait until he' s gone and rebuild what he destroyed.

Father of all the games with "Sim" in the title, and one of the greatest classic 16-bit games ever. Sim City is an accurate simulation of all the crap a real mayor has to handle in his career. Never heard of it? Then you're probably kidding, or maybe you've been living on the moon during the last 12 years or so. Ok, seriously, REALLY never heard of it? Fine, read on...

Very simple, yet quite effective. The main graphics window is big enough, and all the buttons and menu are clear, big and easily accessible. The only major drawback is that this game uses the standard GEM interface for graphics and menus; very comfortable and easy to use, but very slow too. An improved graphic interface would have been much better.


The other major drawback is animation. I know it' s not an important factor in a game like this but hey, you can't just draw small black rectangles and pretend they're cars, or paint a big green monster and give him two frames of animation with a FPS rate of 0.5 per light year!

Just a few dull FX, no music at all. Never mind.

Amazing. Or amazingly dull, since this is a real love-it-or-hate-it game. You start with some money and an empty patch of land, and it's up to you to fill it with people. Start with a few sparse houses, a couple of crossroads and perhaps a coal power plant to make things work; gather your first, well earned taxes and go on, building new improvements such as harbours, airports, and perhaps a stadium or two; and so on, until you end up with the metropolis of your dreams...


...but don' t think it' s gonna be an easy task ! You'll have to keep an eye on many different factors that can turn your town into hell on earth: crime, traffic, pollution, fires... and if you think you ain't had enough problems, you can always bring some additional disgrace from the handy "disasters" menu. Fancy a major earthquake? A nice tornado, perhaps? Or a big green godzilla-shaped monster eating your buildings? You just have to ask!


This game has a virtually endless life span; you can play one of the eight scenarios included, and try to solve your town' s troubles before the time limit, or build your city from scrap and go on indefinitely. Boring? Well, yes maybe, after dozens and dozens of sleepless nights spent in front of your monitor...

If the 1998 Guinness world book of records describes Sim City as the best selling computer game EVER, there has to be a reason. And the reason is that, despite its pretty bad graphics and a few minor flaws, this game still rules. This is a milestone for 90% of the strategy games released in the last 12 years, not to mention titles like Sim Earth, Sim Ant, Sim Town and The Sims... If you ever played something with a "sim" inside the title, then try out the game that started it all!