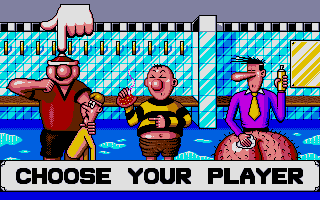 The, er, 'players'. Choose between these three smart, athletic guys. 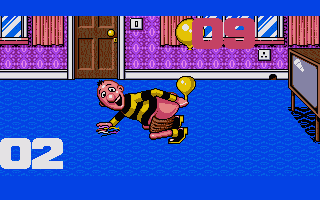 If you ever hoped to inflate balloons with your intestinal gas, now this is your chance ! 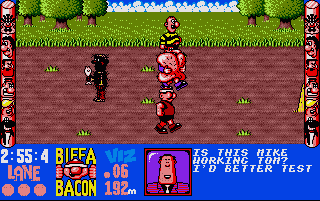 The beginnign of the first race. The guy on the TV is extremely anoying, but at least the scrolling text diverts your attention from the main screen... 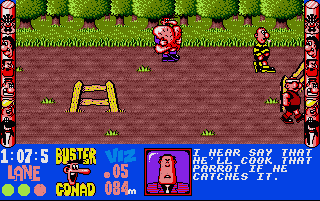 Buster Gonad, a man with an enviable, but embarassing handicap. 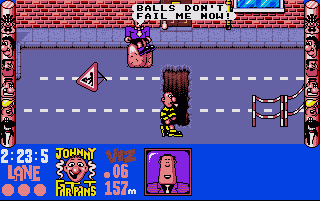 Every man has to say these words sooner or later. But Buster has a wider range of pratical interpretations ! 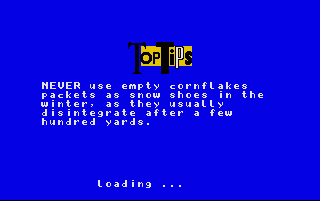 These pearls of wisdom appear before each level. This is actually one of the funniest, go figure the others... 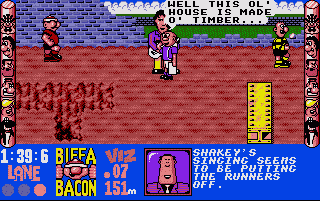 One of the last levels. How did I get this far in the game ? Well, cheating, of course ! Just type in 'what a great load of b*ll*cks' (replace * with appropriate letter) and press 1-5 to select your level !

Ok, so Viz is a... how would I describe it? A racing game? An arcade? Well, let's put it like this: based on a popular British (adult) comic strip, this game features three quite disgusting guys trying to run to the end of the level, while avoiding obstacles of a not-so-hilarious nature.


Each one of the three guys has a particular skill: Biffa Bacon, the most respectable of the bunch, is a violent brute always ready to hit anyone; Johnny Fartpants is propelled by powerful gas emissions; and, last but not least, Buster Gonad can bunch on his, er, "family jewels" or put 'em in a cart and run faster.

Nice, well drawn backgrounds and big sprites, colourful and detailed. No 3D - parallax - raytracing stuff, but it still has really good graphics in its own simple, yet effective way.

Standard chip tunes only, but they were written by the great Jeroen Tel of Maniacs of Noise. He's made better tunes, alright, but surely you won' t be turning off your speakers. Atari ST conversion of the music was by Sound Images.

Awful. I couldn' t find a better word to describe it. There are only five levels, and the game could be completed in 15 minutes if the obstacles were easy. But the programmers must have noticed this, and so they decided to make it incredibly hard to improve its lastability.


And the jokes are incredibly stupid. I mean, a guy bouncing on his balls or flying by his farts can be fun if, say, you're 13 AND particularly dumb AND full of spots on your face (yeah, that' s compulsory). And even side characters are somewhat irritating, and not funny at all.

So if you are 13 AND stupid, or if you like burping out loud at parties, scratching your balls in public and generally stinking like a goat, then this could be the game of your life.


If, instead, you like British humour, you' d better start reading Terry Pratchett. Or watch the Monty Python's Flying Circus. Or phone a British friend. Do anything else, but don't play this game !!!