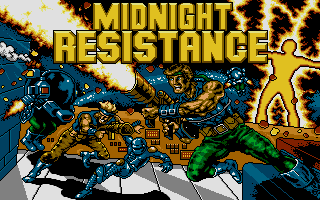 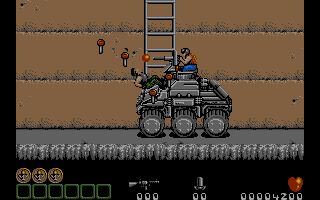 This guy isn' t an end of level boss, but he' s still tougher than the average enemy. 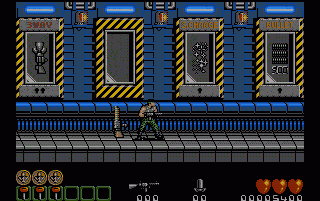 Time for some shopping in the 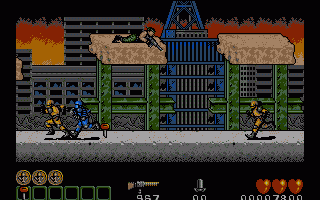 Look how they' re fleeing away, the wimps, scared by your terrifying presence... 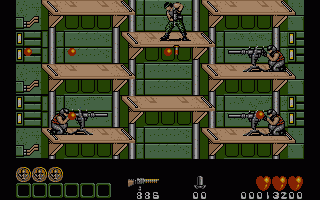 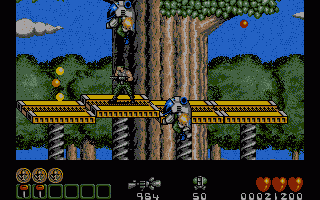 An open country scenario. Breath some good air and relax. Respect nature, throw enemy corpses in the opposite trashcans... 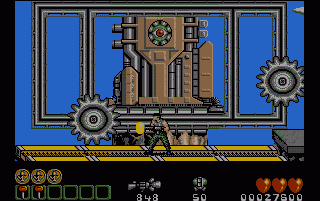 An undefined boss of some sort.

This game features one of the most original, intriguing plots of the last centuries: you are the grandson of an elderly scientist who appears to be a genius at creating new powerful weapons. A wicked criminal has kidnapped the man and, appearingly, some other members of the family... your girlfriend, your sister, mum, dad etc. Of course you are a muscular thug with no brains, and instead of calling the police or asking a favour to mafia you decide to go all alone with some heavy gun, kill all the baddies and set your relatives free... hey, haven' t I heard this all before ?

Nice and colourful, with some pretty big sprites. The 9 levels feature many different locations and landscapes, all of them, of course, filled with more firepower than even Saddam could ever want. Strangely enough, your character runs as fast as a turtle and jumps as high as a kangaroo; not very realistic, but then, to be honest, the whole thing of a single idiot with a gun fighting hordes of enemies armed to the teeth ISN' T very realistic at all, so let' s close an eye on this...

Boom ! Bang ! Pow ! Ka- boom ! Buddabuddabudda ! Yes, it' s all like this. There' s also some little chip music, but nothing particularly worthy.

Run. Jump. Kill. Avoid bullets. Kill. And so on, but if you' re looking for a relaxing ol' shooter that requires little or no mental effort, then don' t look any further. This game is actually good in its own overpopulated category; it' s not too difficult or too easy, and the levels are varied enough to make you want to see what' s coming next.


Some of the guys you' ll kill will drop some keys; yes, I know, they LOOK like Chupa Chups, but they ARE keys, believe me. Eventually, at the end of each level, you' ll reach a room filled with particularly powerful guns, ammo, and other weapons; the more keys you collect, the more of this stuff you' ll be able to take.


Another clicheè of this kind of games is the end - of - level boss; no self respecting shoot 'em up comes without a few really tough enemies, usually strange, very big or riding some sort of tank; once again, Midnight Resistance is no exception. You' ll have to fight big tanks, burning men sliding up and down a pole, big green things spitting fire bullets, and so on... but then again, it' s OK if you like this sort of things, ain' t it ?

This isn't the game of the century, or one that you can' t miss at any cost, but overall it' s still good fun. Ok, It' s all been already seen before, but it' s still a good, playable game. Anyway, if you' re looking for a blaster that requires your brain to be switched on, you' d better go for something like "The Chaos Engine" or "First Samurai" instead.