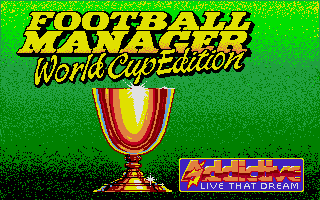 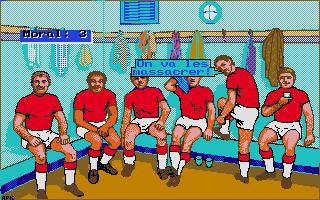 Briefing with your team. The second player from the left is probably 70 years old but he 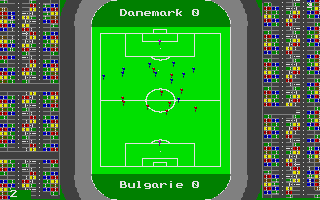 If anyone cares, Danemark and Bulgarie are still 0-0. 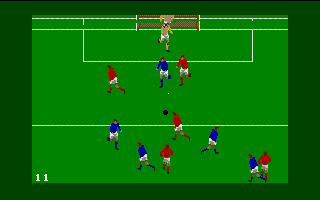 FMWCE: an unique blend of action, strategy and sprites moving randomly around the screen. 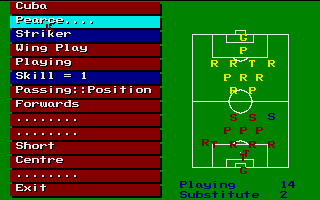 Half time: gonna make a few changes now, let' s see if we can cheat and put 16 players on the pitch... 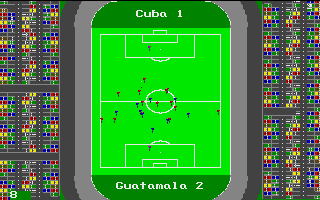 In 1981, a man named Kevin Toms programmed a small game on a Tandy TRS80 , all by himself, and called it "Football Manager". It was, to my knowledge, the first sports management simulator ever, and a good one too. He converted it to run on a Spectrum 48k, and started selling it, with enormous success. He founded his company, Addictive, and year after year he released more Football Management simulations... until 1990, when he came out with "Football Manager: World Cup Edition". This game was mercifully spared by the critics after his first release. Now, 11 years after, it' s time to bring some justice...

Just take a look at the screenshots... There are only two off-game screens in the game, one with a few journalists and one in your team' s dressing room, and they' re both pretty horrible. During the match you can choose two types of view, a fixed view from the top and the in-game view. The first looks like it' s been drawn in 5 minutes by a kid with his crayons, but the second is even worse since the players have only 3 frames of animation, and the scrolling is slow and jerky.

Sound ? Is there any sound in this game ? Hang on, I' m sure I' ve heard some beeping noise, but can' t remember when and for what reason... dunno, maybe it' s just my imagination !

Just choose the national team you wish to control, and the game itself begins... you' ll have to qualify for the 1990 world cup, and then, possibly, try to become the new world champion. Before each game, you can set two factors, i.e. "ball bounce height" and "ball bounce percent". Don' t know what they mean. After that, you' ll have to talk to the journalists and to your players, giving stupid answers to even more stupid questions. Your team' s morale will then randomly increase or decrease, no matter what you actually say.


Then comes the so-called "tactics" section. Here you can choose your formation and give a few orders to your players. This is probably the best section of the game... too bad that none of the moves you make seem to have an effect on the game, and that even player names are the same with every national team, so if you' re in charge of, let' s say, Cuba, you' ll still play with Shilton and Lineker. Well, at least you can change those names, but mr. Toms could at least have included some more players...


...and then comes the match, with 22 sprites chasing the ball up and down the pitch. Forget positions, tactics, team orders: every single player will be chasing the ball, with the only exception of the goalies. The result is pretty humorous, but it looks more like a riot than a real football match. Full stop. There' s nothing more in this game, and so I guess it' s time for the...

If this was a PD game, it would deserve a 4/10. But this is a commercial game, and it was released at full price, even with its horrible graphics and nonexistent gameplay. I guess it was programmed in a week or so. In other words, I hereby declare "Football Manager: World Cup Edition" the worst ST game ever (IMHO, of course)! Good work, Kevin !