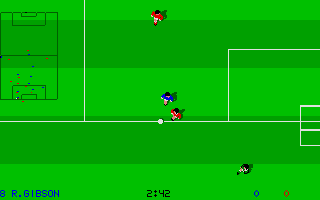 Yep, the arcade section is the good ol' Kick Off ! 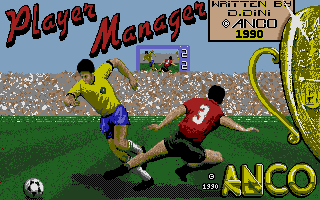 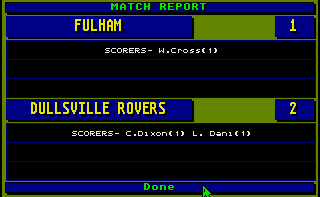 A stunning victory for Dullsville Rovers ! 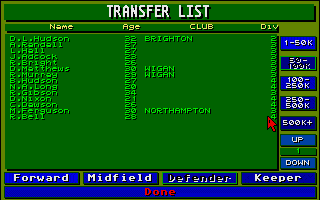 Here' s a list of the players you can buy. 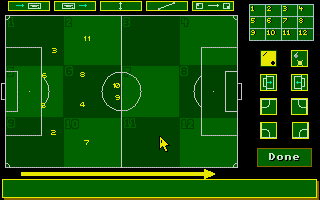 In the begining, there were soccer games. Oh well, "soccer" is kind of a big word here; the proper definition would be "pseudo-sports games featuring a few sprites moving on a green background with a ball glued to their feet". Some were good, some were bad, but that' s what they were. Then, in 1989, a man called Dino Dini told himself: "hey, this thing about the ball glued to the player' s feet is pretty stupid and unrealistic, I' m gonna try something new in my new game". And so, the legend of Kick Off was born...


One year later, Kick Off was a bestseller in Europe, and Dino told himself: "ok, the game is a great success, now if I just added a small management section...". And so he did, and the new game was called Player Manager...

First of all, sorry for the rather pompous introduction, but I tend to become biblic when I speak of Dino Dini. Well, back on topic now... Graphics are, er. not very good at all. Your team' s jersey is always bleu and the opponent' s always red, no way to change it.


Unlike Sensible Soccer, Player Manager (just like the rest of the Kick Off series) looks much uglier than the Amiga version. The grass is just a bunch of plain light green - dark green stripes, the white lines are thin and ugly, and the borders of the pitch are empty and undefined. I asked Steve Screech (the guy who did the graphics) himself and he replied that the game would have been slower if he drew the pitch properly. Well, if he says so... BTW, if you want to ask him some question, check out the forum on http://www.kickoff2.cjb.net !

Well, there' s almost no sound at all, just some pretty bad fx... just a screaming crowd and some noises when you hit the ball. To be honest, a little more effort would have been appreciated...


Same as Kick Off, but this time you can also buy and sell players, create your own formations, train your team and play in a real league... wonderful! The tactical section is really great, with a powerful and user-friendly editor. Feel free to try some weird new tactics (3-2-5, with a sweeper and two center forwards, is my favorite) but keep in mind that, if your team doesn't get good results, you'll probably get fired pretty soon...


As the title says, you' re both player and manager of your team. You start in 3rd division, and your goal (obviously) is the top of the premier league. You can choose if you wish to play in position (a real mess, you' ll be hopelessly chasing the ball all the time if you choose this one) or play as team (go for it !). Anyway, your player MUST be on the pitch in order to play the match, otherwise you' ll have no control over your team. This also means that after a few seasons you'll probably be quite old, and your stats and skills will drop vertically. Be warned...

If you liked Kick Off, you' ll love this one. If you like pure football management sims, then maybe you' ll find this one a bit limited, but it's a great game anyway. Highly recomended !