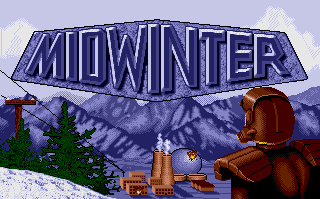 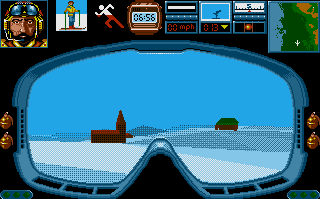 After hours of skiing, a settlement... finally ! 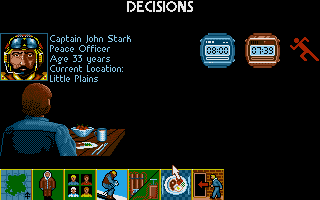 A quick meal, and then back to action... 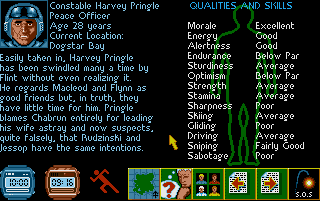 Each character is described very carefully. Don' t forget to take note of their relationships. 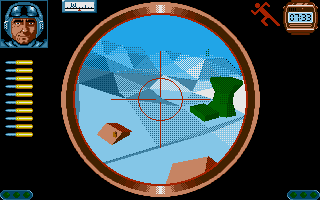 Church towers are perfect for sniping. 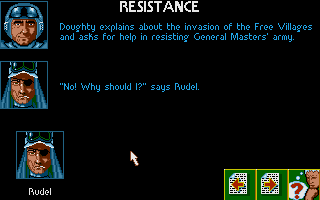 Maybe Konrad Rudel' s not the friendliest chap in the island, but he' s the best sniper in the game, so try to persuade him ! 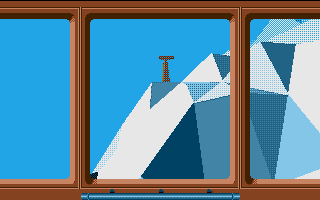 On the cable car. Take off your skis, relax and enjoy the trip. 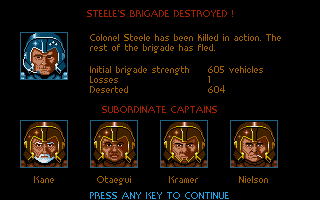 After a long-feared nuclear crisis, the earth became a giant mass of ice. Places once full of people and wildlife had become tundra wastelands. It could have been the end for the human kind, but some places were still warm enough to live in. And the island of Midwinter, in the former Azores archipelagos, was amongst them.


And so, a small group of settlers colonized the newly emerged island. And the settlers grew up, settled, and prospered. Life still went on, more or less peacefully, until evil general Masters planned an invasion, and sent in a huge number of troops to colonize the island and wipe out any possible resistance.


When Captain Stark, head of the local police, heard of the enemy attack, he realized that things were desperate. The enemy had a real, well organized army, while he could only rely on 31 persons to fight off the invader, including two kids, a sweet granny, a few drunkards and a pedlar. Times were desperate, and 32 members were almost certainly no match for general Master's army, but the only possible solution was to jump on his skis and ask them for help...

Half 3D shooter, half strategy game, Midwinter starts with Cpt. Stark, all alone, trying to stop the enemy advance. You start on your skis, but there' s a wide range of vehicles you can climb on, including snowbuggies, cable cars and even hang gliders.


You' ll soon recruit some new members, and each one has his particular attributes, skills and flaws. Konrad Rudel, for example, is a hunter with excellent sniping abilities, but hasn' t got any friends and only a few people can persuade him to help; Amelia Randles is an old lady with abysmal skiing, driving and gliding abilities, but is a perfect recruiter because everybody knows and respects her, and so on...

The 2D graphics are really cool, colorful and really well drawn. 3D graphics are good too, even if not particularly fast and smooth, and there aren' t many objects scattered around the island; what you' re gonna see is snow, snow and even more snow, with a few buildings, trees and cable car pylons here and there.

No music at all, just some decent (more or less) SFX.

Excellent. Once you' ve learned the basic commands and features of this game, you' ll find it extremely addictive and challenging. There' s so much your men can do, and so little time...


Basically, you' ll spend your time travelling between settlements, trying to recruit new members, destroy enemy vehicles and blow up enemy controlled warehouses and synth plants. At the start of the game you control 16 power plants; once they' ve all fallen under control of general Master' s troops, you' ve lost the game. Your main task, instead, is to reach general Master' s headquarters on the south eastern end of the island and blow 'em up, but it won' t be easy...


The basic controls are: X - exits any action mode, M - main map, S - toggle skiing/sniping. The game can be controlled by keyboard and joystick, but mouse controls are better and far more accurate. And of course there' s much, much more you can do...

An excellent blend of strategy and action. This is a wonderful game, still addictive and challenging 12 years after its first release... give it a try !