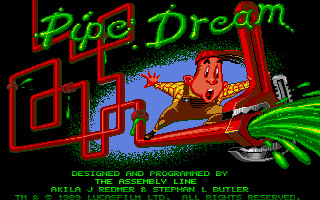 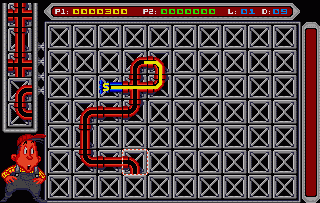 The first level. You' ll have to let the fluid flow through at least 9 pipes; not a hard task, but it' s only the beginning... 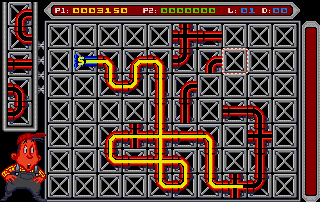 Don' t leave too many unused pipes around the grid, each one will subtract 100 points from our score ! 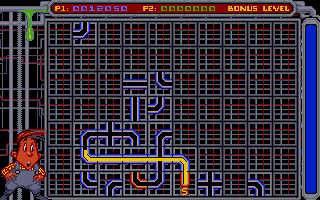 In the bonus level pipes fall from the top, and it' s much harder to arrange them properly... 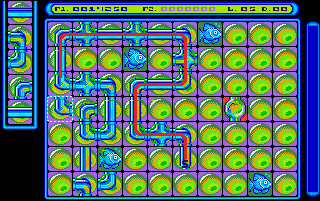 Things are getting harder now, with all these fishes blocking your way. 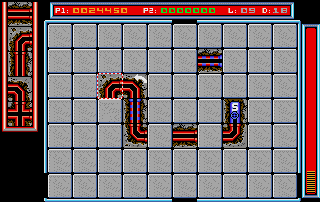 See that arrow ? Some pipes allow the liquid to flow in only one direction... 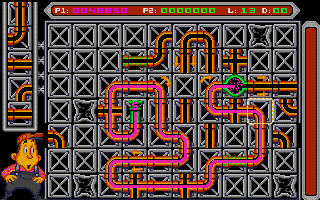 If I say "Lucasfilm Games", then what do you think about ? Well, graphic adventures probably; Monkey Island, Loom, Zak Mc Kracken, Indy & the Last Crusade... right. Anyway, Lucasfilm didn' t only make excellent graphic adventures, but also released a couple of puzzle games. Pipe Dream (AKA Pipe Mania) is their first effort in this area, and quite a good one too...


...so good that it was also converted to an arcade game. Yes, I mean, the ST version came BEFORE the arcade version, not the other way round ! Check out the screenshots ! The coin-op featured a few more bells and whistles, but basically it' s the same thing as the 16-bit version, with better graphics and not much more.

Quite good, but not terrific. There' s a grid, lots of pipes, and not much more... sure, they' re quite well drawn, but you ain' t gonna see breath-taking, hyper-fluid animations in 16 levels of parallax scrolling, or stuff like that. Anyway, graphics aren' t really important in a puzzle game, or at least definitely not as important as a good gameplay.

Slightly above average. No standard YM chip music, but a few little tracker tunes instead. Pretty good choice, considering the soundchip's horrible limitations... all in all, these tunes are quite good, and make a good background for the game.

Simple and addictive. Your goal is to let a green liquid flow around in a grid through a series of pipes; as you go on, things get increasingly difficult, the liquid flows faster and you' ll have to build longer pipeworks in order to go on to the next level; some pieces of pipe allow the liquid to flow on only one direction, some parts of the grid are broken, and stuff like that...


Pipe Dream is incredibly playable. The difficulty level is really well balanced; the first levels are quite easy, to let the player get a good grip of the game; then it becomes harder, but never too difficult and frustrating. Just like Tetris, this is the kind of game that doesn't look or sound great, but can keep you playing glued to your monitor until 2 AM...

A great little game. Just like Tetris, it' s a game without age, still thoroughly enjoyable 13 years after its release. Highly recomended !