6 drivers. 20 tracks. Bikes that can reach 330 km/h. This isn' t Moto GP or Superbike, this is No Second Prize, one of Thalion' s latest ST productions. And one of the best, too...

Well, you' ve seen the screenshots, and maybe you' ve all been wondering what' s so special about it... I mean, there' s the track, the grass, a few obstacles and objects scattered here and there, and the bikes are only made up of a few ugly polygons... yep, alright, but you gotta see the scrolling ! It' s incredibly fast and as smooth as silk, and the fps rate never slows down, even when there are many drivers on the screen... wonderful !!!

Ok, so there' s nothing particularly fancy, only standard chipset music and FX. But the word "standard" doesn' t apply to the YM soundchip when the musician is Big Alec, one of the best composers in the demo scene... NSP features a nice menu soundtrack and a great intro tune. Only average FX though (too bad...)

You can choose between 6 drivers, each one with his highs and lows; Ray, for example, has excellent acceleration, top speed, a sturdy bike and incredibly high physical resistance, but curves awfully; Michelle is an average driver with a low resistance, but nobody curves like her; Fabrizio and Rainer are good all - rounders with no weak points, and so on...


This is, definitely, an arcade game, so don' t expect a realistic simulation; you can brake in curves without losing grip (now TRY doing that with a vespa...) and reach an obscene top speed. Some tracks are filled with obstacles, and there are lots of slow bikes in the circuit, that don' t take part in the actual race and seem to be on the track only to slow you down...


Controls are quite easy and comfortable; as in, let' s say, Hard Drivin', you control your bike using the mouse; right button for gas, left for brakes. You can set mouse sensitivity and choose between manual and automatic gearbox. Same as Hard Drivin', as I said, but thankfully this time the response to your controls are very fast, and so you won' t find your bike steering seconds after moving the mouse (a very frequent problem with HD..).


This game may not be realistic and original, but the result is terribly fun, thanks to a wonderful scrolling and a well calibrated difficulty, never too easy, never frustrating. Think of it as a very improved Super Hang-on...

Fast, furious, challenging and thoroughly enjoyable. 20 tracks, some short and easy, some long, tortuous and filled with obstacles and hazards, are more than enough to keep anyone glued to the monitor for many hours. One of the best arcade driving games ever seen on the ST... highly recommended ! 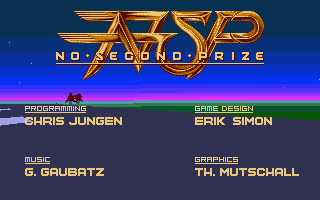 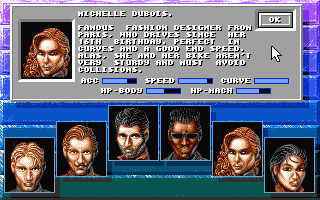 all-rounder, and an excellent choice if you want to race in a full season. 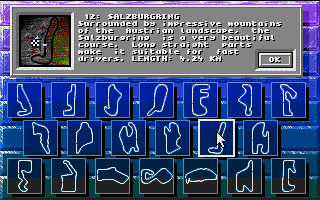 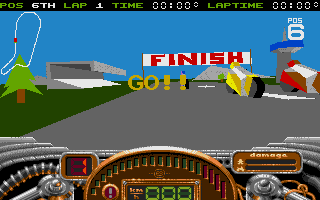 Mallory Park is just slightly more tortuous than an oval, and it' s very short, too... a good circuit for a beginner who wants to improve his skills 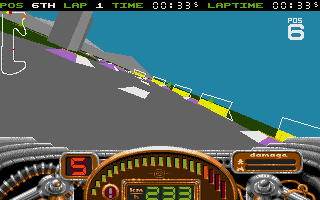 The last circuit of the seasons is literally filled with bumpers, oil and other obstacles... a real nightmare !